The “sharing” of my family’s Cross Country Road Trip 2012 continues… with a three week rest on Boston’s South Shore.

We make a pilgrimage (pun intended, I guess) to Boston’s South Shore every summah.  My husband grew up on the East Coast and spent a good portion of his summers in this cute little town.  We are continuing the tradition with our own son and spending a portion of our summers there too.  We love it! 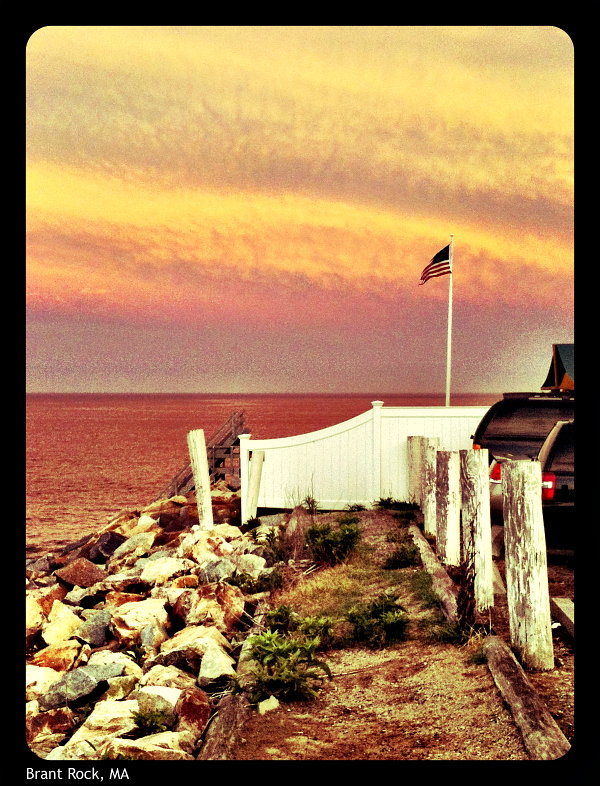 We arrived in the area around the time of our anniversary- our SEVENTEEN YEAR anniversary!  So that called for a dinner at The Fairview Inn.  We’ve never stayed in their hotel, but I hear it’s quite nice.  Dinner is usually very good there, but I think we caught them on an “off” night- not so great.  This view in front of the restaurant though was a keeper. 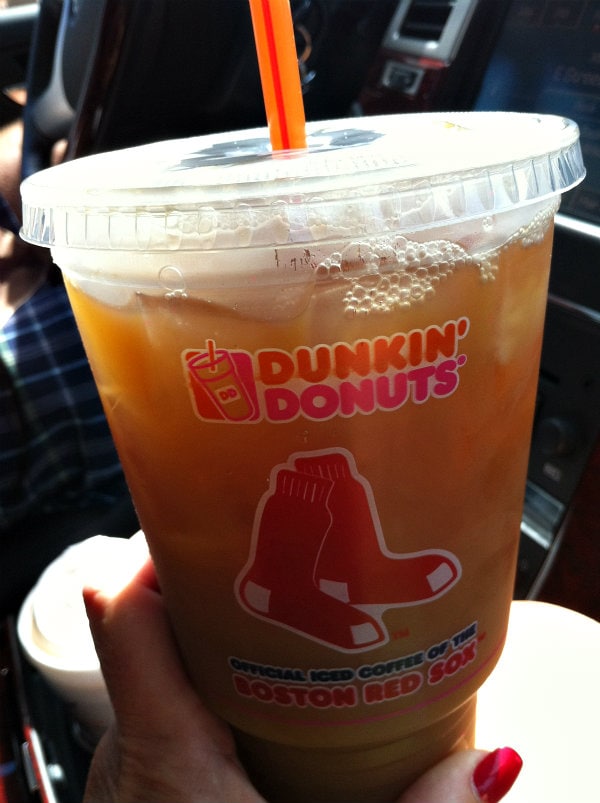 My husband and son are both completely obsessed with Dunkin’ Donuts.  We don’t have D&D in San Diego, so we stop in for our fair share of it when we are back East.  I’m not a big coffee drinker, but I do love a good, sweet, Iced Coffee on a hot New England morning. 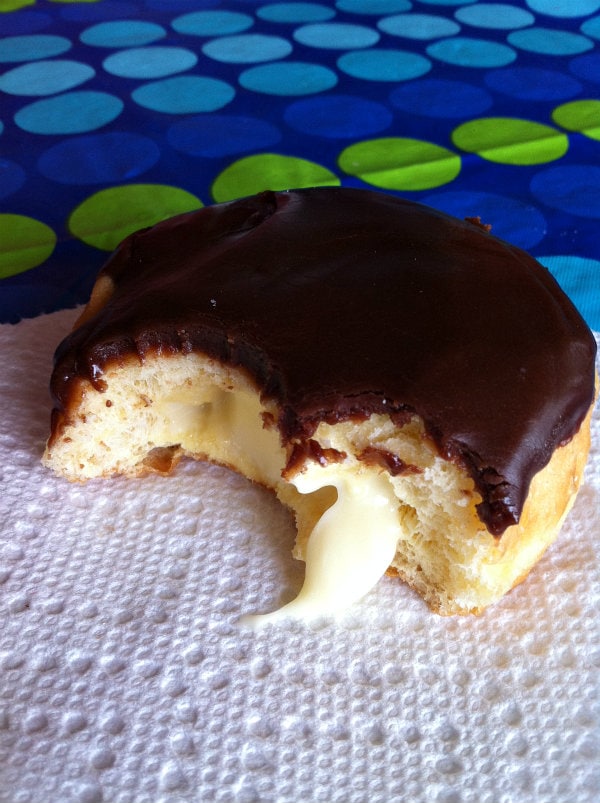 And who could ever pass up a Boston Creme Doughnut (while in Boston?) 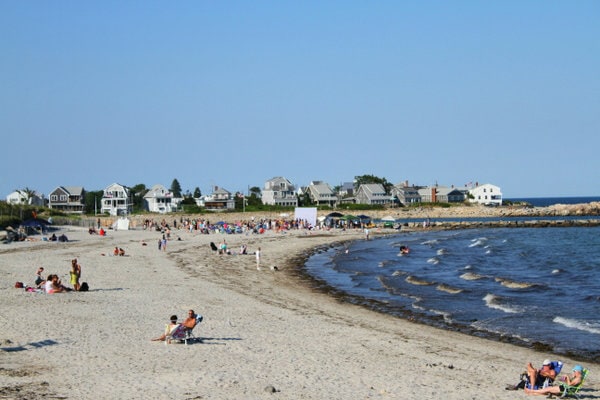 This was our very relaxing view and playground for three weeks on our trip.  Did I mention it was relaxing?

P.S.  Did you notice the sun worshippers facing the other way on the beach… toward the sun?  WHO DOES THAT??  I guess not me. 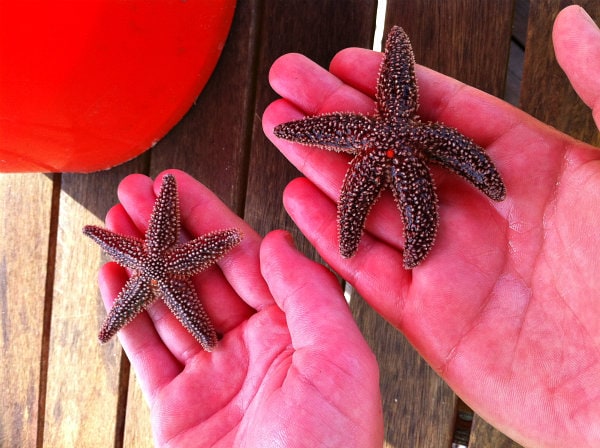 The kids like to explore the Jetty and find sand crabs, bigger crabs and starfish.  And of course they put them back in the ocean before they die (at least they remember to do so most of the time). 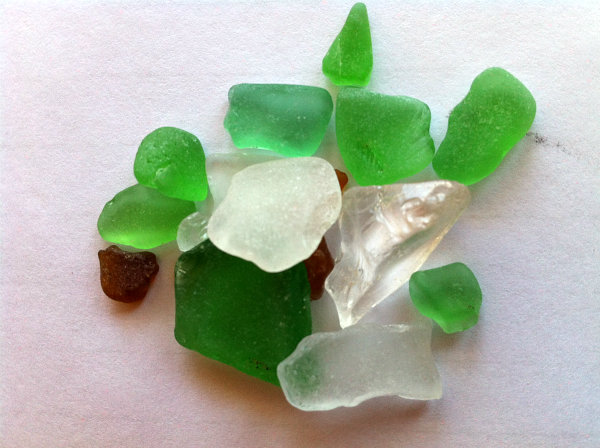 My favorite past time while staying here is going for a long beach walk, dodging biting-green flies and hunting for sea glass.  If you are at all familiar with the beaches of Massachusetts, you know what I’m talking about with the green flies.  They appear sometime in early July, they stay a few weeks, and then they mysteriously disappear.  They dive bomb you and bite you before you even have a chance to realize that they’ve landed on you.  It’s not pretty.  But if you’re lucky, you don’t attract them as much as other people! 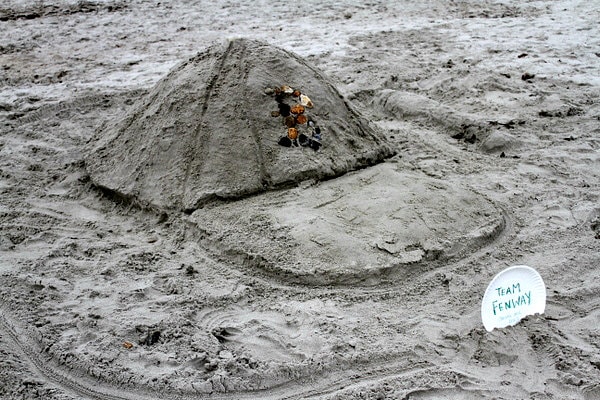 There was a sandcastle contest while we were there.  My RecipeBoy Brooks and his buddy made a Red Sox Baseball Hat (Team Fenway) sandcastle.  They won 1st place in their division since no one else in the contest went with a sport’s theme 🙂 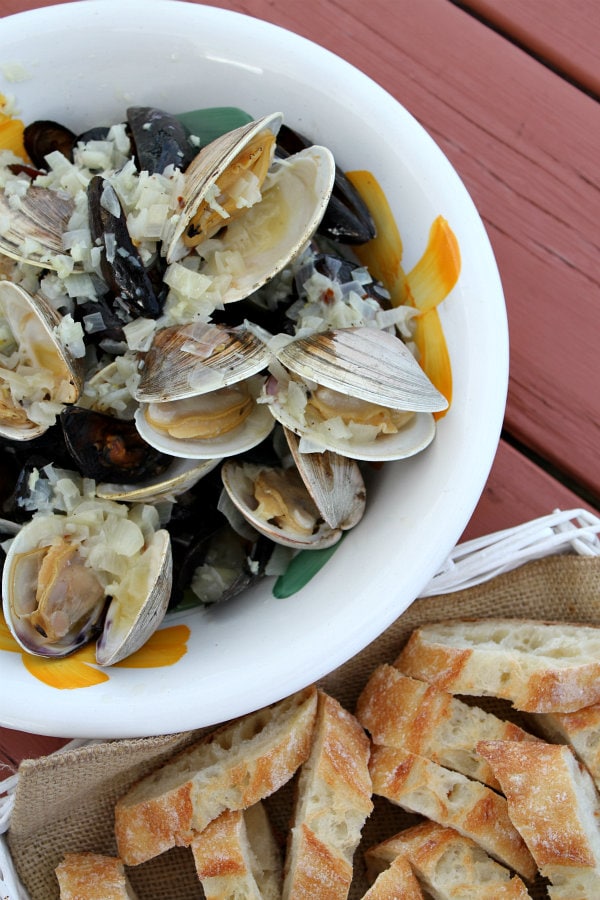 We enjoyed eating LOTS of grilled clams this summer.  That was something we had never, ever done before.  But we’ll be grilling clams every summer now for sure.  SO good. 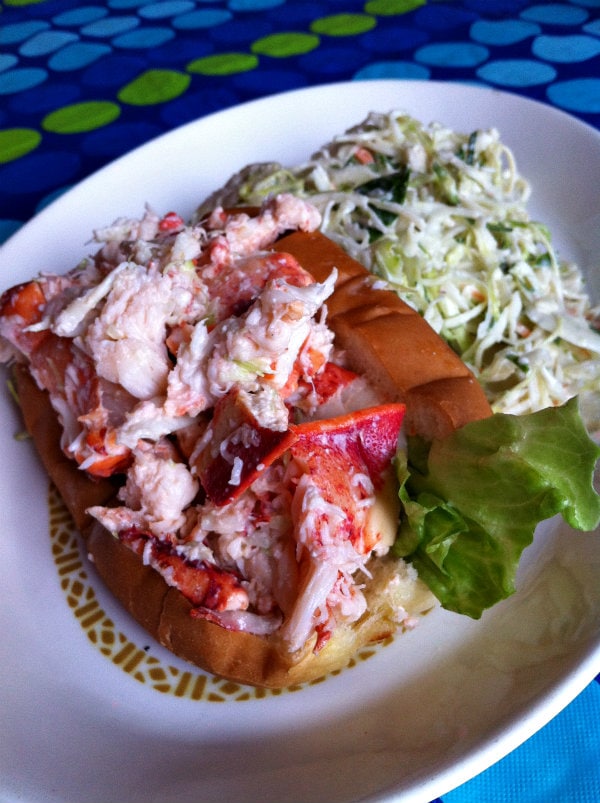 And of course, we ordered our fair share of lobster rolls from local establishments. 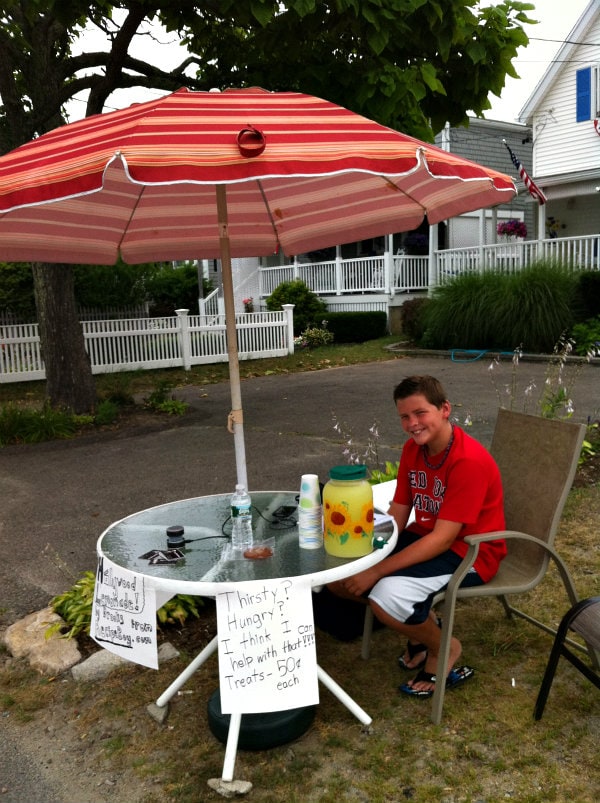 My son decided to put up a lemonade stand for beach-goers on pretty much the hottest and most humid day of the summer.  He made about $20 profit before he couldn’t stand being in the heat anymore. 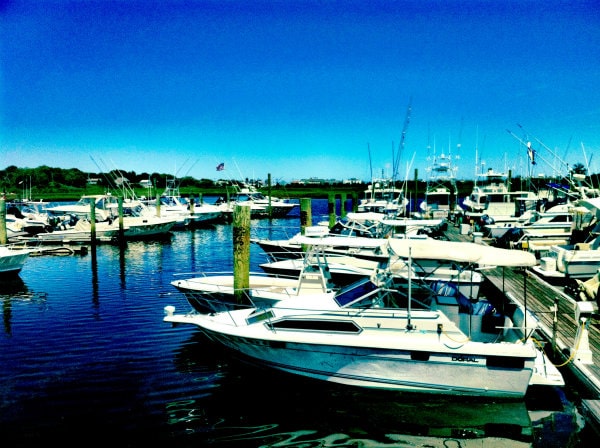 This was our view of the harbor from lunch one day- on a particularly clear and beautiful New England afternoon. 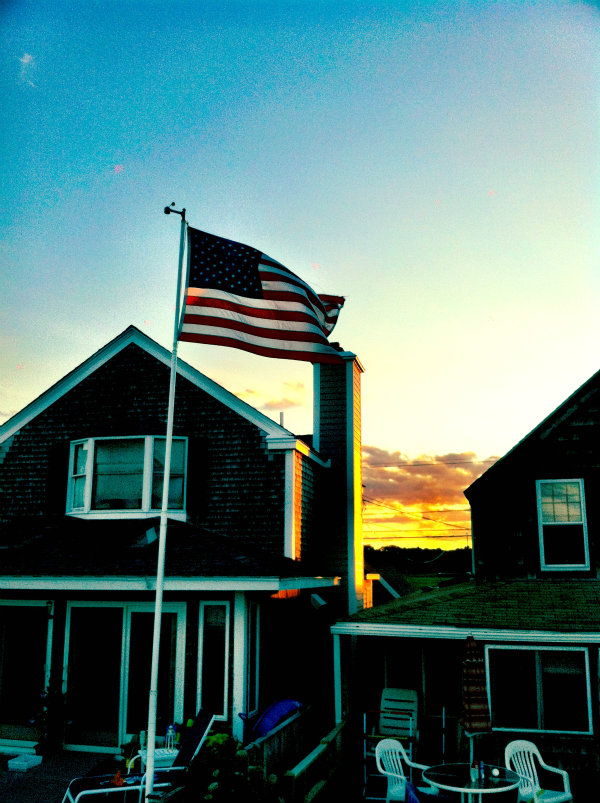 Here’s an East coast sunset.  On the West Coast, the sun sets over the ocean.  On the East Coast, it sets in the opposite direction.  It takes a little getting used to! 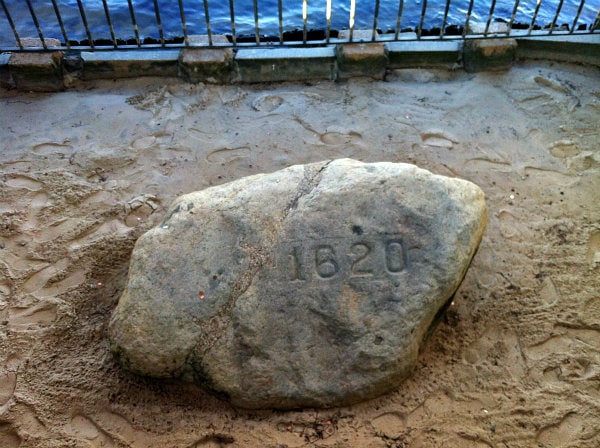 Plymouth is always a fun town to visit- lots of historical stuff to look at (including Plymouth Rock shown here) and shops and restaurants. 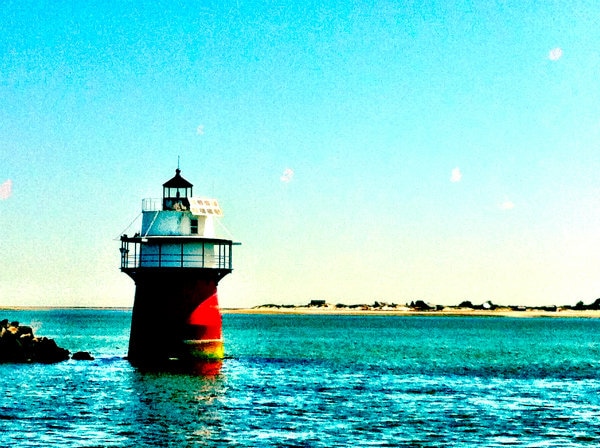 We boarded the Express Ferry in Plymouth and went to Provincetown (P-Town) for the day.  This is a little lighthouse we saw on the way.  I’m enamored with lighthouses- I even have a Pinterest board devoted to lighthouses!

We had fun in P-Town, but it was far more touristy than I remember. 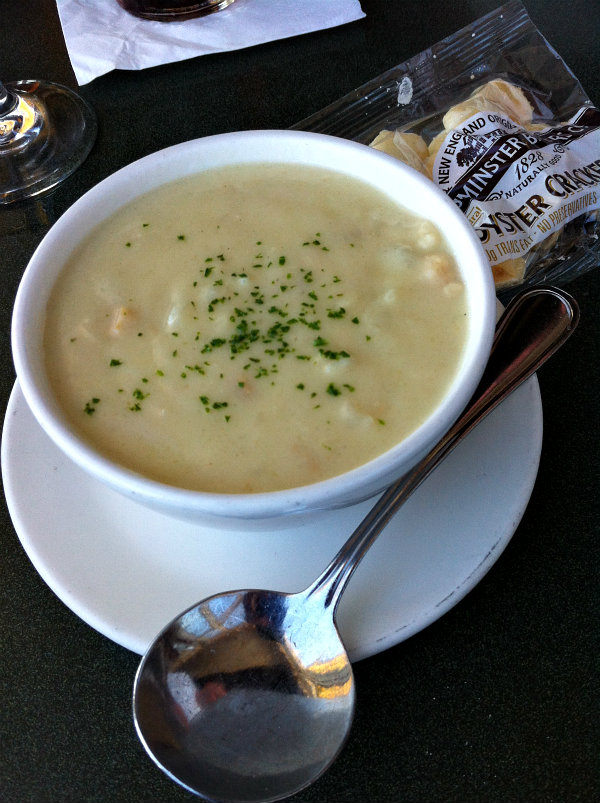 We had a late lunch at The Lobster Pot in Provincetown, where the service was horrible but the food was good!  We had some clam chowder, of course. 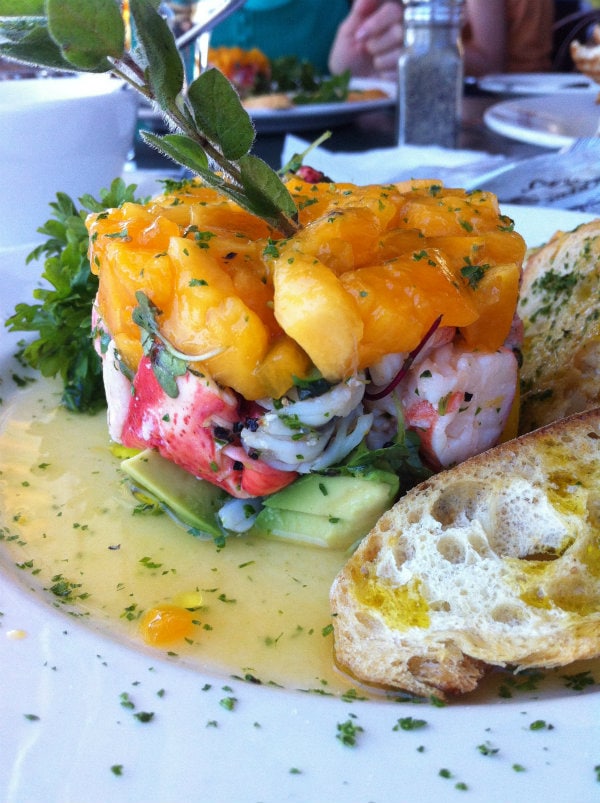 It’s also worth mentioning that we stopped in at Local 186 and had some fabulous mussels, cheese/bacon jam and buffalo fries with blue cheese, along with some adult beverages. 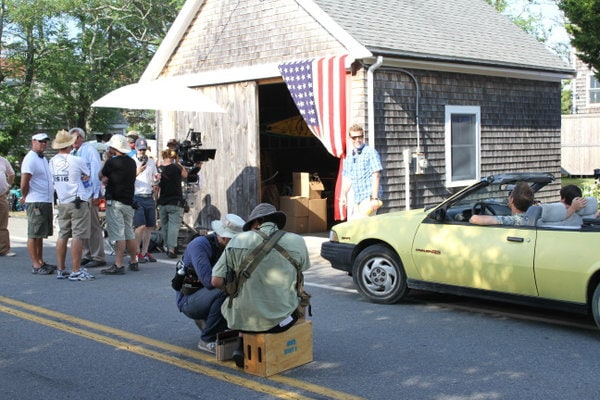 Something really fun about our trip to the South Shore this summer was that there was a movie being filmed on our street and on the beach.  The movie will come out next summer and is called, “The Way, Way Back.”  Stars include: Steve Carell, Sam Rockwell, Amanda Peet, Allison Janney, Maya Rudolph, Toni Collette and AnaSophia Robb.

My husband was walking down the street one day and the production crew grabbed him and asked him if he’d like to be an extra.  He agreed- so he’ll be playing the part of “guy carrying beach chair down the street,” should you ever see the movie! 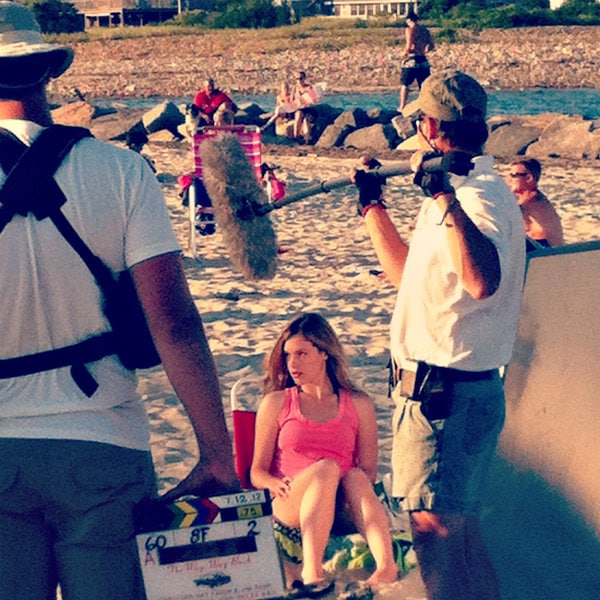 Here is some of the action on the beach.  It’s funny- the actress had to pretend like none of these production people were there… like she didn’t see that big, fuzzy microphone above her head! 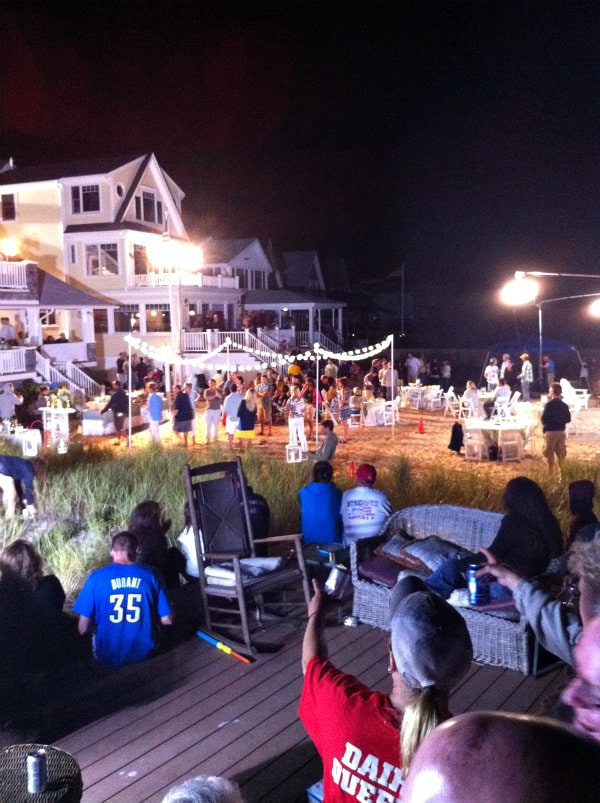 And this is one of the scenes they filmed at night behind a couple of the beach houses.  It was cool to see how they did everything- it’s an enormous undertaking to film even just one seemingly simple scene!  We watched this scene- an evening beach party scene.  It was about a 4 minute scene and it took a couple of hours to shoot with rehearsals and a zillion takes.  I can’t wait to see the movie next summer! 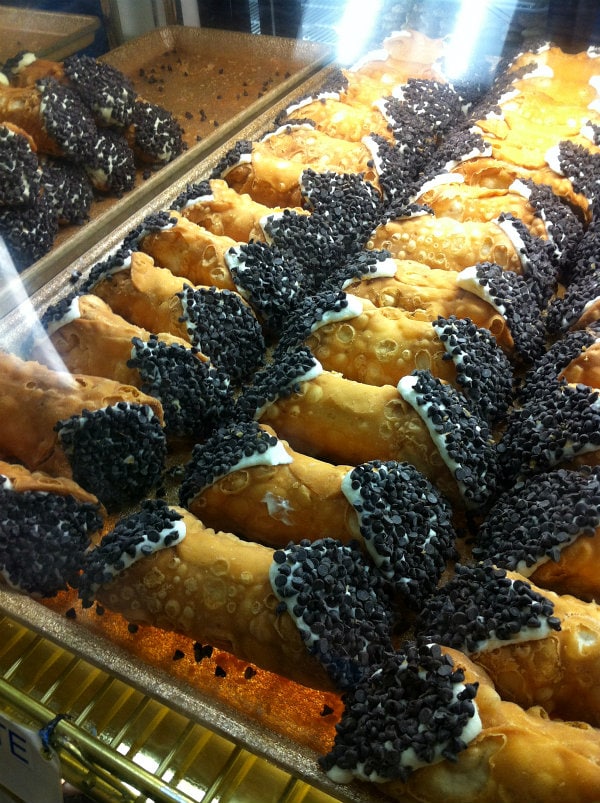 We wandered into downtown Boston one night for some Italian food in the North End and Chocolate Chip Cannoli at Mike’s Pastry.  Always excellent. 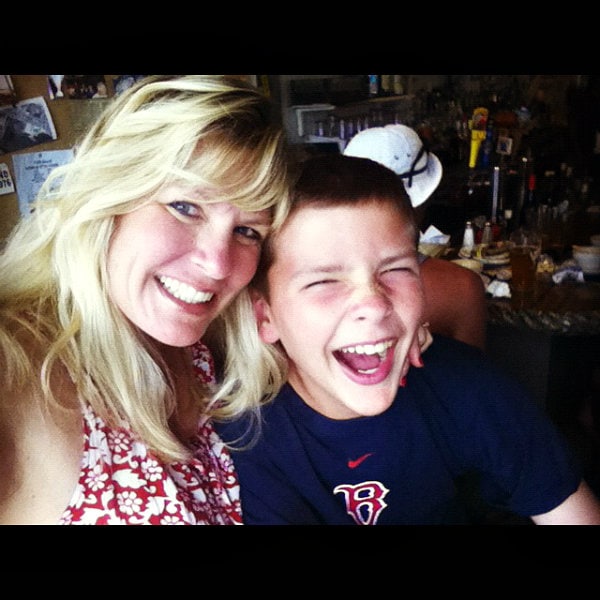 And this is my favorite candid of me and my RecipeBoy.  We sure had fun on our trip!

One last post coming soon…. the loooooong drive back from Boston to San Diego… and a few fun stops we made along the way!  HERE’S a link to the other Cross Country Road Trip 2012 posts I wrote, in case you missed them and you’d like to see where we traveled.