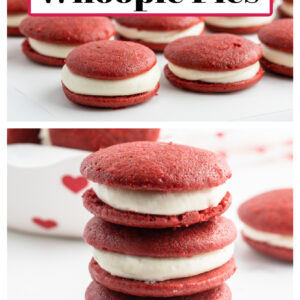 Red Velvet Whoopie Pies are a delicious treat! Much like traditional Whoopie Pies, these cakey confections are filled with a delicious cream cheese filling. They’re red velvet cakes instead of chocolate. 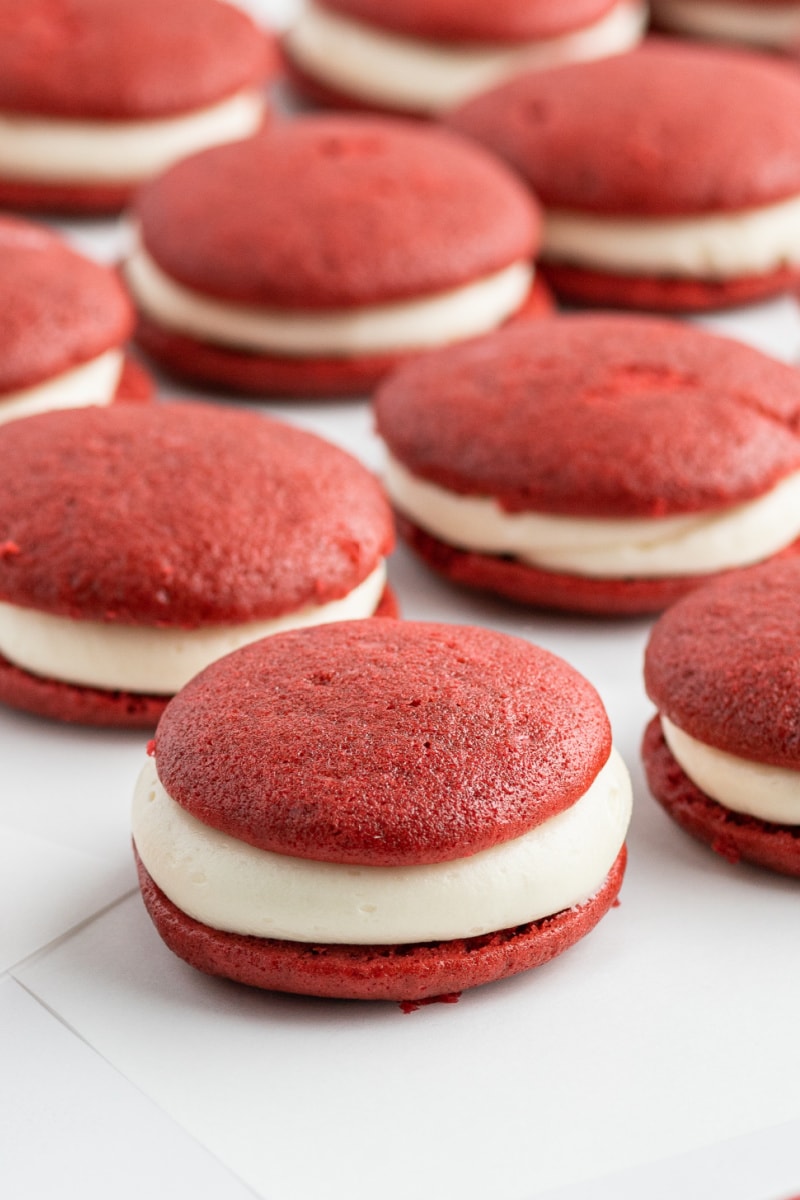 According to Wikipedia:
A whoopie pie is a baked good made of two round mound-shaped pieces of chocolate cake, sometimes pumpkin cake, with a sweet, creamy frosting sandwiched between them. While considered a New England phenomenon and a Pennsylvania Amish tradition, they are increasingly sold throughout the United States. According to food historians, Amish women would bake these (known as hucklebucks at the time) and put them in farmers’ lunchboxes. When farmers would find these treats in their lunch, they would shout “Whoopie!”

Isn’t that a fun story? 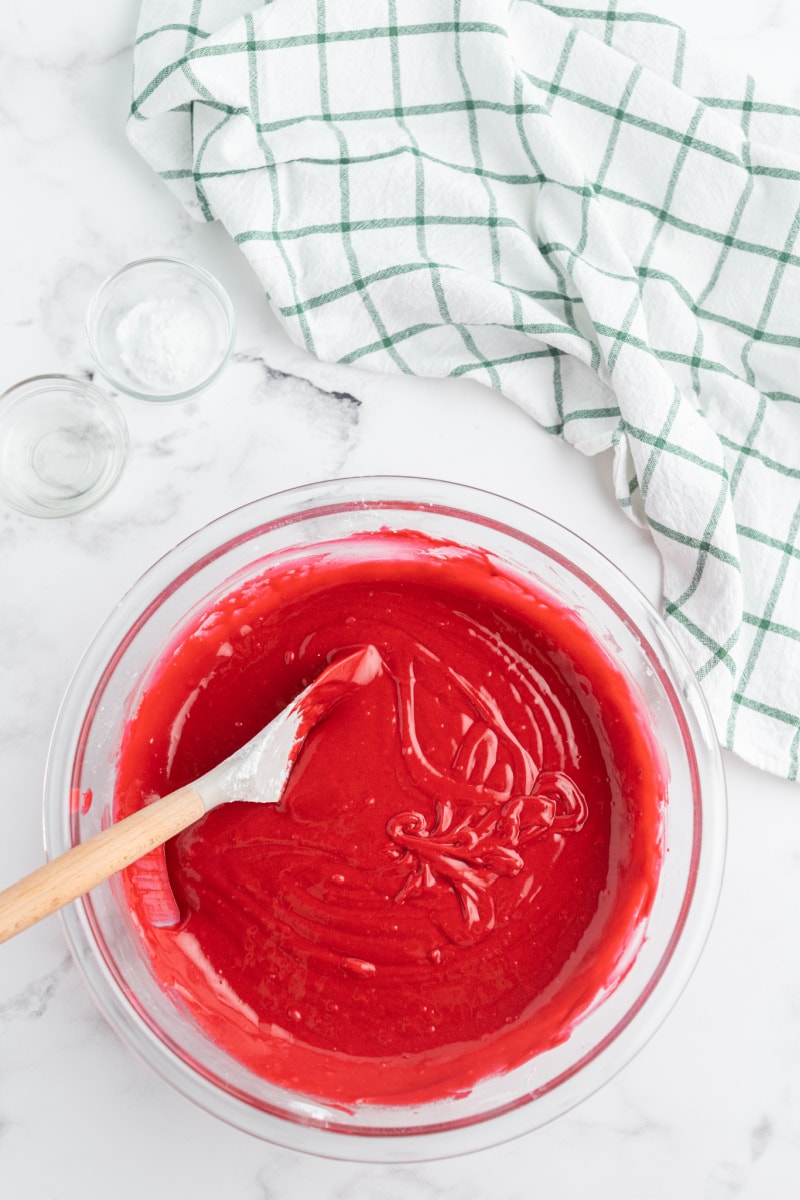 You won’t need any special Whoopie Pie pans to make this recipe, but they are certainly available if you want to buy them! The recipe begins with a red velvet cake batter.

Some folks are weary of red food coloring. I don’t blame those folks. I don’t like to use bottled food coloring in large amounts in my red velvet baked goods. Instead I use red gel (or paste), which is far more concentrated. A little goes a long way and you don’t get that funky food color flavor.  Find it on Amazon, at baking supply stores or at craft stores like Michaels. 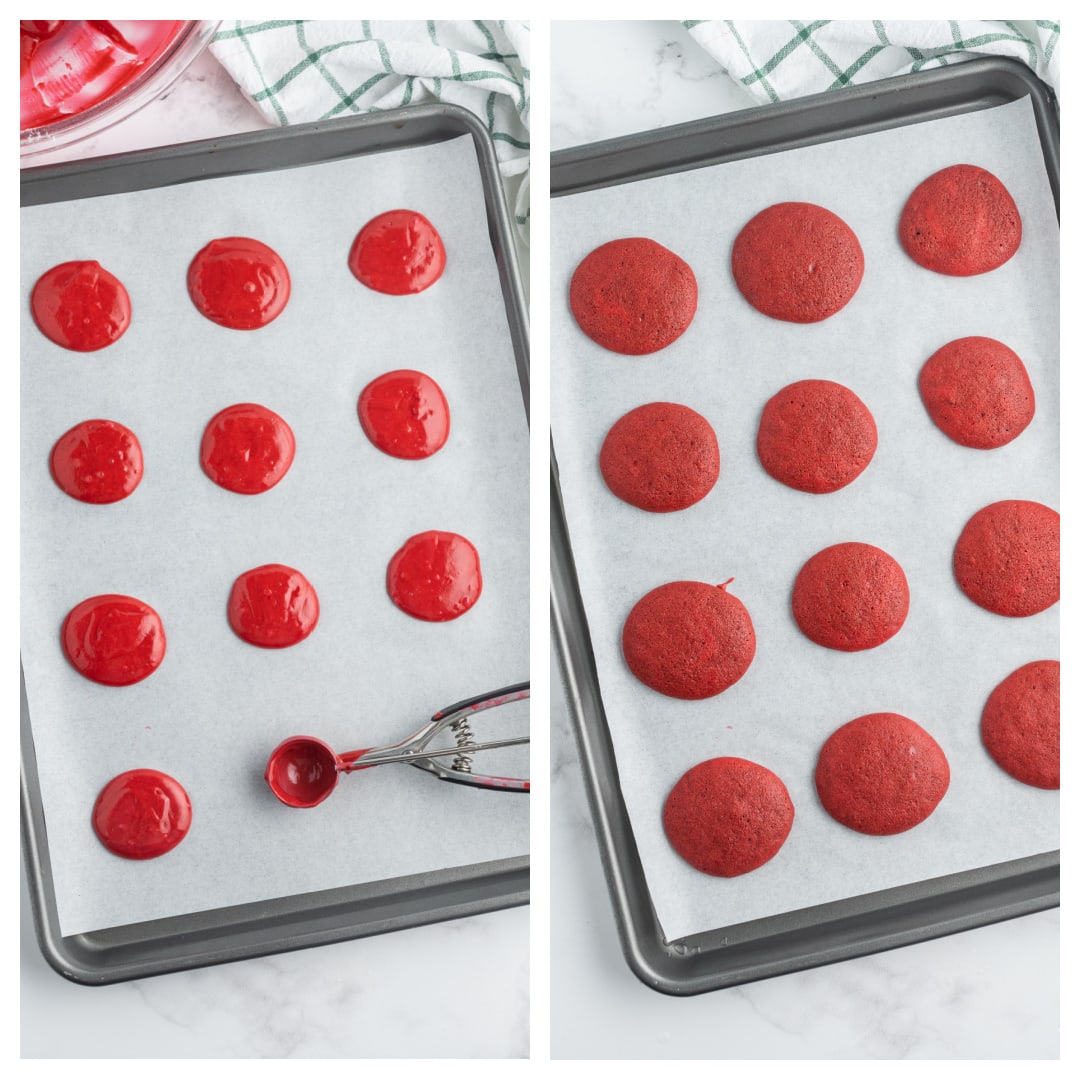 Line baking sheets with parchment paper, and use a cookie scoop for the easiest way to measure evenly sized rounds of Whoopie Pie cakes. Scoop the batter onto the prepared baking sheets and wiggle the batter into circles. They bake pretty evenly, and you’ll match up rounds that are most equal in size. 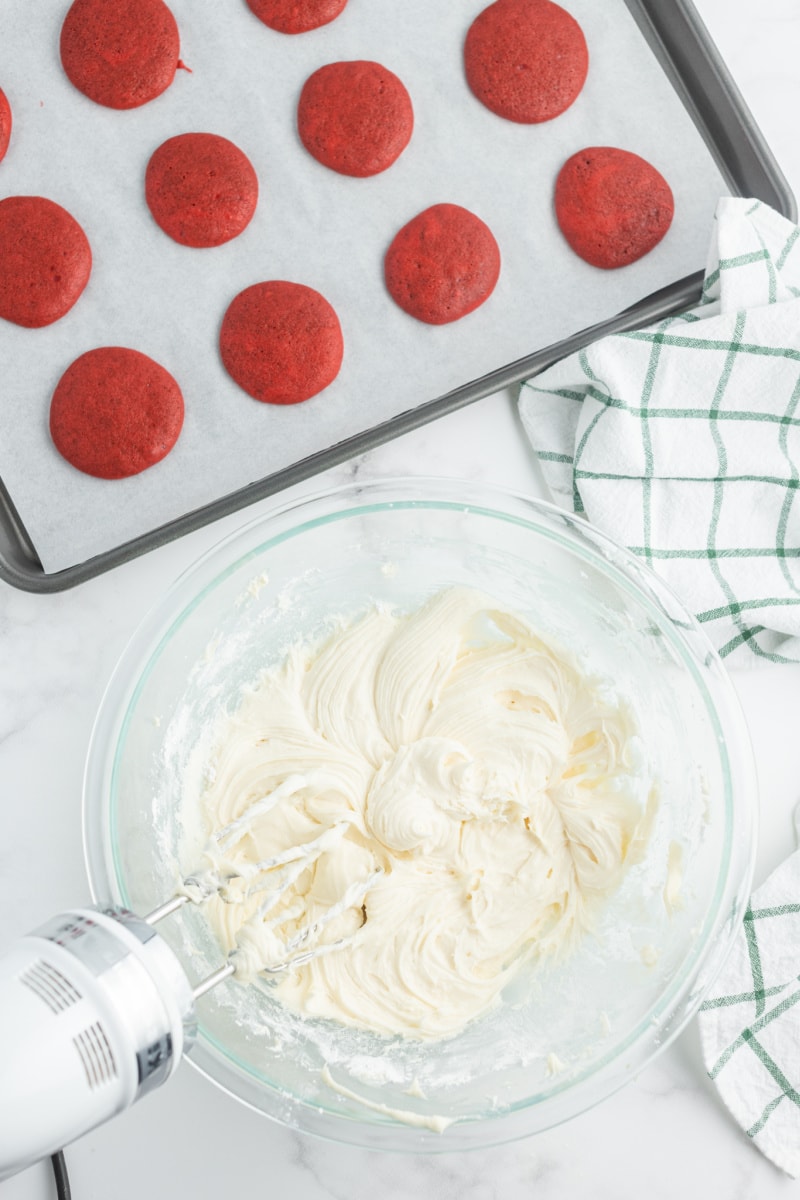 The filling for these Whoopie Pies is amazing. It’s a cream cheese and marshmallow buttercream. Dreamy! 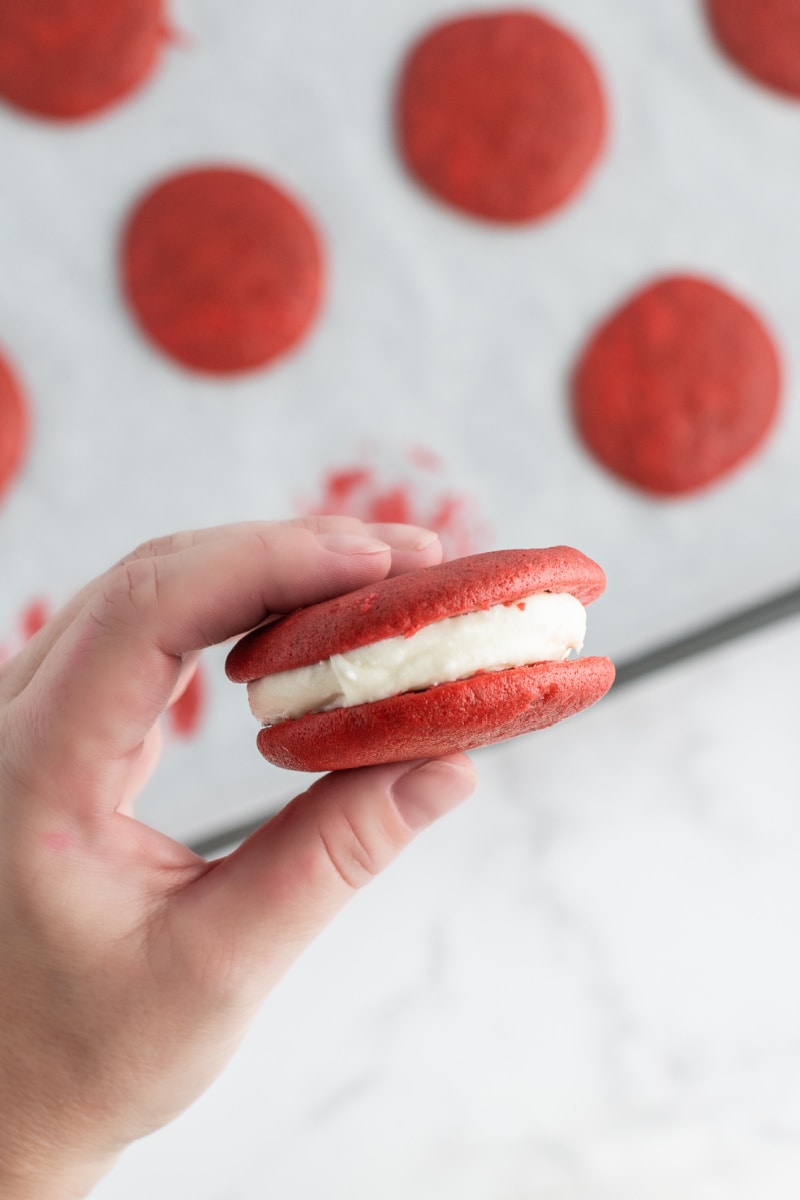 Spread a good amount of the filling on the flat side of a Whoopie Pie cake, and then sandwich two of them together. 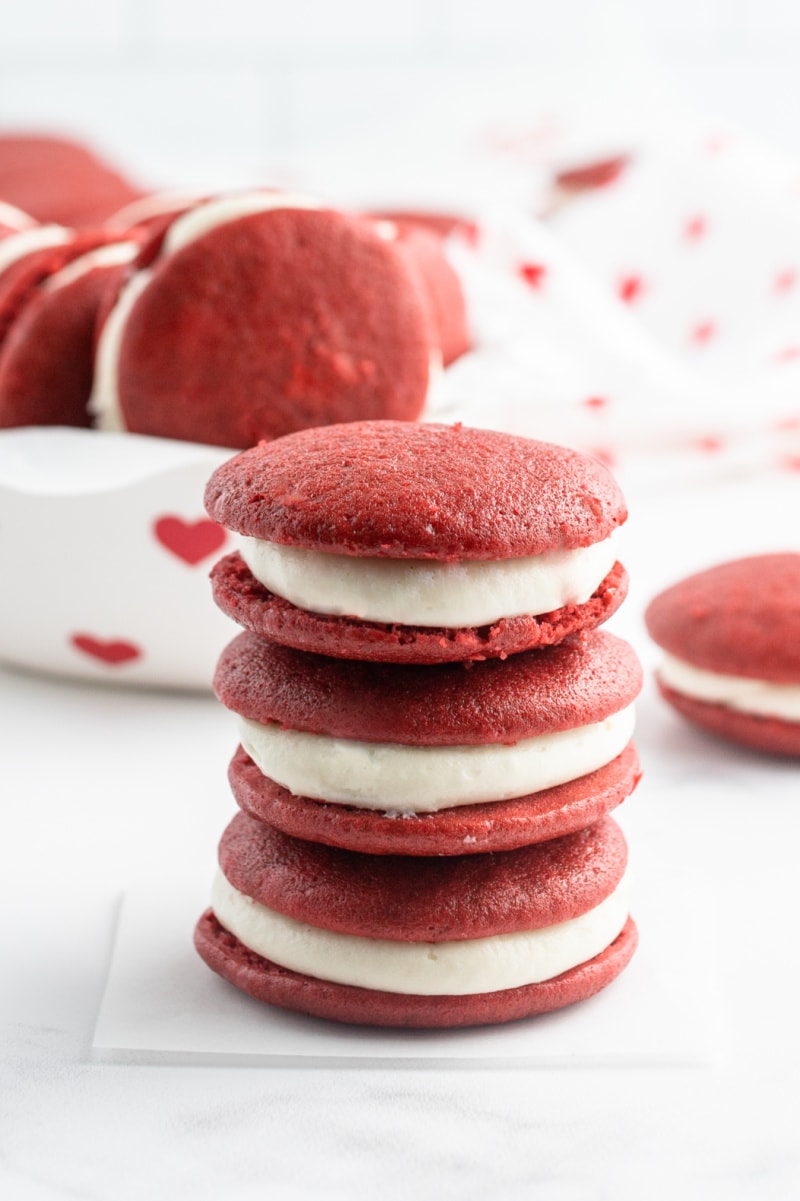 These are a pretty treat to make for Valentine’s Day or Christmas. Or you can even make them just because you like red velvet! 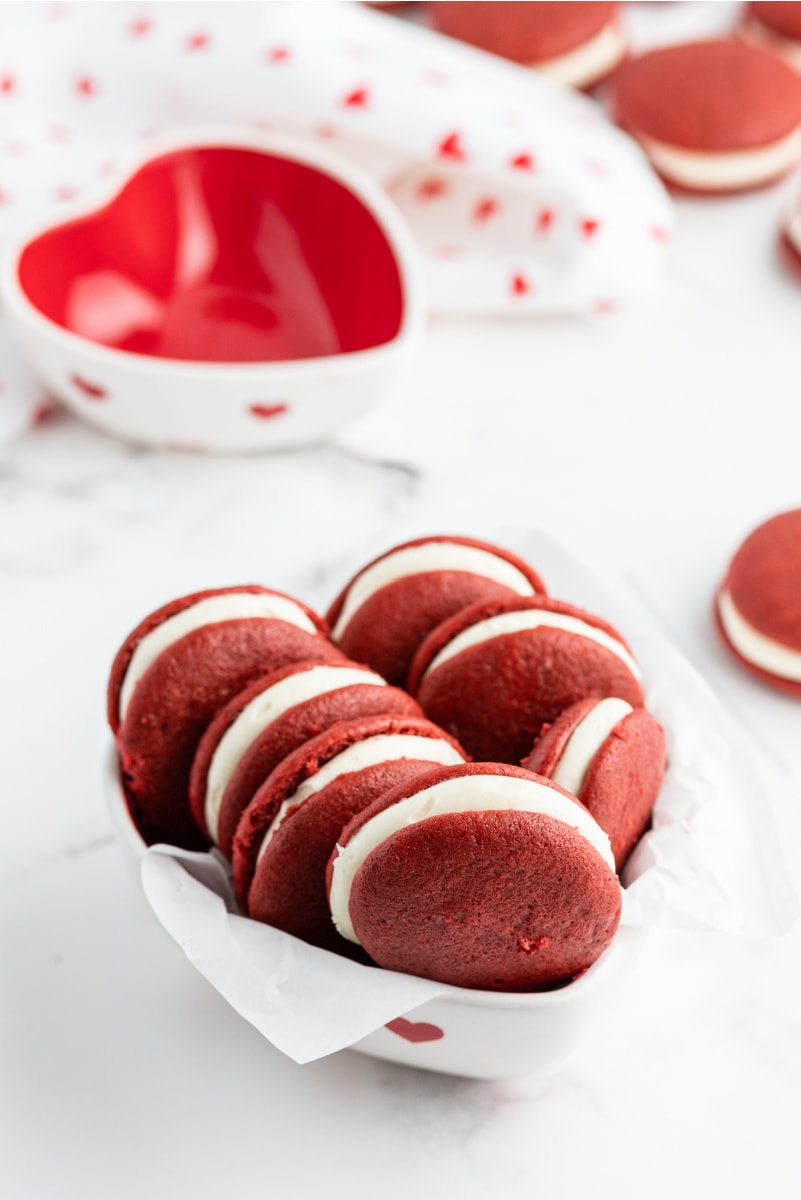 These Red Velvet Whoopie Pies turn out to be a very pretty little dessert. You can make them ahead of time; keep them in a single layer on a tray. Cover them with plastic wrap and refrigerate them for a day or two.  The verdict on these is that they’re delicious.  Let’s be truthful– that cream cheese and marshmallow buttercream frosting is what really makes these worthwhile.  And their festive hue makes them a good choice for a lovely dessert. 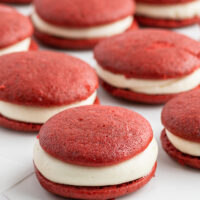