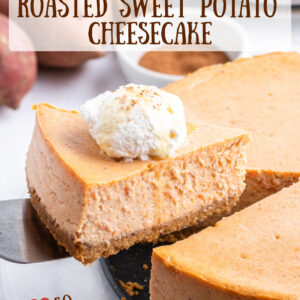 This Roasted Sweet Potato Cheesecake is a wonderful tasting cheesecake that is perfect topped with maple whipped cream. 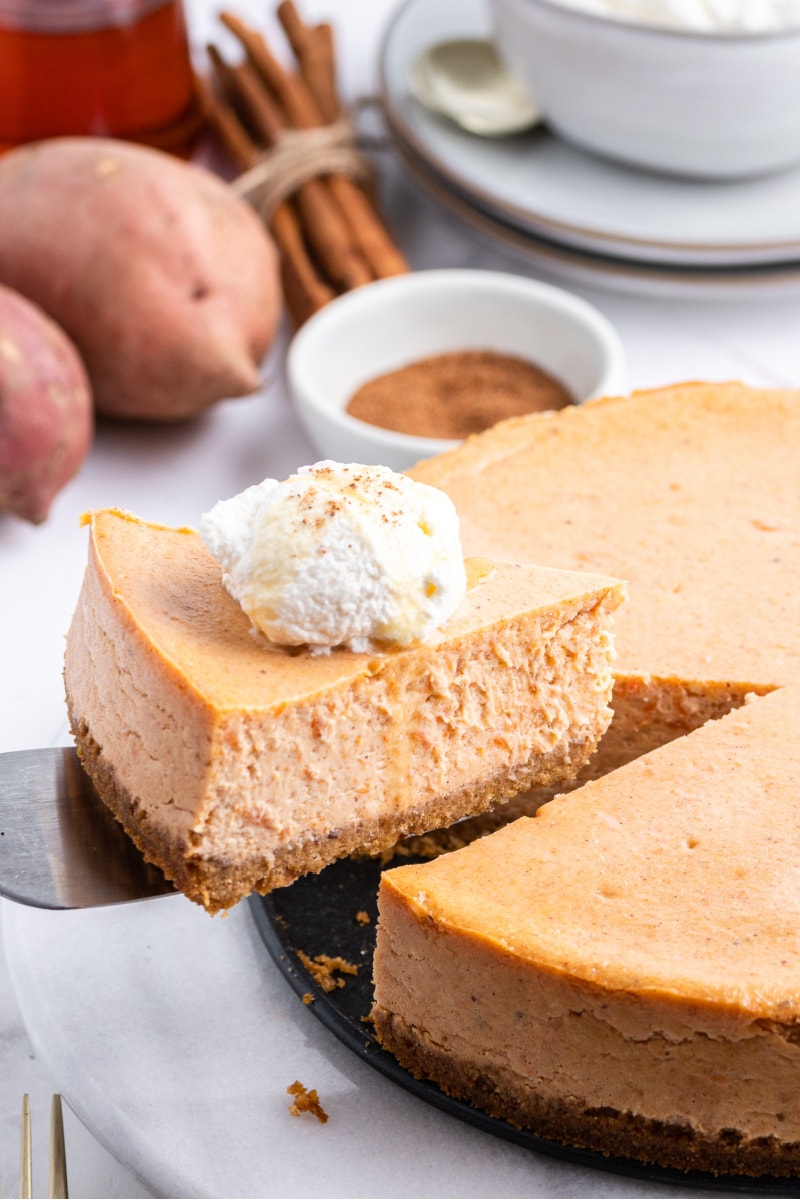 I know it sounds kind of strange. Sweet potato? In a cheesecake? Absolutely. Think about Sweet Potato Pie. No one is complaining about that one. It turns out that roasting sweet potatoes and adding them to cheesecake gives it a fabulous, earthy flavor. This is one of those desserts that will be the surprise hit of the crowd you’re serving it to. It’s so delicious! 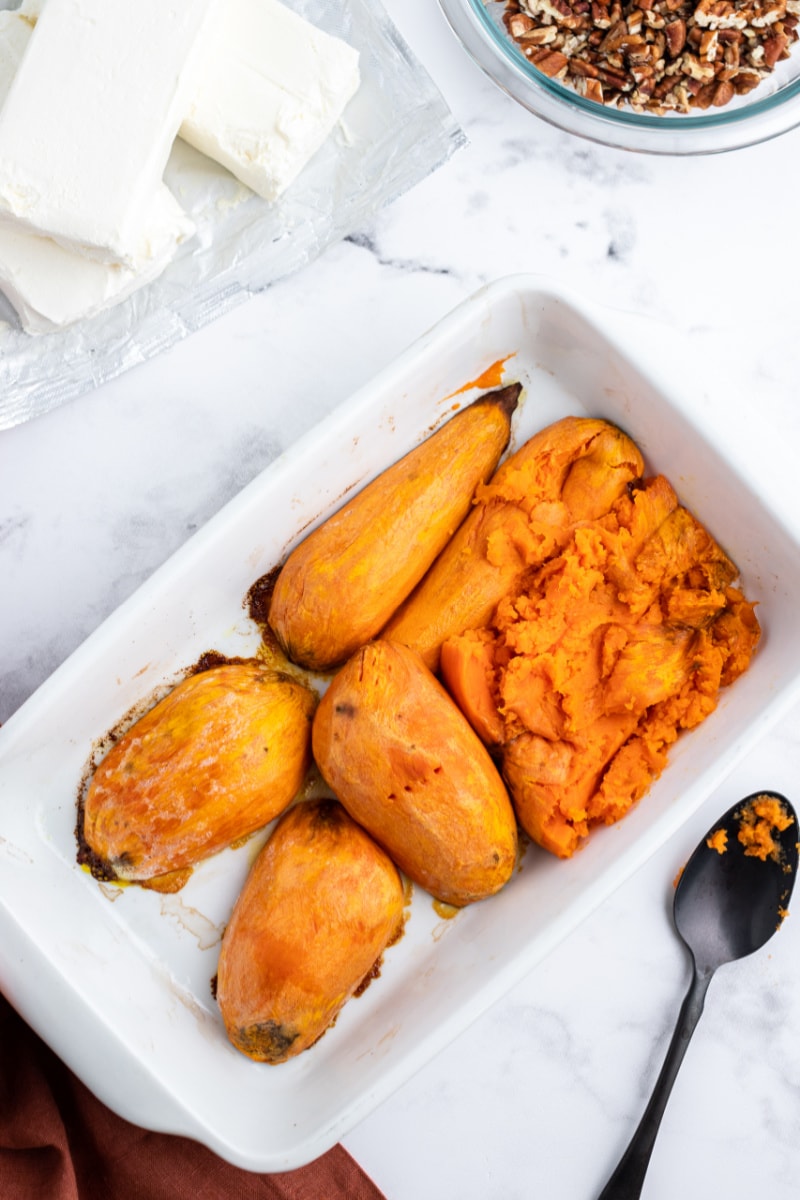 The first step is roasting the sweet potatoes. Peel the sweet potatoes and cut in half lengthwise. Place in a baking pan, brush with melted butter and bake until the potatoes are softened. Cut into chunks and mash with a little lemon juice. You want them to be nice and smooth, so it’s okay to use a food processor if you’d like.

What the difference between sweet potatoes and yams? 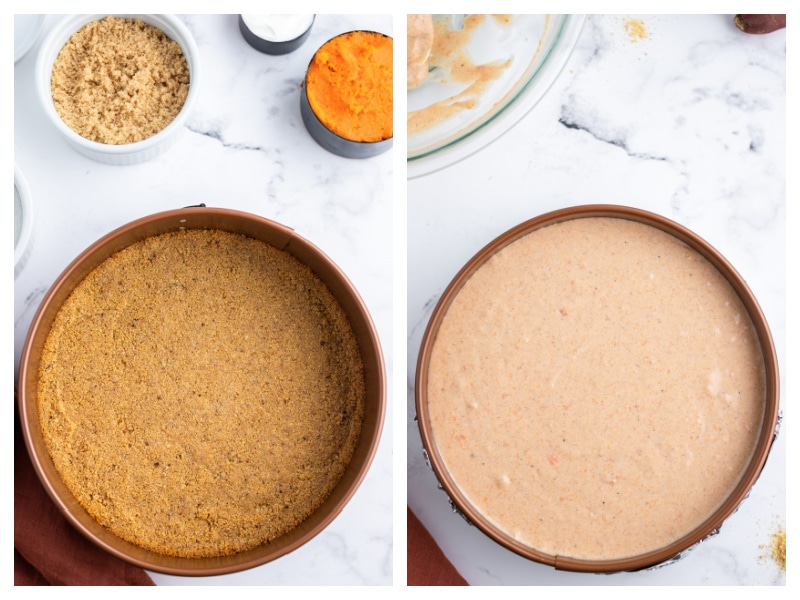 The crust is a mix of pecans, graham cracker crumbs, sugar and melted butter. this will give you a crust to line the bottom of the pan. If you prefer a thicker crust that goes up the sides of the cheesecake, increase all of the crust ingredients a little bit. The crust is baked for about 10 minutes.

The filling is a typical cream cheese cheesecake mixture with 1 cup of the roasted mashed sweet potato mixed in. The filling is poured onto the baked crust. 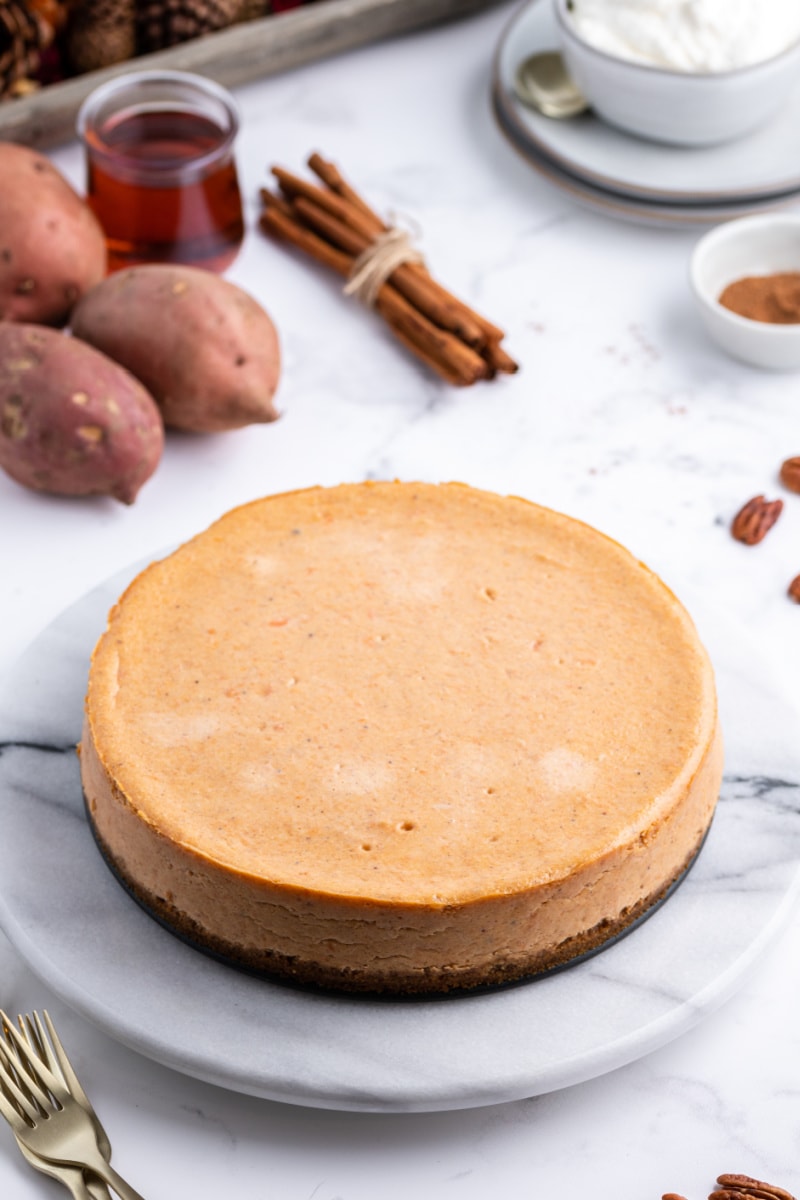 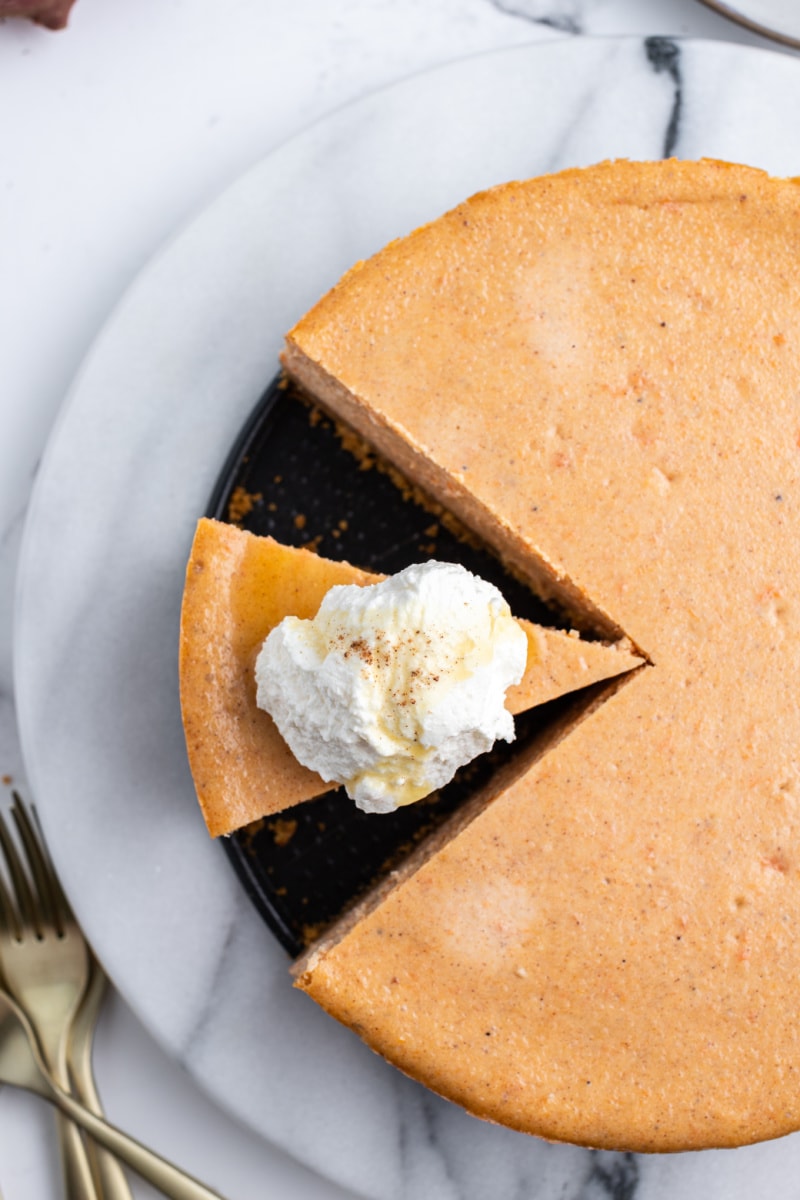 Make the maple whipped cream, when ready to serve. Beat the whipping cream until stiff peaks form. On low speed, beat in the maple syrup just until blended. Cut slices and serve with the whipped cream. 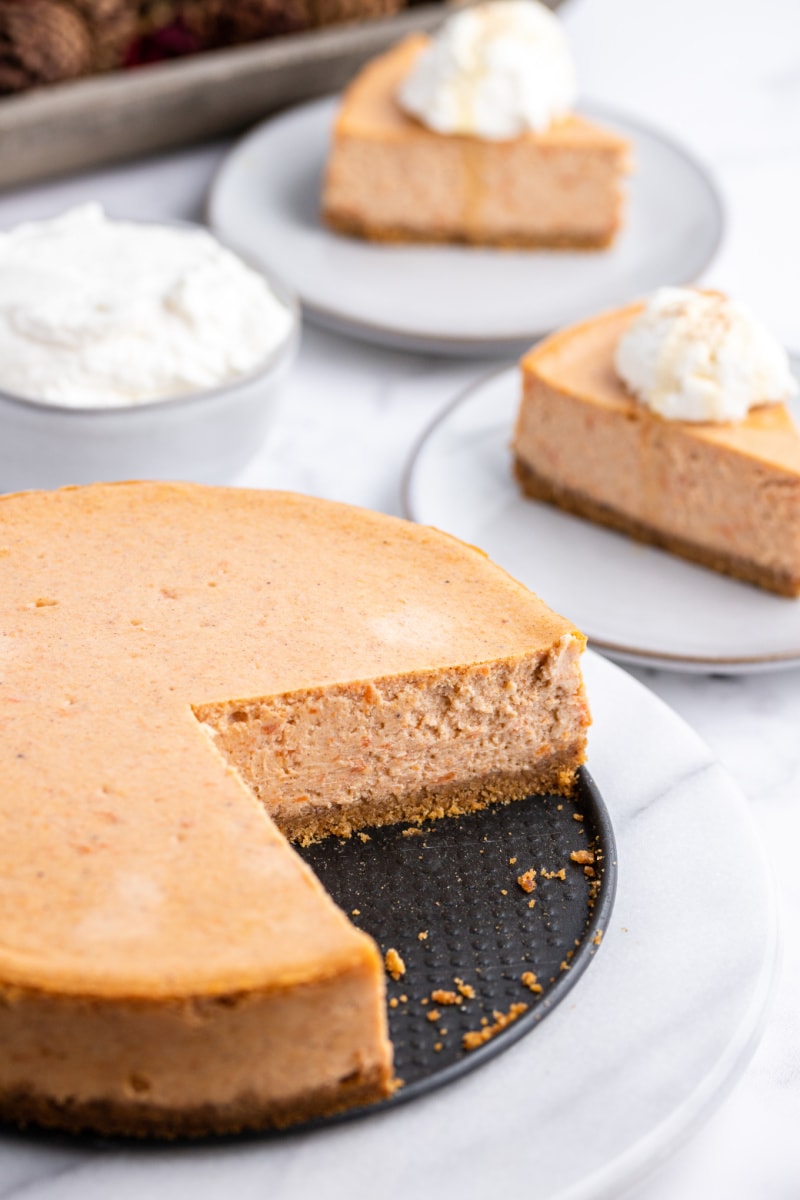 The texture of this cheesecake is super creamy, and the flavor is super rich and delicious. It’s so much more exciting than a traditional cheesecake! 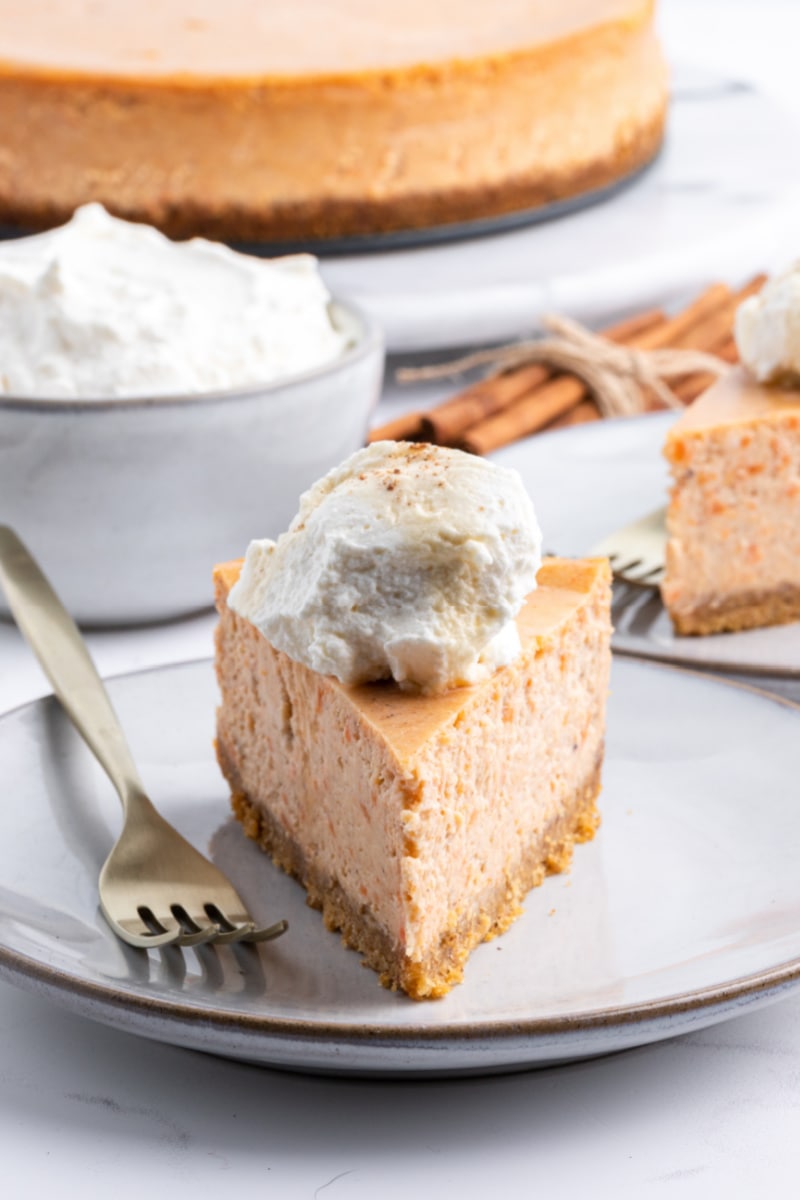 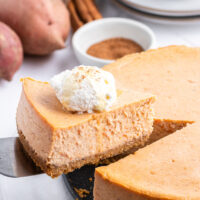 This amazing cheesecake has such great flavor. It's a real crowd pleaser!