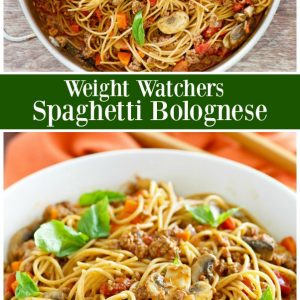 Weight Watchers Spaghetti Bolognese is a lightened up version of the classic bolognese. It’s completely filling and delicious, and it’s perfect for those who are watching their calories. 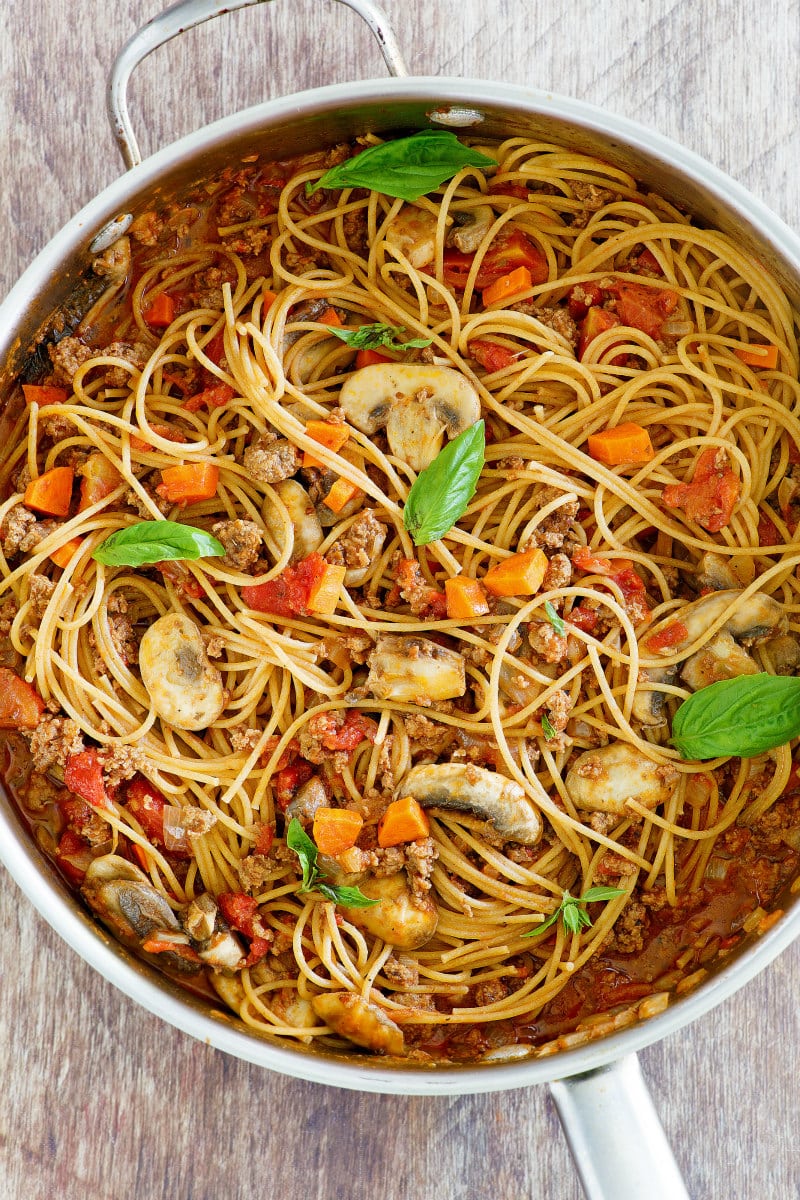 Bolognese sauce is a meat-based sauce originating from Bologna, Italy.  It’s usually served with flat pasta shapes like lasagna, pappardelle or fettuccine.  Bolognese sauce typically has chopped veggies such as carrot, onion and celery.  Wine and milk are also common additions, as are fatty pork, tomatoes and tomato paste.  It’s cooked low and slow to create a thick and rich meat sauce.

Outside of Italy, meat-based sauces are sometimes referred to as Bolognese.  While Spaghetti Bolognese is not something typically seen in Italy, it’s a dish that is quite popular in other parts of the world.  It seems that people have discovered that Bolognese can be enjoyed with thin spaghetti pasta too! 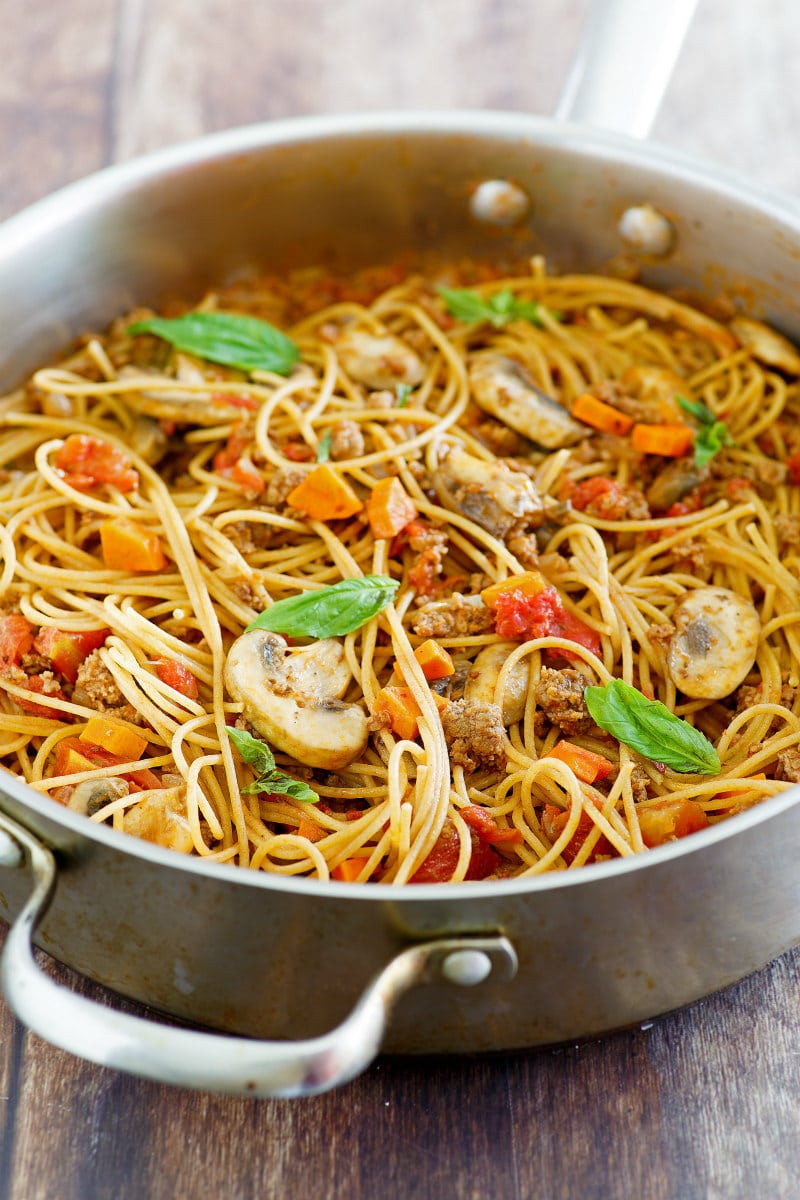 How is this recipe different from the original?  To make this one Weight Watchers friendly, there is no fatty pork added in, and the recipe calls for using lean ground beef only.  There are plenty of vegetables in this- carrot, onion, mushroom and tomatoes- so those add some bulk to the sauce.  A little bit of skim milk is added in, but no wine.  And whole wheat spaghetti is used in place of regular pasta.  There is also a small amount of pasta used in the recipe.

If you’re following the program, Weight Watchers Spaghetti Bolognese will cost you 8 Freestyle SmartPoints per serving. Plan on a little bit of pasta with a good topping of sauce.  It’s filling!  I know 7 points in a high point meal, but you’re going to have a high point meal with any pasta dish. 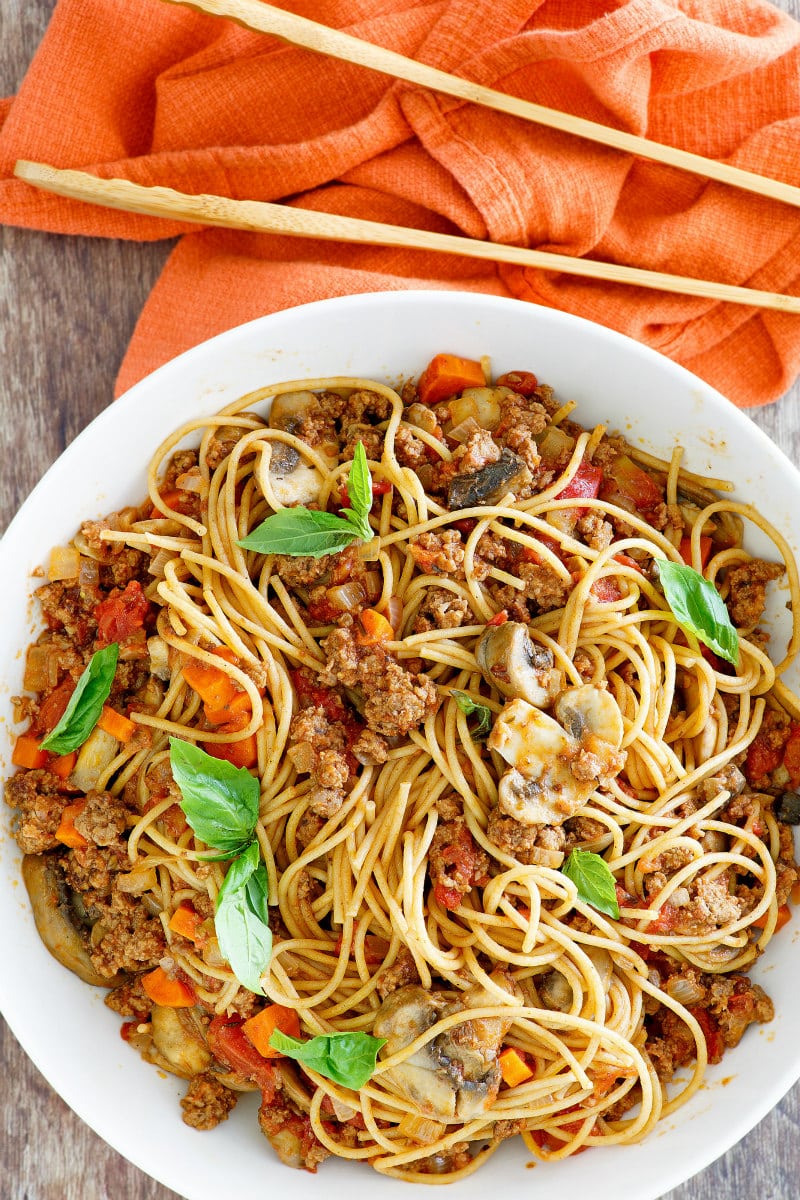 It sounds fancy, but it’s really very easy to make.  The beef is cooked in a nonstick skillet, and then the garlic and onions are added in.  Carrots and mushrooms are added in next and cooked some more.  At this point, you’re going to add a can of diced tomatoes.  If you want a more chunky sauce as you see pictured, just add the tomatoes.  If you like a more saucy sauce, you can add a can of tomato puree instead (or give the diced tomatoes a whir in the blender before adding).

You’ll also add tomato paste, oregano and basil.  This mixture is simmered for about 10 minutes.  Then you’ll add milk and simmer some more until the sauce is thickened.  If you want this sauce to be a little bit more like authentic bolognese sauce, you can add in 1 slice of chopped bacon when you cook the beef.  And add 1/4 cup of white wine to the sauce when you add the milk.  Keep in mind that this will up the WW Freestyle point count to 10.  This recipe can also be made gluten-free by using gluten-free pasta in place of the whole wheat spaghetti. 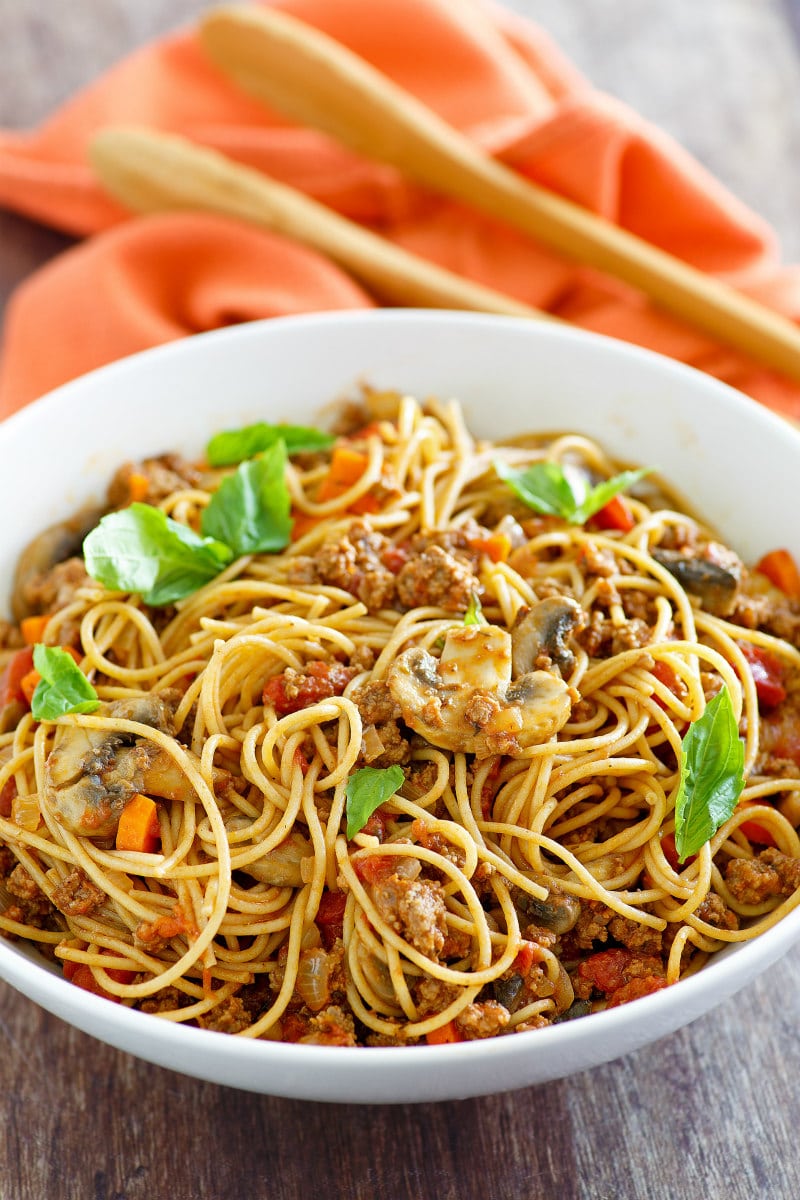 You can eat this Weight Watchers Spaghetti Bolognese if you are not on Weight Watchers.  It’s simply a lighter way to make this classic recipe.  My whole family enjoys it– and they’re not following any sort of diet! 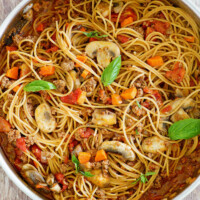 Print Pin Save Saved!
5 from 8 votes

A lightened up version of the classic.
8 8 3