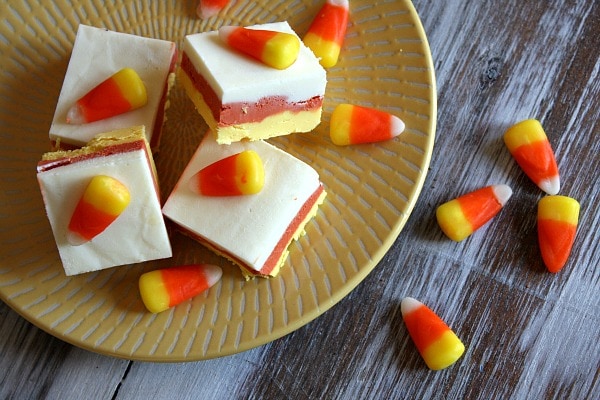 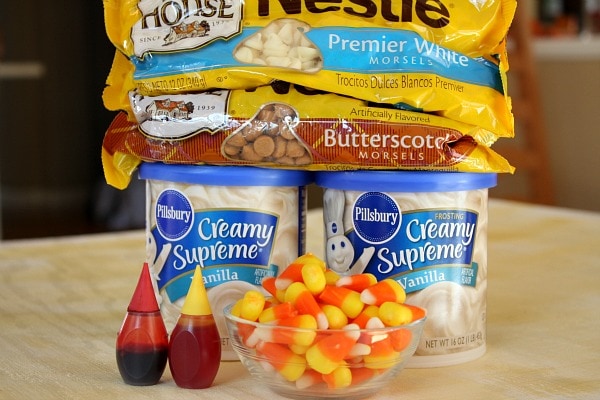 This is one of those easy-ingredients recipes.  Nothing gourmet about this one.  All you need is this stuff.  That’s it.  Here’s how you make it: 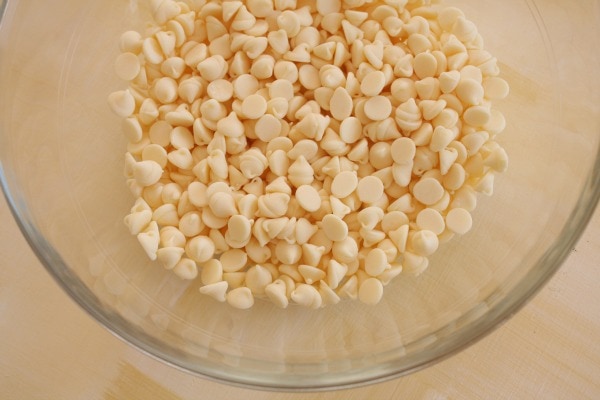 Toss the vanilla chips in a big bowl. 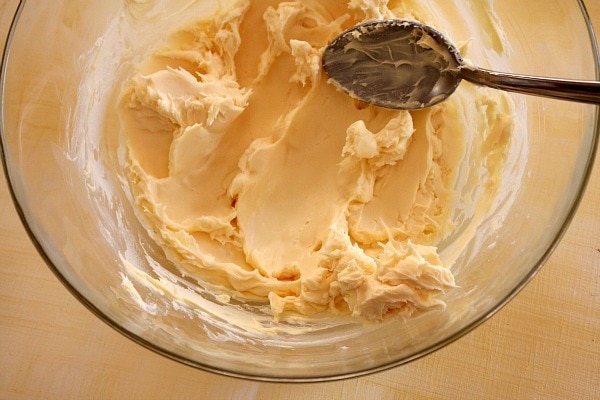 Microwave them until they kind of melt.  I say “kind-of” because if you’ve ever worked with vanilla chips, you’ll know that they don’t really melt like chocolate does.  Just melt them until they can mash together.  Like the photo shows.

Add a can of frosting and mix it up.  The texture will be much better after you do that. 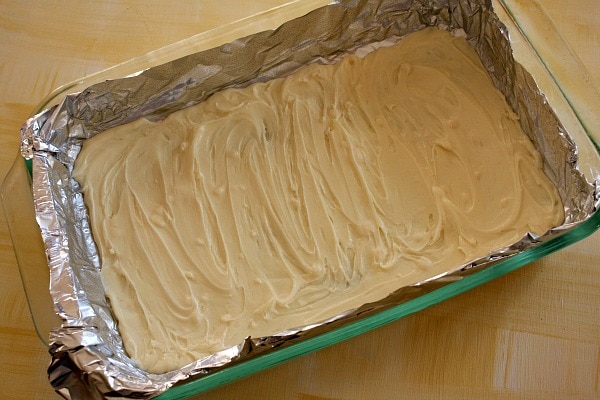 Spread just a third of the vanilla-frosting mixture into the bottom of a greased-foil-lined pan. 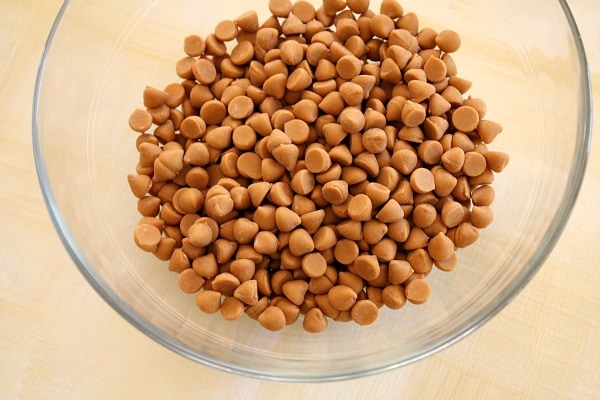 Toss butterscotch chips in another bowl. 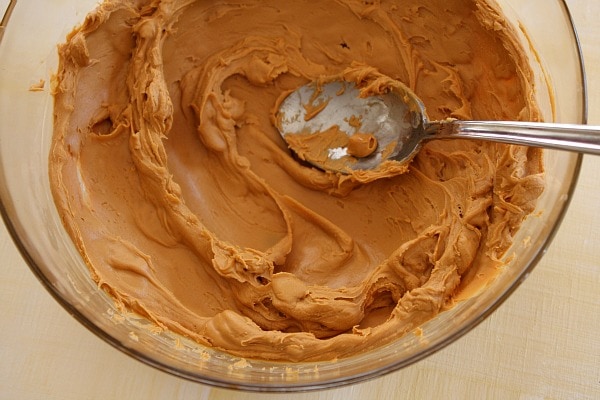 Microwave and do the same thing.  You’ll get similar results with the butterscotch chips in terms of melting.  Just mash them up. 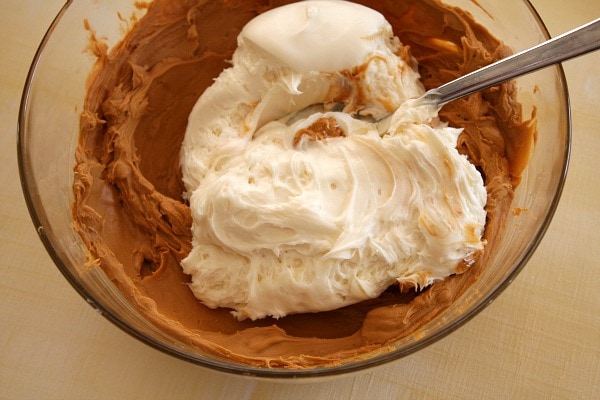 Add a can of frosting and stir. 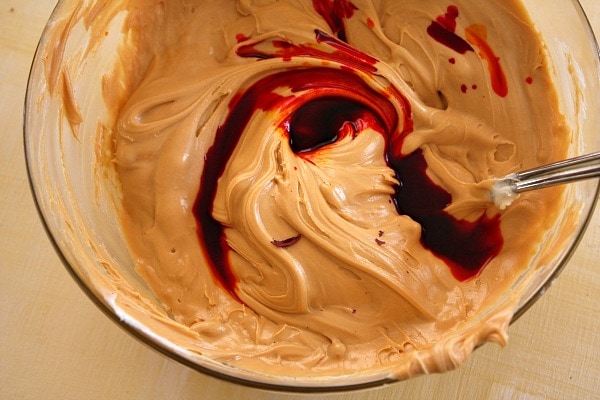 Add yellow and red food coloring, because if you made it past elementary school then you’ll know that red + yellow = orange.  Unless you were talking too much, or didn’t appreciate art, or were never able to make that magical connection.  And just for the record,  blue + yellow = green.  Shall I continue with the lesson… or shall we finish this fudge?  Let’s finish the fudge!  Sorry, I used to be a teacher… 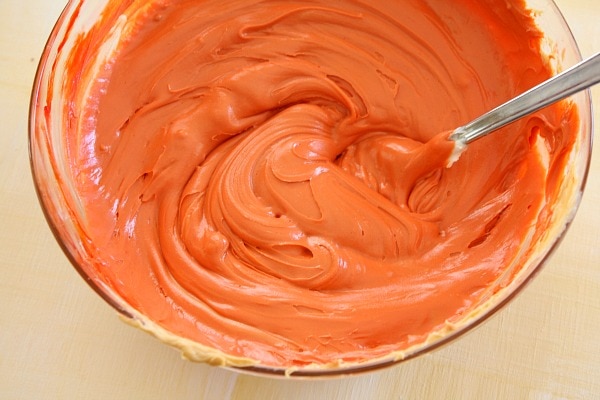 Stir that all up and hopefully you’ll get the color you were looking for.  I might have added a few more drops of red to this, had I not been trying to catch up on Gossip Girl while preparing the fudge.  There are some exciting things going on that there show- my guilty, silly pleasure. 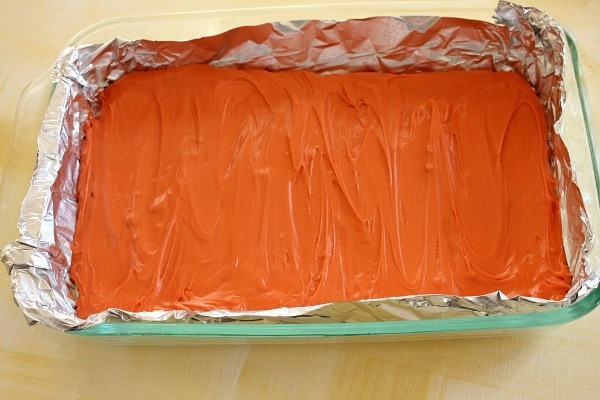 Spread the orange layer on top of the white layer. 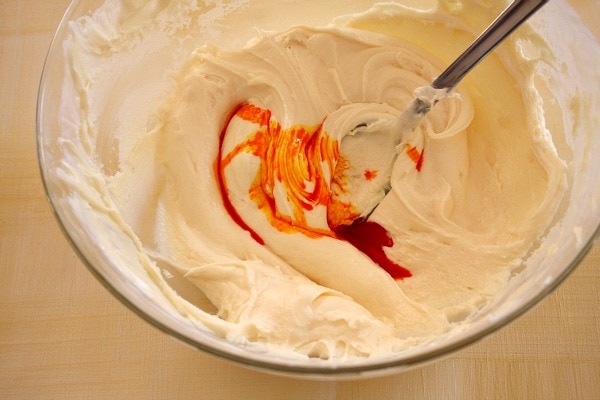 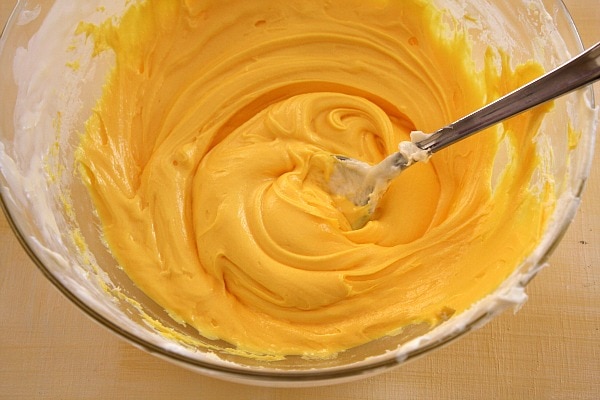 Again, if you don’t like the yellow that you got, add a few drops more.  I liked my yellow. 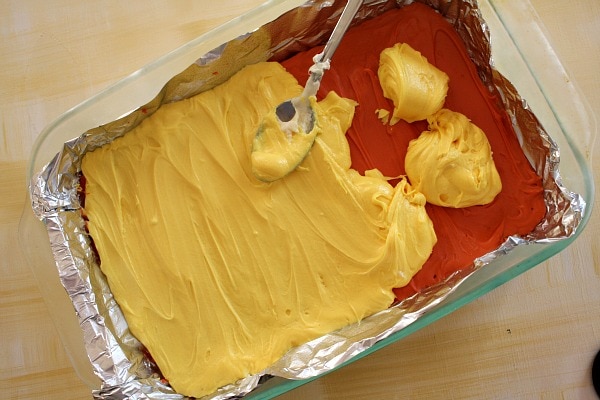 Spread the yellow layer over the orange.  Then refrigerate the whole thing until it is firm (an hour or so). 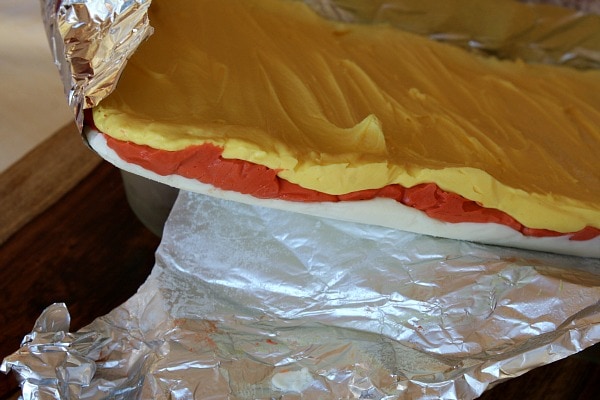 Lift the whole thing out of the pan and carefully turn it over onto a cutting board, peeling away the foil. 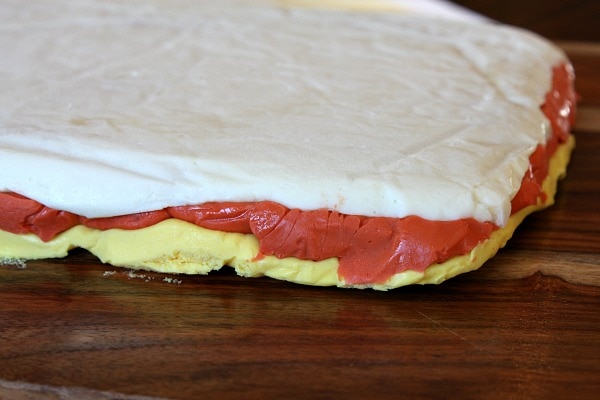 Now the white side will be up.  The edges are kind of messy… and since I’m kind of a freak about bars and brownies and fudge having perfectly neat sides… 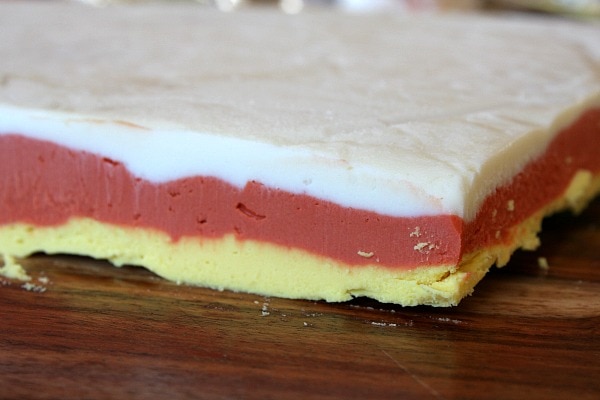 …I went ahead and cut neat sides all the way around (and just tossed the scraps). 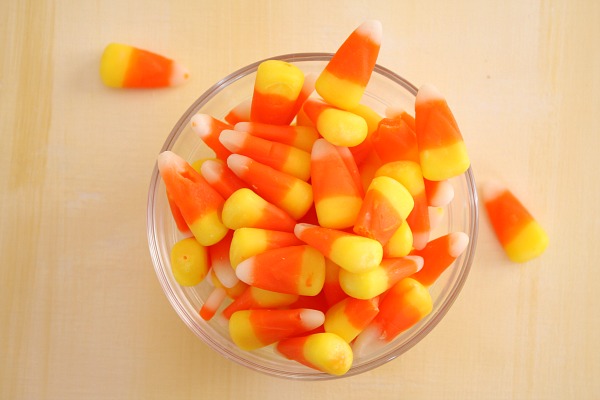 Now get out that beautiful candy corn.  Look through the bag until you find the pieces that are whole and not cracked or funky or rejects or whatever.  You want the perfect ones. 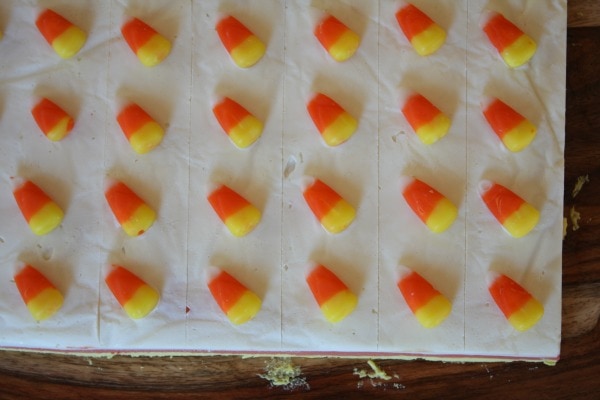 Place the candy corn in even rows on top of your fudge.  All nice and pretty and obsessively straight and perfect like this. 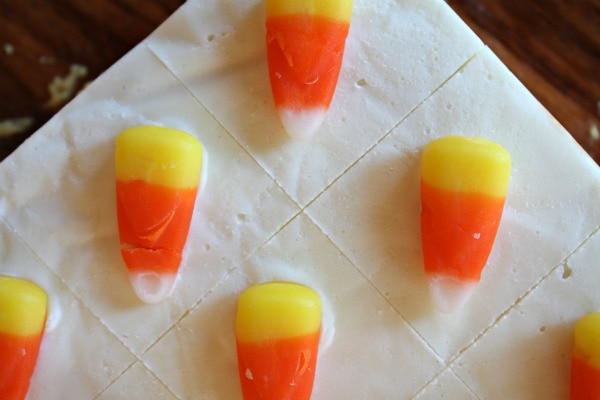 Oh My.  I see a imperfect candy corn on my fudge.  What the heck?! 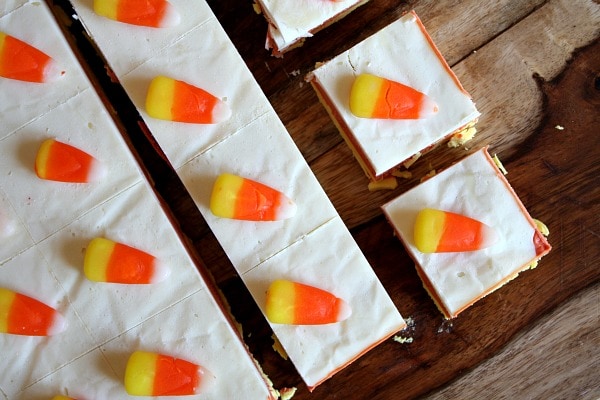 Start cutting on the scored lines.  Have plenty of paper towels handy as you’ll want to wipe your knife after each cut so that you don’t transfer any of the color into the next cut. 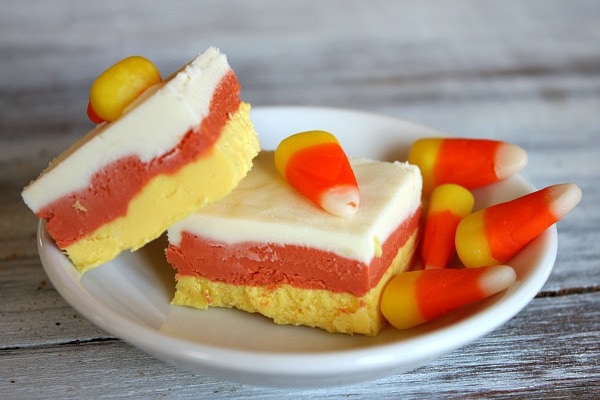 Refrigerate these guys until you’re ready to serve them.  I thought they turned out festive and pretty.  As I said way back when at the beginning of this post, they don’t taste like candy corn.  Since they’re made out of melted chips and frosting, they taste like… chips and frosting.  They’re sweet.  I ate a piece and enjoyed it.  But one piece is enough.  Which means they’ll work out great on a Halloween buffet table.  You likely won’t see anyone downing one right after the other.  And if you do… ew on that guy.

Enjoy your Halloween parties!  Will you be making something festive? 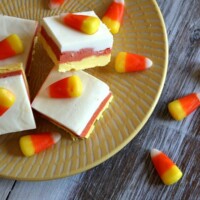 The perfect fudge for Halloween with the classic yellow, orange and white candy corn colors.