Count me in as someone who has always been a bit skeptical on whether or not rosemary has any business being in a dessert recipe. 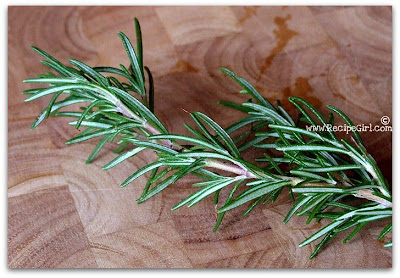 Last year I made a holiday cookie recipe- Rosemary Shortbread Cookies. My husband scoffed and asked me why I was incorporating backyard plants into my cookie recipes. He could never get over the fact that they had such a savory flavor and thus declared them ‘inedible.’ My sister, however, was a big fan of these cookies, and she noted that they were the best holiday cookies of the season. Me? I was on the fence. They were darling Christmas cookies, but I could never decide if I actually enjoyed them as much as my sister.

Almost a year later…
I wanted a cake for my birthday this year. Not just any old cake… something different. And since no one was around to give me cake, I had to bake my own. This recipe caught my eye: Rosemary- Polenta Pumpkin Spice Cake. Since almost a year has passed since the ‘rosemary in a dessert’ incident, I was ready to give it another shot. In a cake? With pumpkin and spices to cover up all of that rosemary flavor? It had to be good. 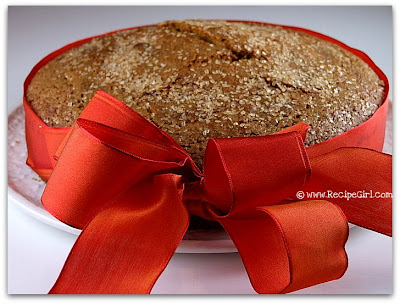 So I made my pretty, rosemary-infused cake with thick sugar crystals sprinkled on top. I even wrapped it up for myself! (Suggestion… if you do this with a little round cake, place a strip of parchment underneath the ribbon so your cake does not impart any oil onto your ribbon.) Live and learn. 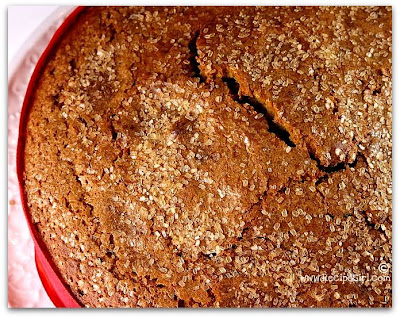 This cake puffed up really tall in the oven, announcing itself to be a proud, celebratory treat. It then settled a bit and a crack was visible on top. I thought the crack added a little character to my non-frosted cake. 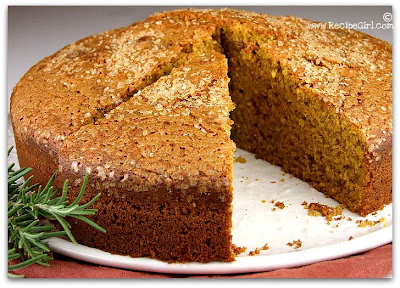 I enjoyed this cake plain, but you certainly could whip up some cinnamon-tainted, freshly whipped cream to accompany your slices. 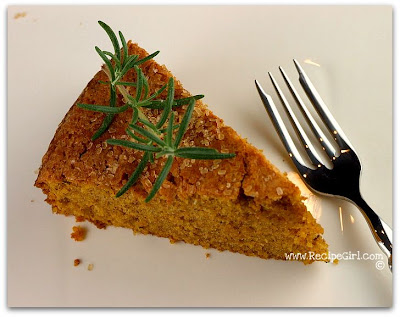 Eat only the rosemary that’s inside the cake. Don’t eat the backyard plant placed on top. It’s just there for decoration. The polenta provides a subtle crunch throughout the cake, and the top of the cake turns out to be sweet and crusty from the addition of raw sugar. 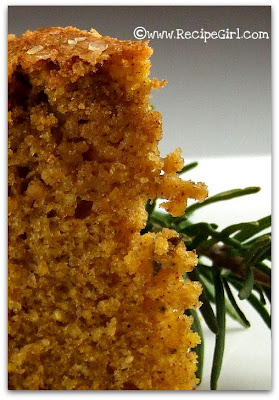 This cake has olive oil in it. I’ve never made a cake with olive oil in it before, but I can tell you that I believe that it made this cake extra moist. It wasn’t dry in the least.

The rosemary? It was great. Really. No kidding. I have to admit that the recipe called for 1/4 cup finely chopped rosemary and I probably only included about 3 Tablespoons instead. I just couldn’t bring myself to include that last Tablespoon for fear of turning this into a plant-tasting birthday cake. If I made it again I’d include the whole 1/4 cup. Ironically, I was actually wishing for a little more rosemary flavor. My husband… he’s a lost cause with the whole ‘rosemary dessert’ thing. I think if I hadn’t told him that it has rosemary in it everything would have been fine and he’d have gobbled it up no problem- but he was wary.

Having a backyard full of rosemary, my husband is all too familiar with the stuff- the sight, the scent, the flavor. He’s onto me. Next time… the rosemary will have to be my little secret… except that those visible little green things might be tough to hide.

This recipe can be found here:  Rosemary- Polenta Spice Cake