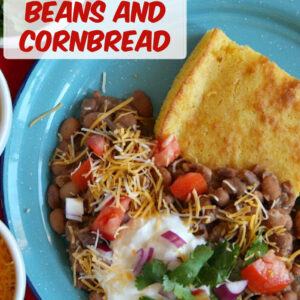 Pioneer Woman’s Beans and Cornbread is a favorite comfort food meal.  Homemade cornbread is smothered with homemade beans and topped with a delicious array of fixings. 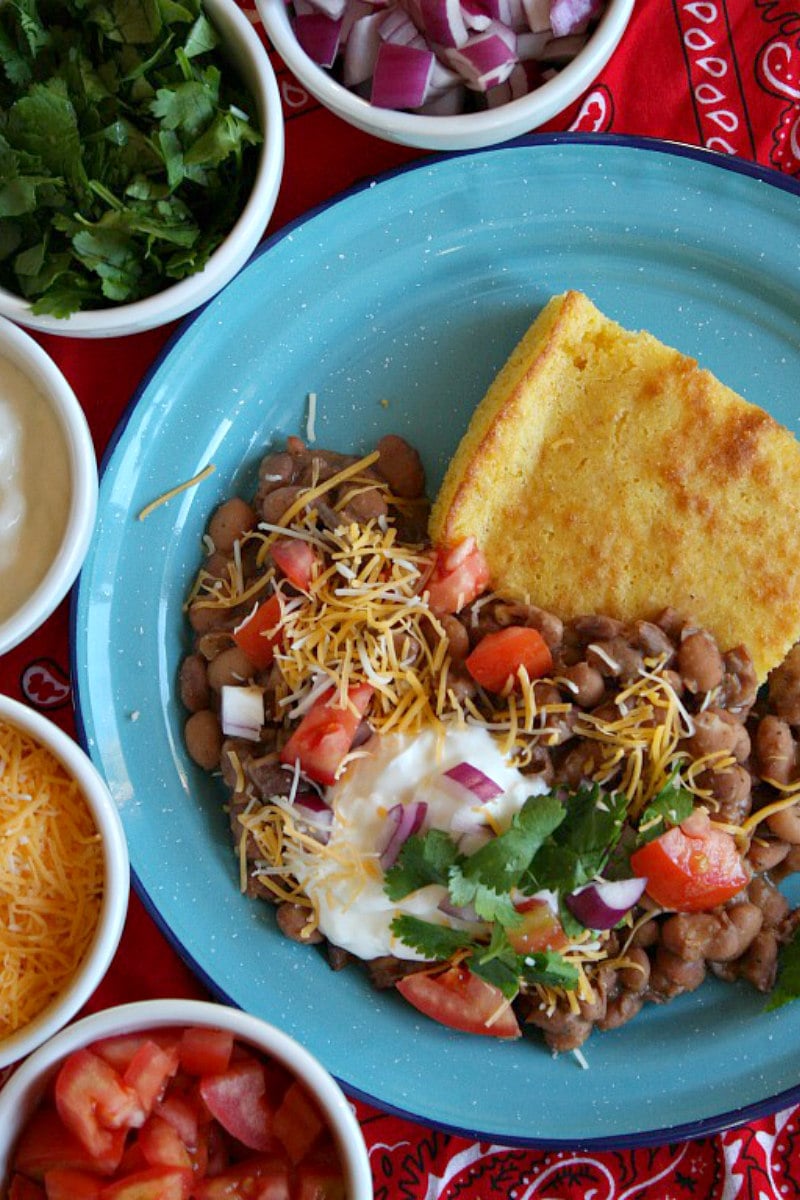 You can’t make one without the other!

It’s true!  Beans and cornbread go together like peanut butter and jelly.  They’re so good when served together.  This recipe from the Pioneer Woman (Ree Drummond) comes from her first book:  The Pioneer Woman Cooks.  I love that she included this one in her book because this is exactly what I imagine her family eating on her ranch in Oklahoma!

The majority of the recipes in The Pioneer Woman Cooks cookbook are easy-to-make, pure comfort food- perfect for filling the tummies of hard working ranchers. I let my son choose the recipe he’d like me to make and share from this book. He chose Beans and Cornbread! 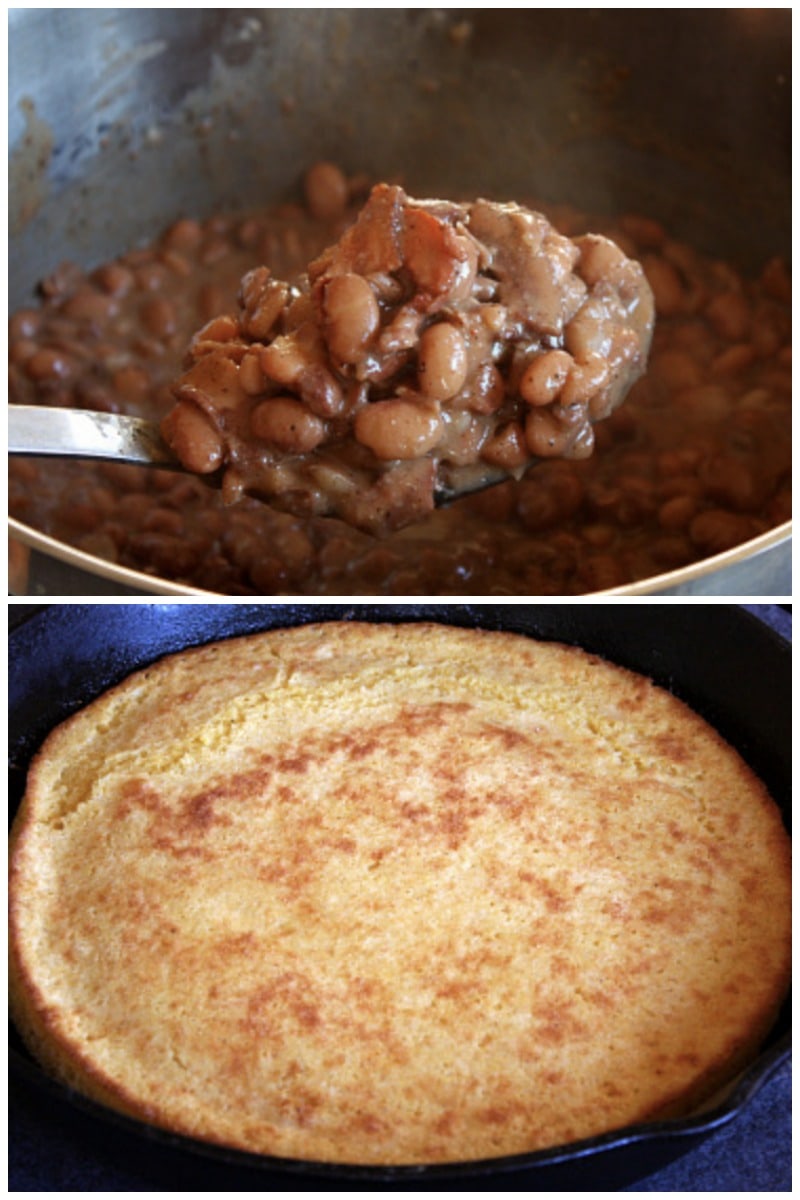 How to make Pioneer Woman’s Beans and Cornbread:

This recipe begins by rinsing dried pinto beans really well. One thing that’s important about rinsing beans is picking through them to make sure there aren’t any sticks or small stones mixed in (it happens!) Just remove them if you see any.  The beans are put into a big pot with chopped bacon or ham, and then water is added to the pot until it comes up and over the beans.  The beans are brought to a rolling boil, then turned down to a simmer and let cook for three hours with the lid on top.

When the beans are almost done, the cornbread needs to be made.  It’s a pretty typical cornbread recipe.  One thing to note is that it’s not a sweet cornbread recipe.  It’s considered a classic Texas Cornbread… grainy in texture, flatter and very crispy on the outside.  And it’s the perfect sort of cornbread for pairing with beans.

Back to the beans: when they’re tender, you’ll add salt, pepper, chili and garlic powder, and maybe a little oregano and cayenne too.  That’s it- the beans are done. 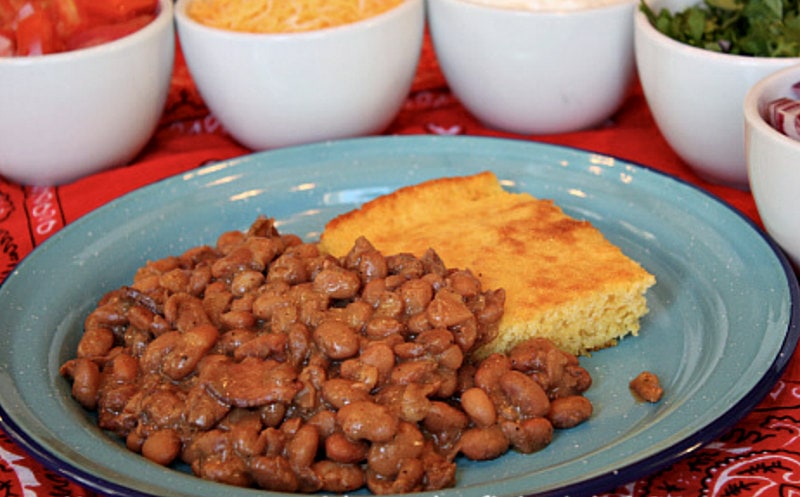 What do you serve with beans and cornbread?

Plate your beans and cornbread side by side, or put a big old ladle-full of of beans right on top of your cornbread.  Whatever you prefer!  Top with freshly chopped cilantro, shredded cheese, chopped red onion, sour cream and/or fresh tomato.  The best thing about serving beans and cornbread for dinner is that you can set out the fixings (just like tacos) and let everyone add what they’d like. 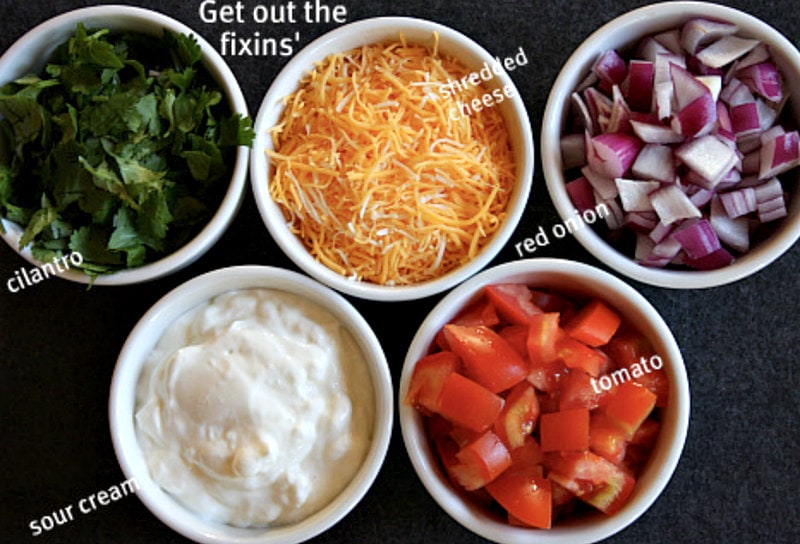 Beans and cornbread has its origins in the south- specifically in the Appalachian mountains.  Soup beans were served with cornbread and greens. In rural areas (where food was scarce in the winter), dried beans were a staple food. Sometimes people crumbled their cornbread into their beans and preferred to eat it that way.

Fun fact from Wikipedia: “Beans and Cornbread” was also the traditional meal served to NASA launch crews following a successful space shuttle launch. The tradition was begun on April 12, 1981, by NASA test director Norm Carlson and was continued after every successful launch. 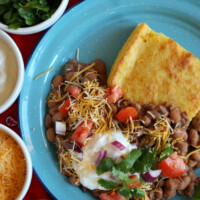 Beans served over cornbread topped with all of the fixings.