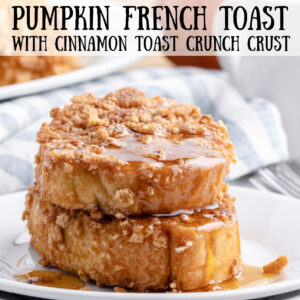 This Pumpkin French Toast is a really nice breakfast to make in the fall for a special weekend morning.  The bread develops a wonderful, crunchy crust, and it’s wonderful served with warm maple syrup. 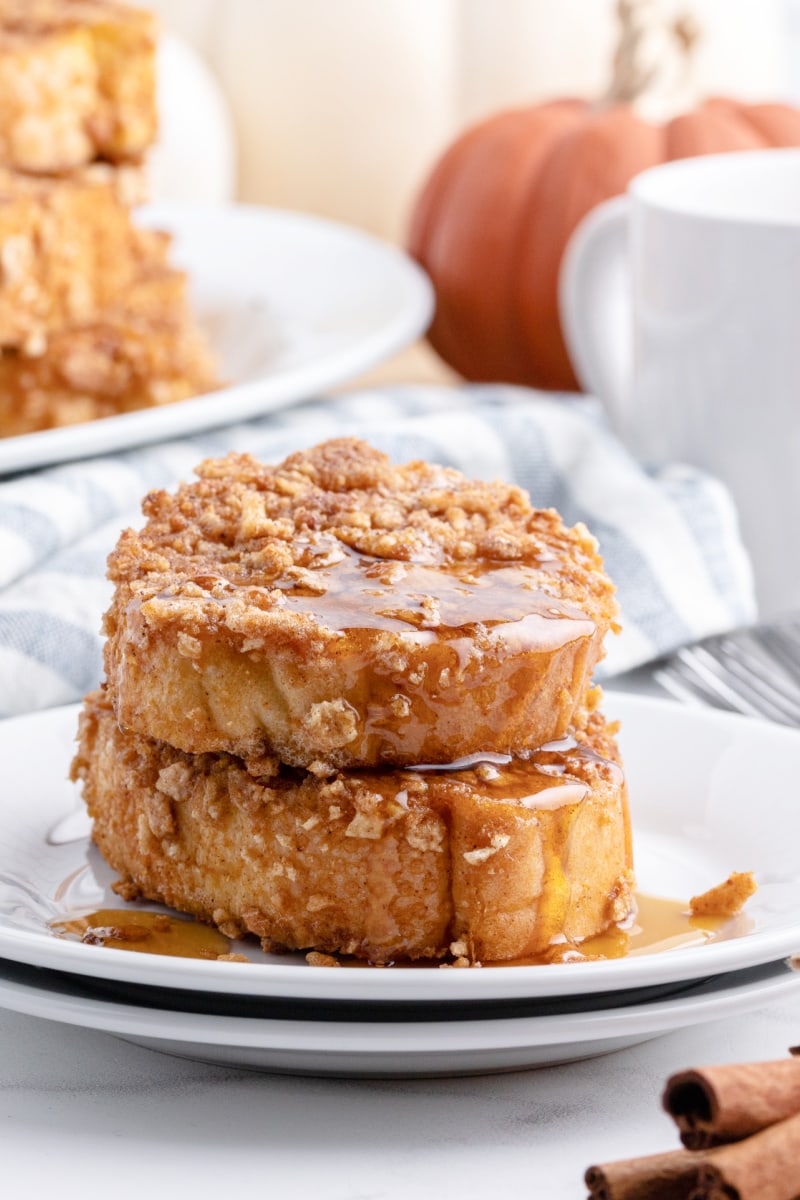 This recipe for Pumpkin French Toast has always been a website favorite.  If you’re a fan of Cinnamon Toast Crunch Cereal, you’ll be happy to know that this cereal is what provides the crunchy crust for the French Toast.  And… that gives you a reason to buy a box of that addicting cereal to keep in your pantry! 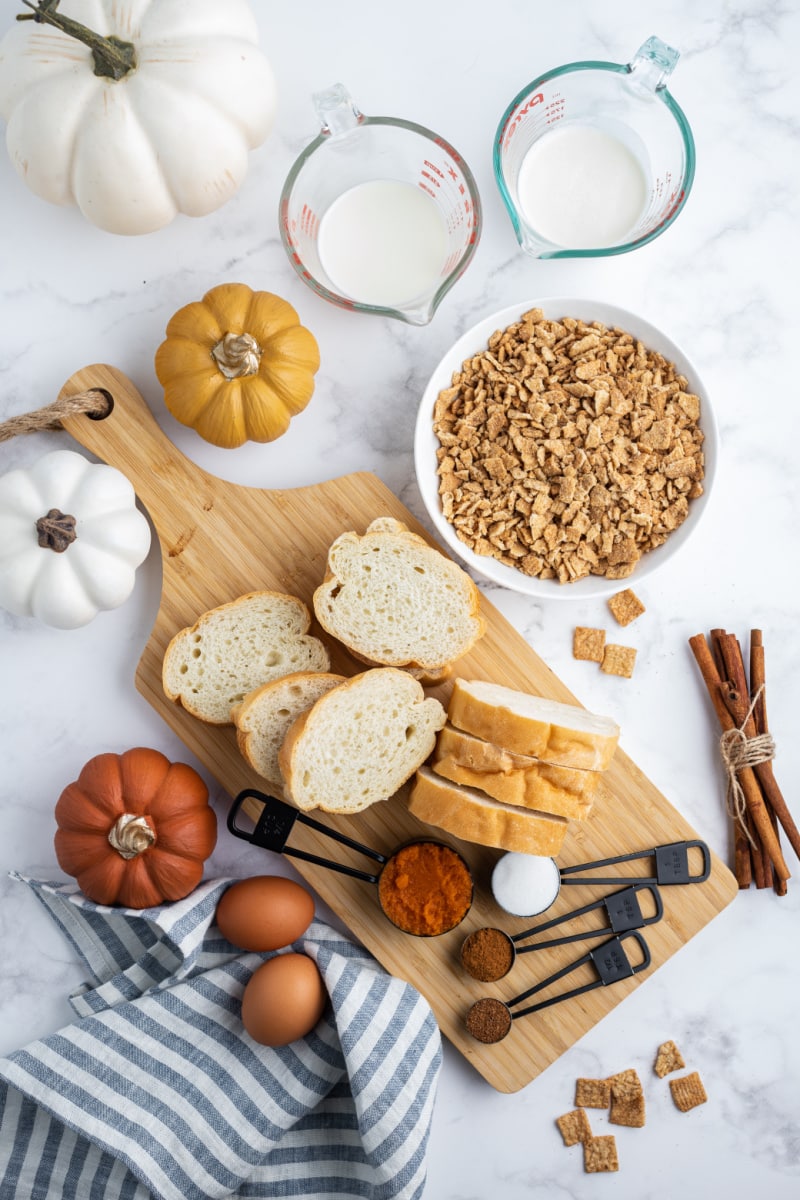 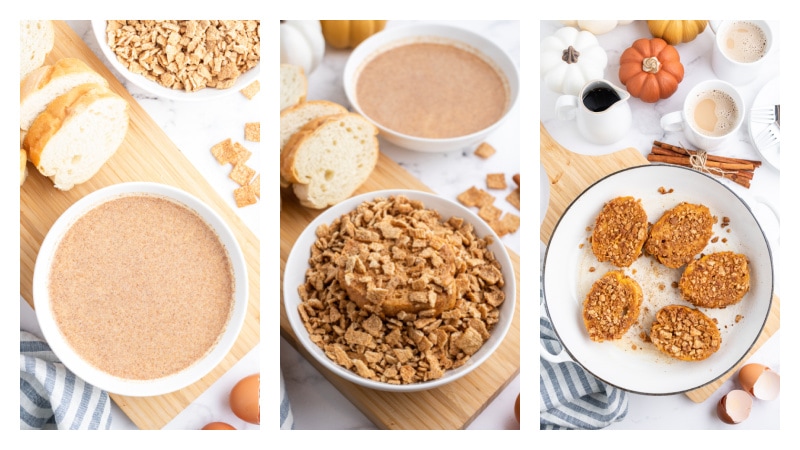 How to make Pumpkin French Toast:

First things first.  You want to use a loaf of French bread that is at least a day old, and maybe even two days old.  Fresh French bread is just too soft for making French toast.  The bread is dunked in a simple French toast batter that is made of eggs, pumpkin puree, milk, cream, cinnamon and nutmeg.  If the bread is too soft, it’ll soak up that mixture like crazy, and you’ll end up with soggy French toast.  That’s not good!

A quick dunk in the batter, and a quick searing in a hot skillet on both sides, keeping the skillet covered while cooking, and it turns out golden brown 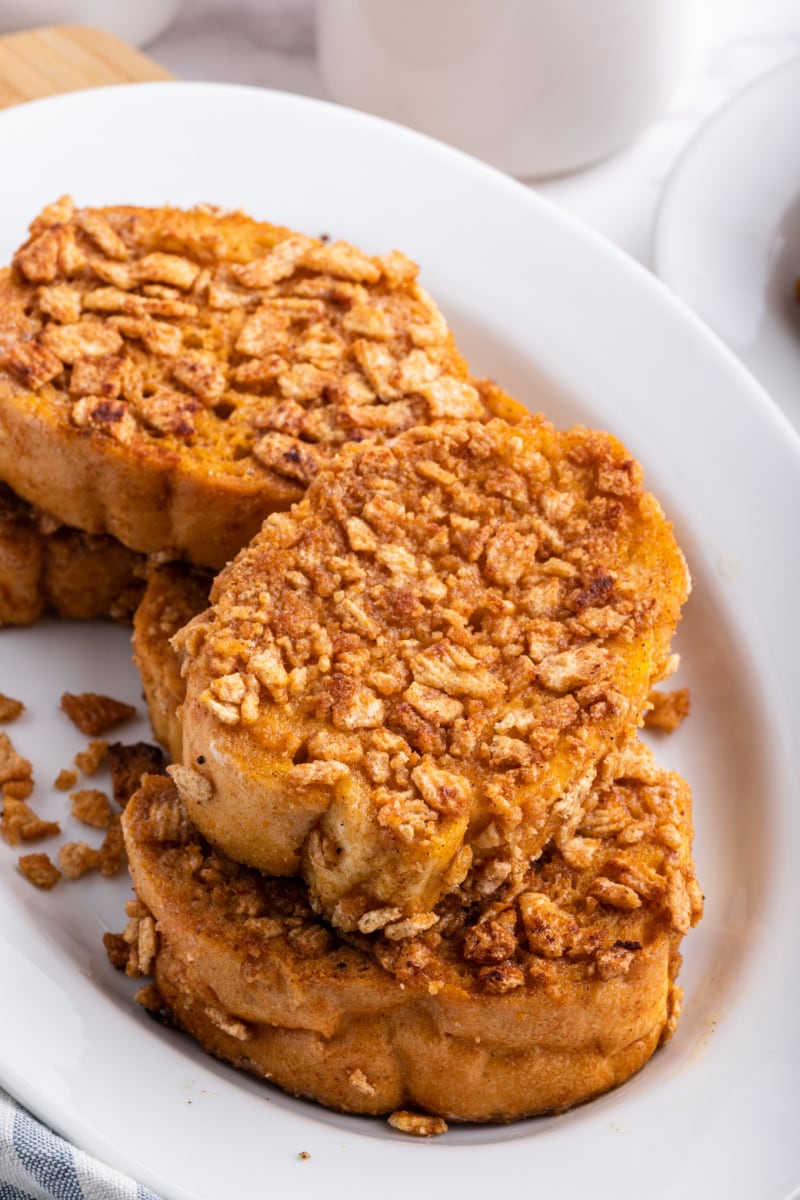 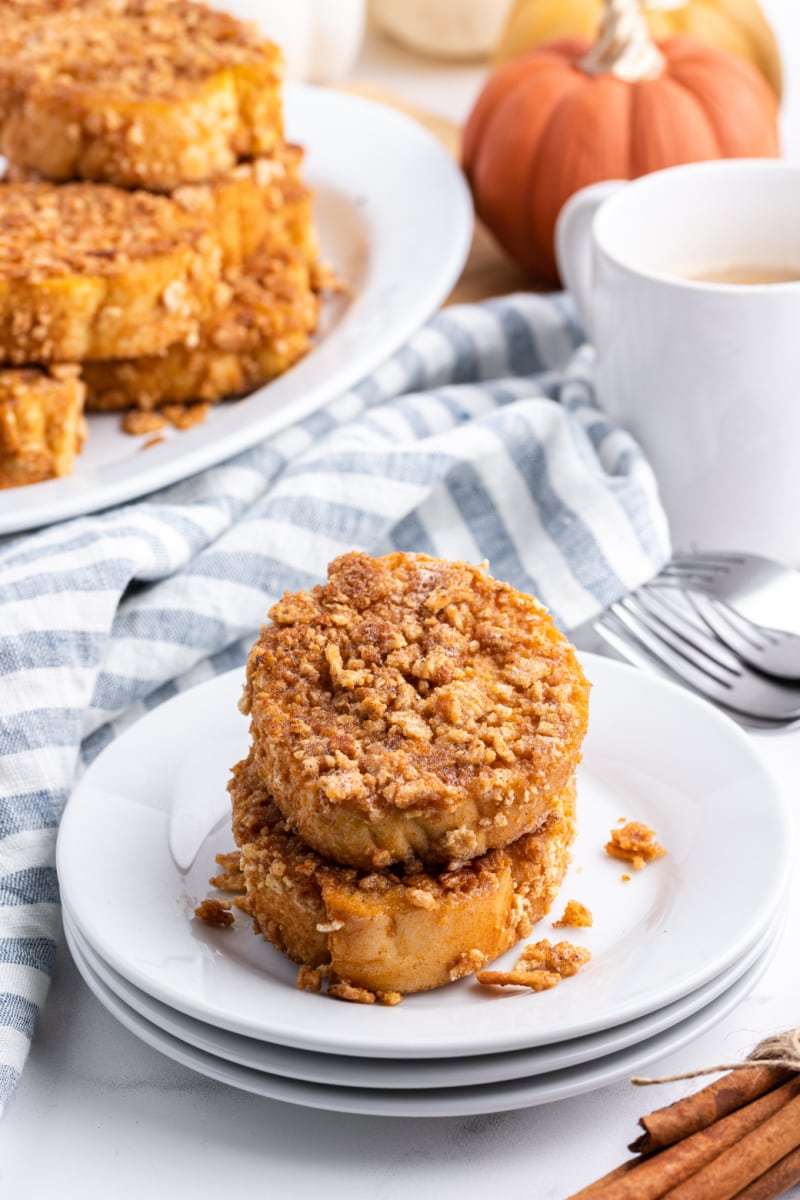 There’s the distinct flavor of pumpkin in this French toast, and the bread absorbs all of the wonderful spices. The cinnamony crust is optional, but I think it adds a unique twist to the recipe. The bread stays soft and pillowy inside, and then a crusty layer forms on the outside. 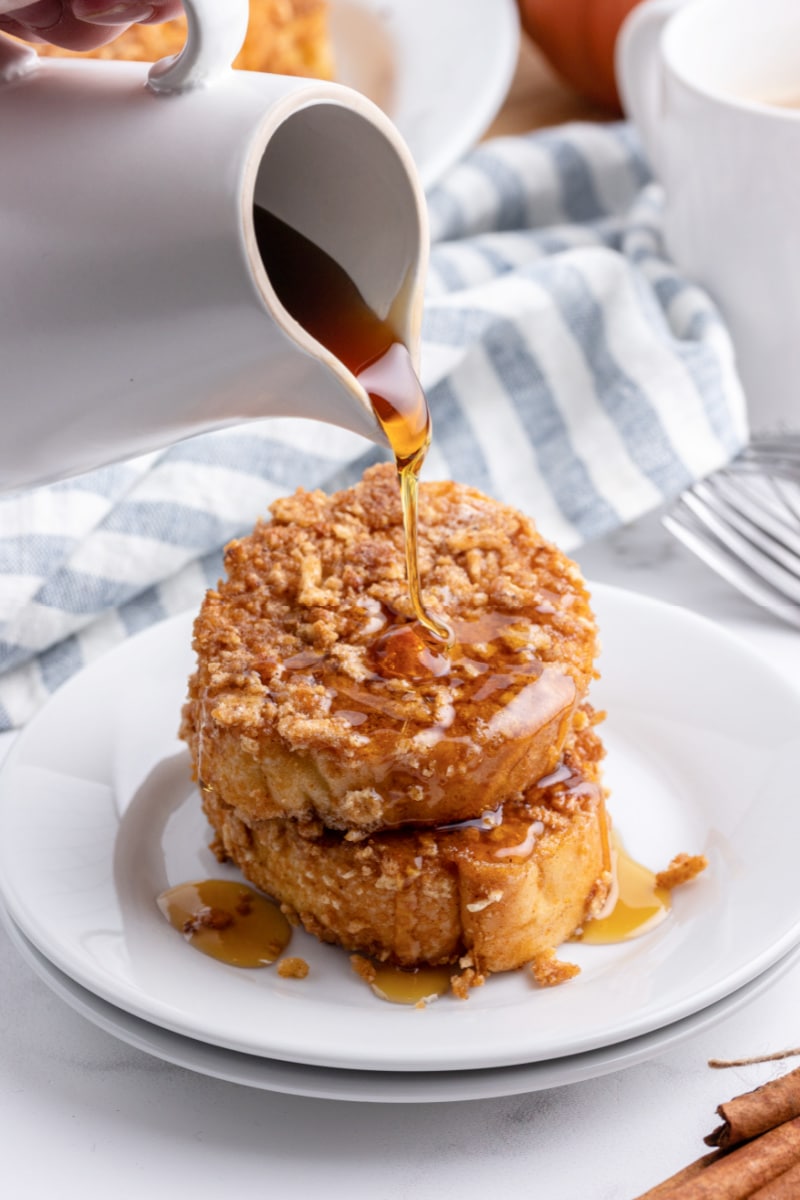 It’s very difficult to eat just one piece!  It’s worth every extra minute at the gym though, so have at it! 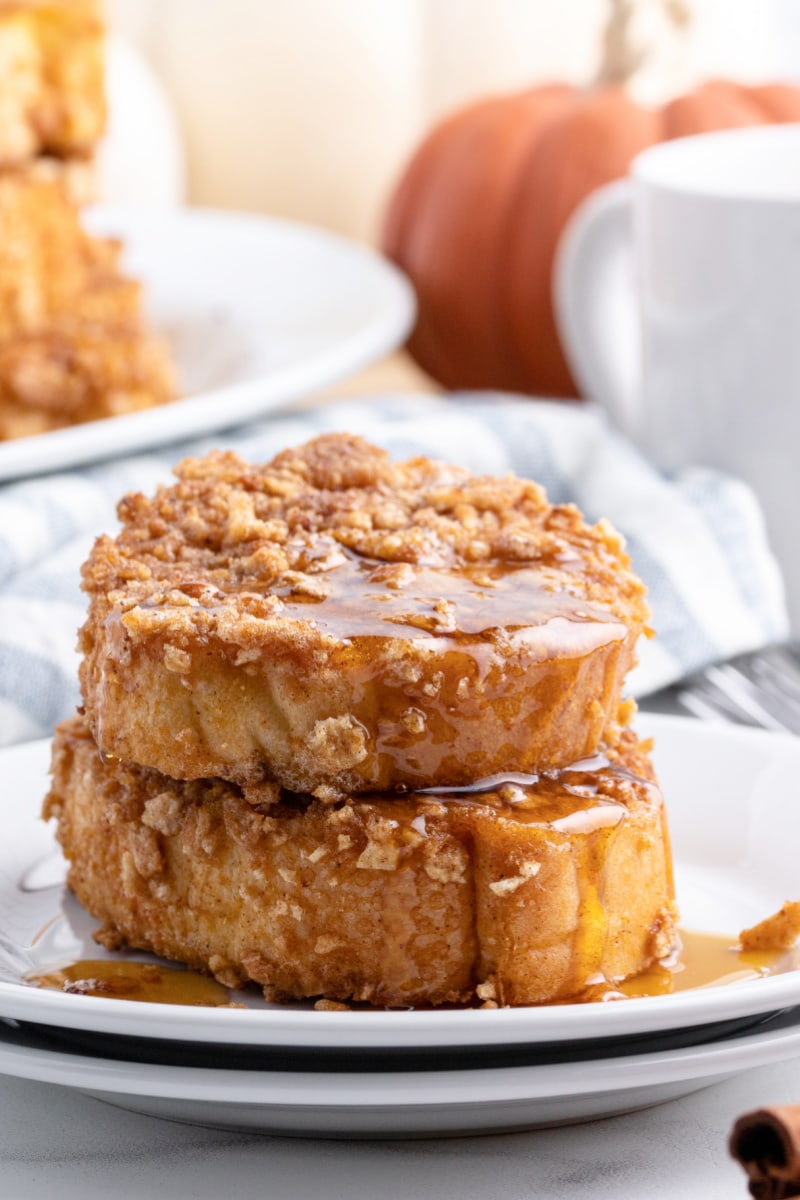 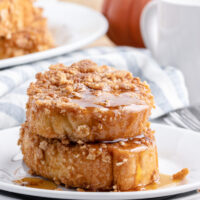 This Pumpkin French Toast is an awesome fall breakfast recipe.  The crunchy cinnamon addition to the crust is completely optional, but oh so delicious!