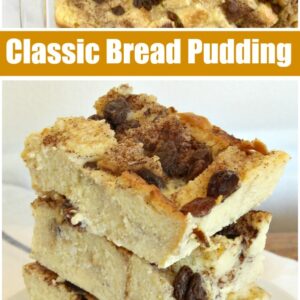 Classic Bread Pudding is a recipe that everyone should have in their collection! 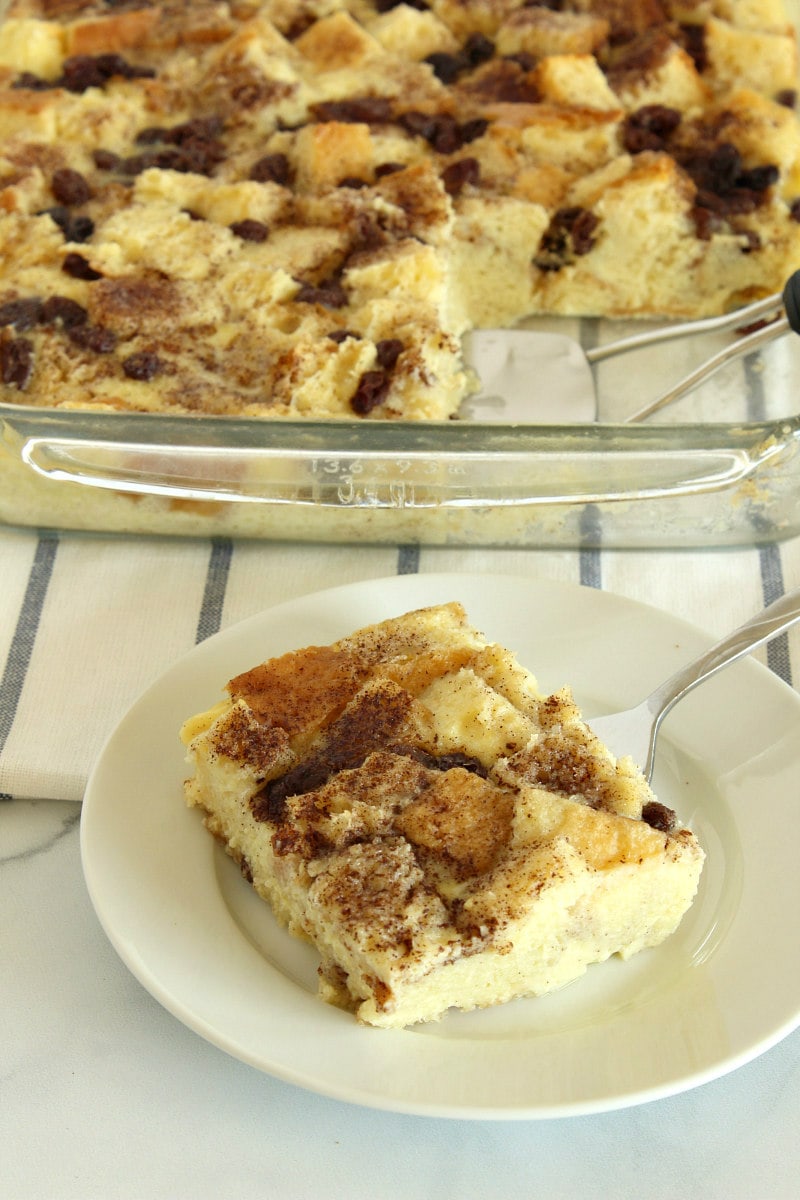 There is nothing fancy about this bread pudding, and that’s a good thing. Classic Bread Pudding is sturdy when you slice it, it’s custard-like, and it’s packed with cinnamon and raisins. That’s this bread pudding recipe.

It’s delicious when eaten nice and warm out of the oven, and it’s just as good eating it chilled as a hand-held dessert. Leftovers of this delicious sweet treat will be good for a few days. 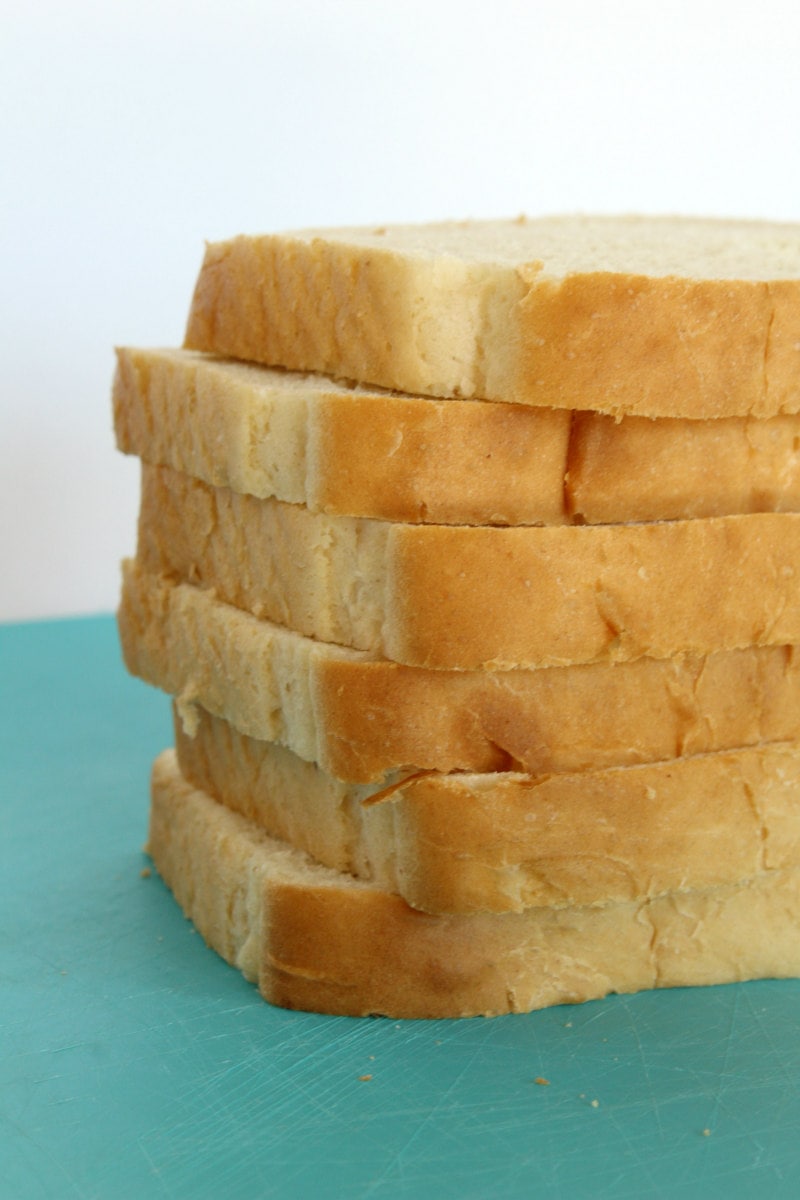 What’s the best kind of bread to use for bread pudding?

For a really basic bread pudding, it’s best to use just general white bread. I recommend you buy a loaf that’s labeled as “thick white bread.” You should also be able to spot a loaf of “Texas Toast,” which is often used to make garlic bread or French toast. 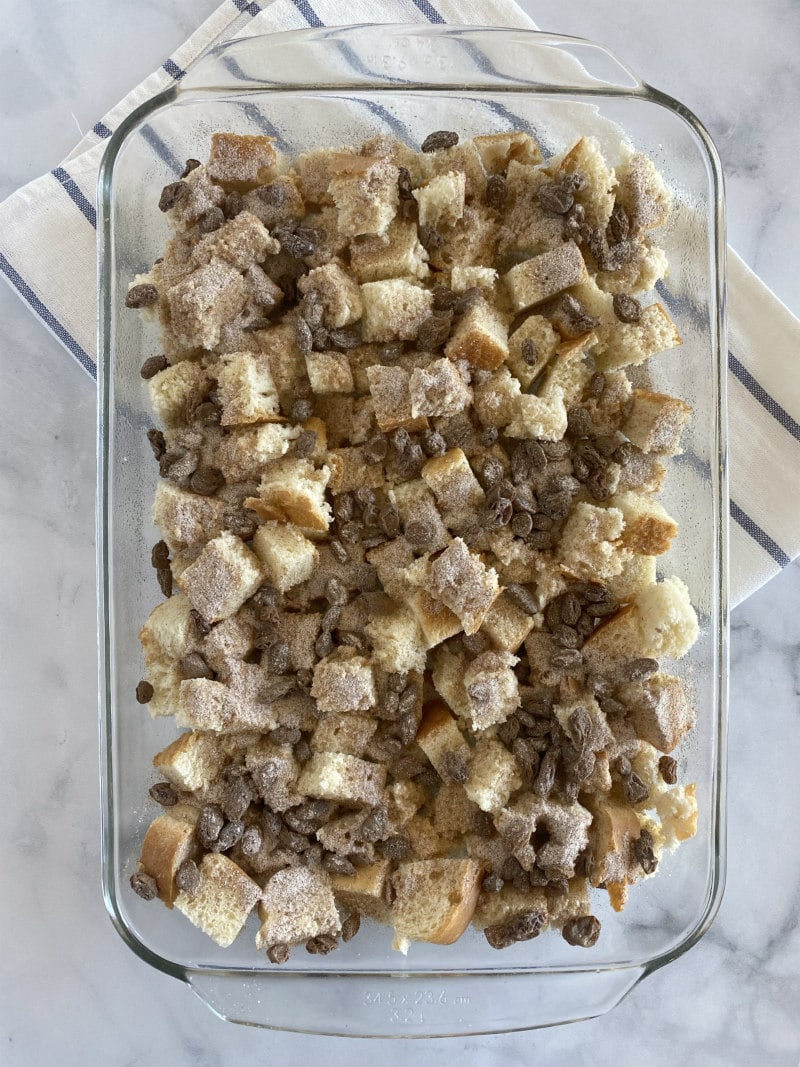 How to make Classic Bread Pudding:

Be sure to scroll to the end of this post to print out the complete recipe so you can make this at home. The bread slices are cut into chunks and sprinkled into a casserole dish. A simple topping is made by combining raisins, sugar and cinnamon. The topping is then sprinkled evenly over the chunks of bread. 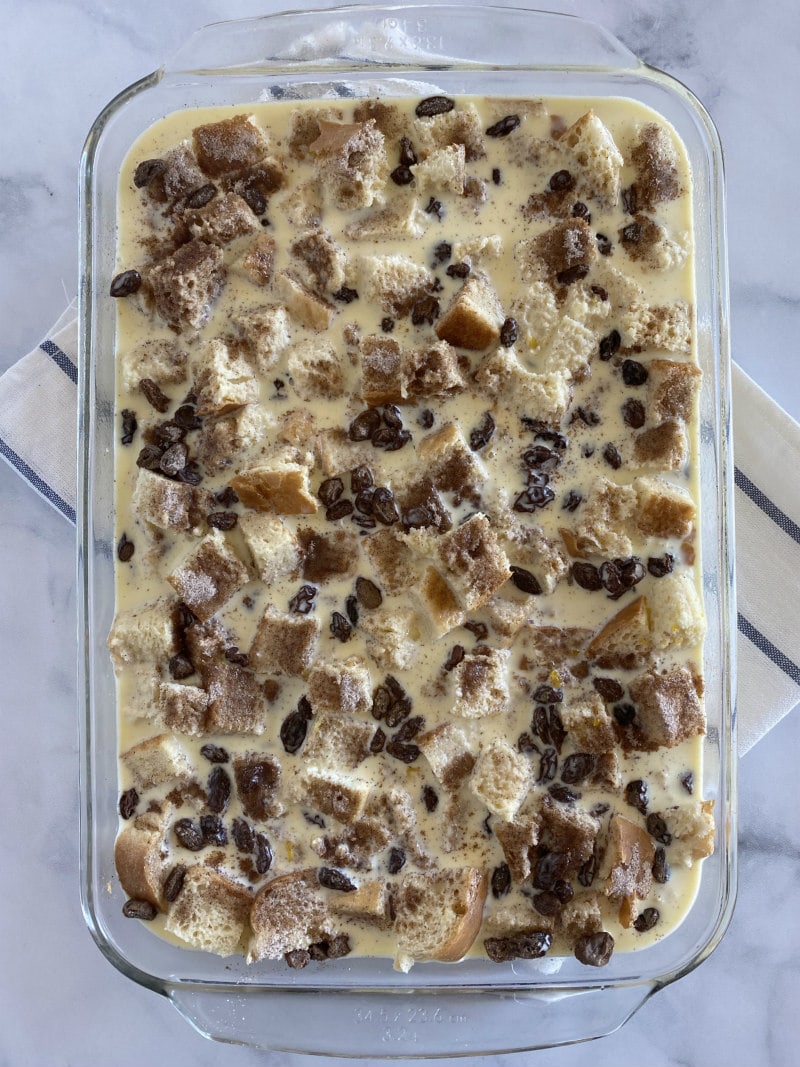 The custard is a mix of eggs, sugar, vanilla, half and half and heavy cream. That’s whisked together and then poured over the sugared bread chunks in the pan. To make the best Classic Bread Pudding, you want the bread to be soaked in the custard. So make it a point to push all of the bread chunks down into the liquid.

The bread pudding bakes for about an hour. Here’s a special note about how to bake the bread pudding. You’ll set the casserole dish into a rimmed baking sheet that has water in it. This means it will be baking in a water bath. This is important for the best outcome of the texture of the bread pudding. 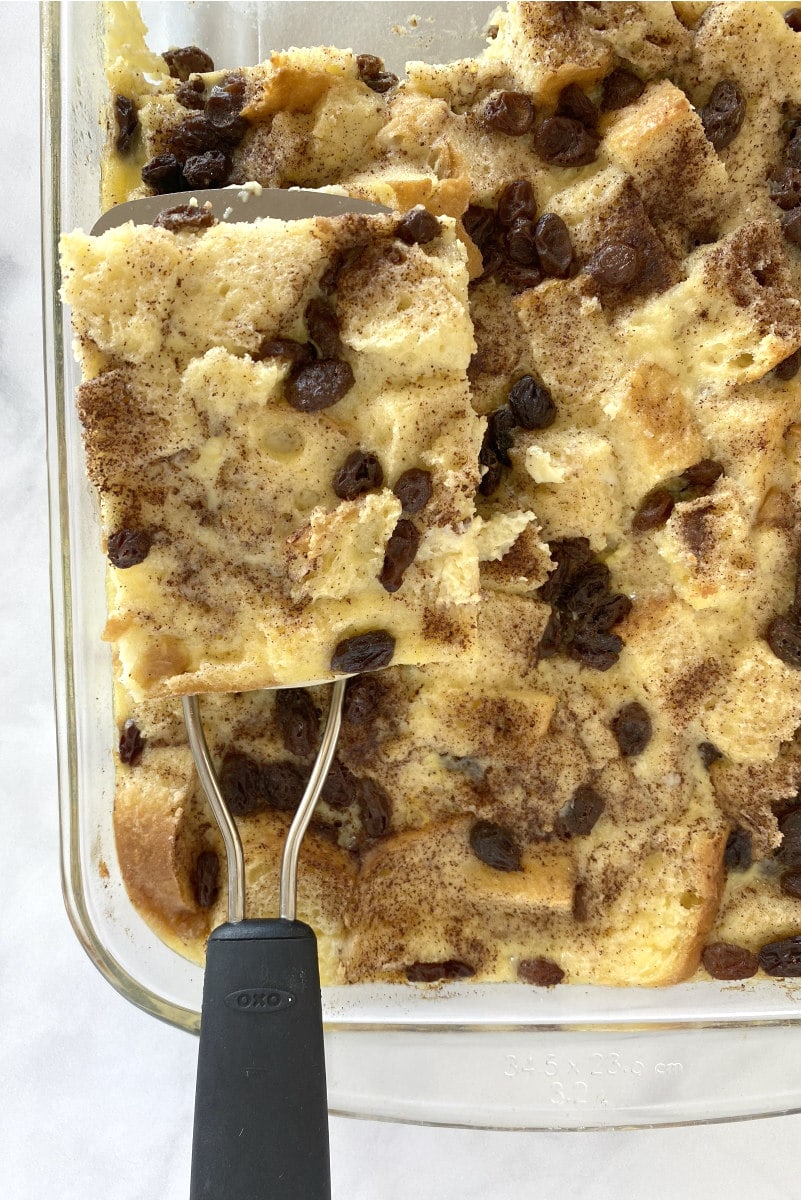 When it’s done baking, the custard will no longer be jiggly. Give the bread pudding a chance to sit for a while before you cut it. You’ll end up getting nice, clean slices. 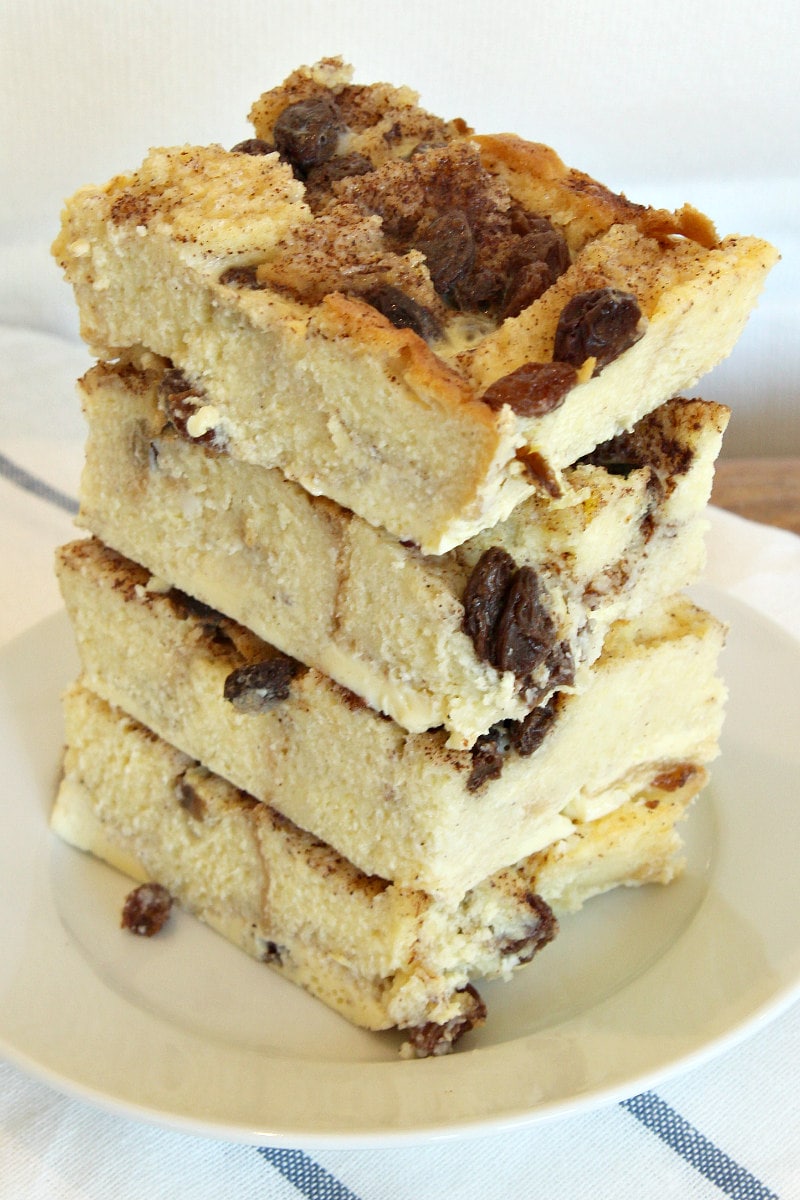 Have you ever been to a 50’s-type diner where they sell classic desserts like bread pudding? This is the kind of bread pudding you’d find in one of those old-time diners. It’s classically delicious. Enjoy! 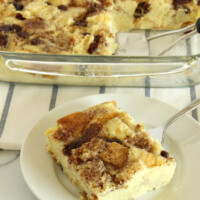