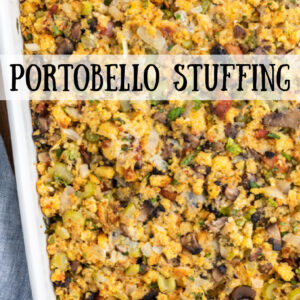 This Portobello Stuffing recipe is a great holiday side dish recipe for mushroom lovers! 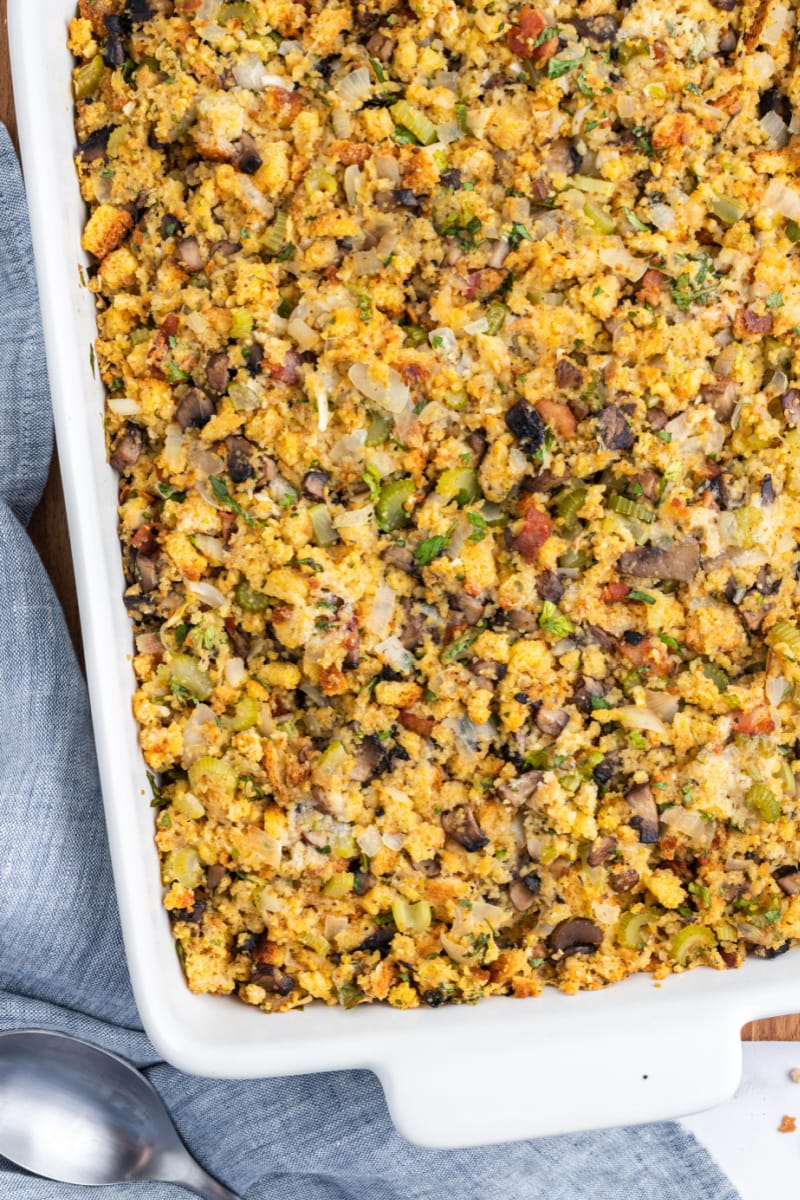 Stuffing has always been a favorite dish to look forward to at holiday meals. My Mom used to make her Classic Stuffing recipe, which my family loved. But I do like to change things up a bit and make different kinds of stuffing recipes now and then. Portobello stuffing is a big time favorite among the mushroom-loving people in my house. It’s likely to be a new favorite for you too! 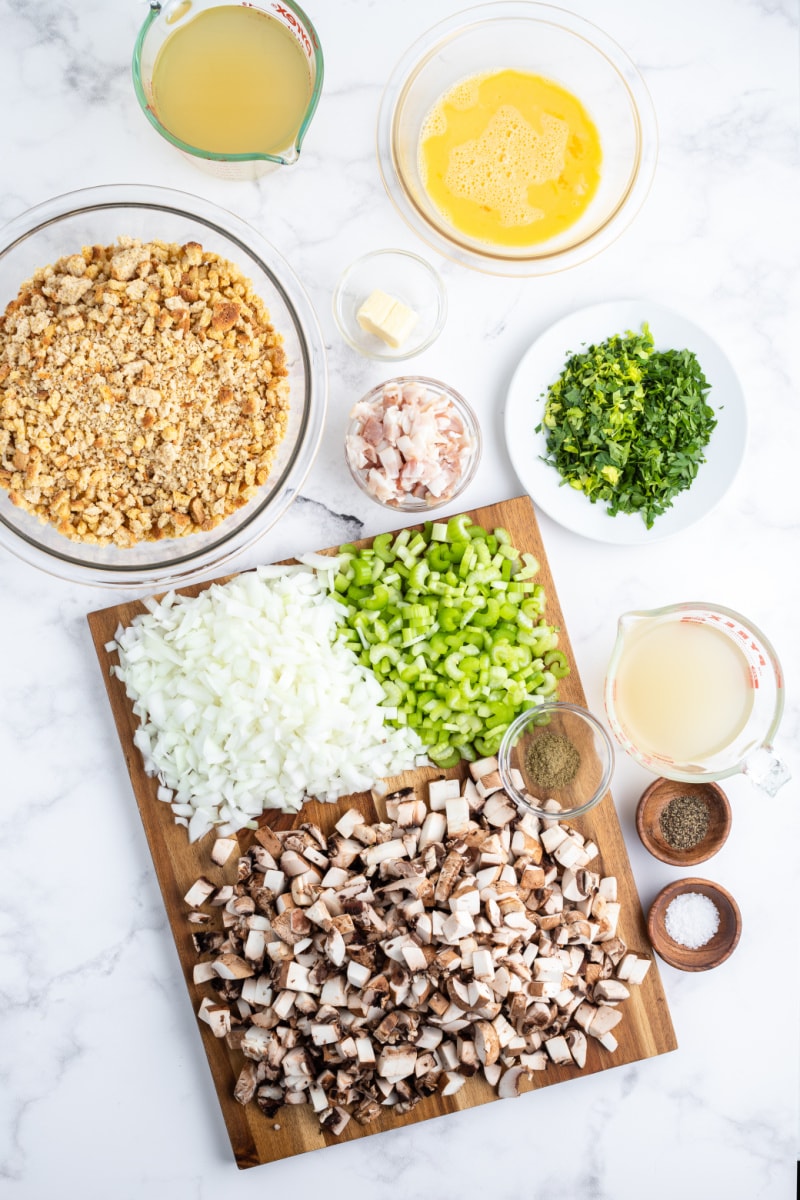 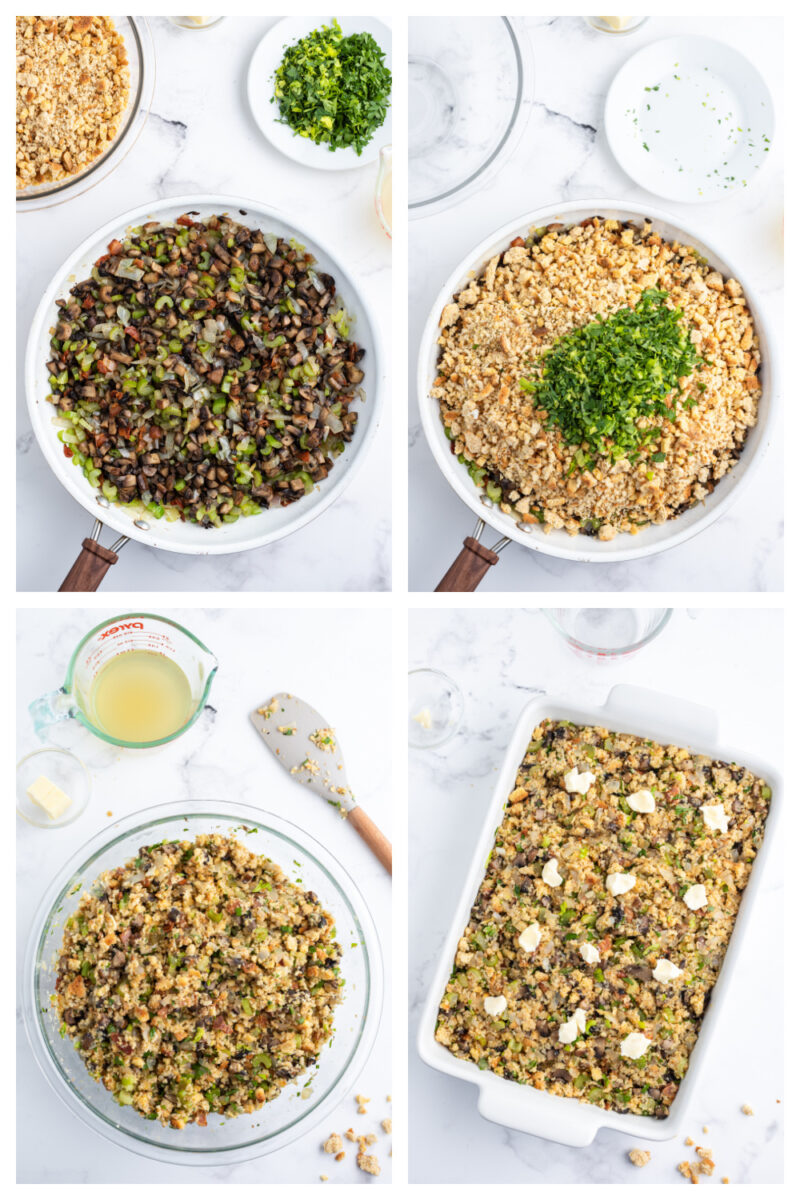 How to make Portobello Stuffing:

The complete, printable recipe is shared at the end of this post. The first step is frying the bacon. Then the onion, mushrooms, celery, sage, salt and pepper are sautéed in the bacon grease until everything is softened up. Then you’ll add stuffing mix, parsley and celery leaves to the pan. Stir it all up, and then transfer the mixture to a bowl. Eggs, wine and chicken broth are tossed into the stuffing until it is nice and moist (but not soggy!) Then the stuffing mix is transferred to a baking dish. Butter is dotted on top. 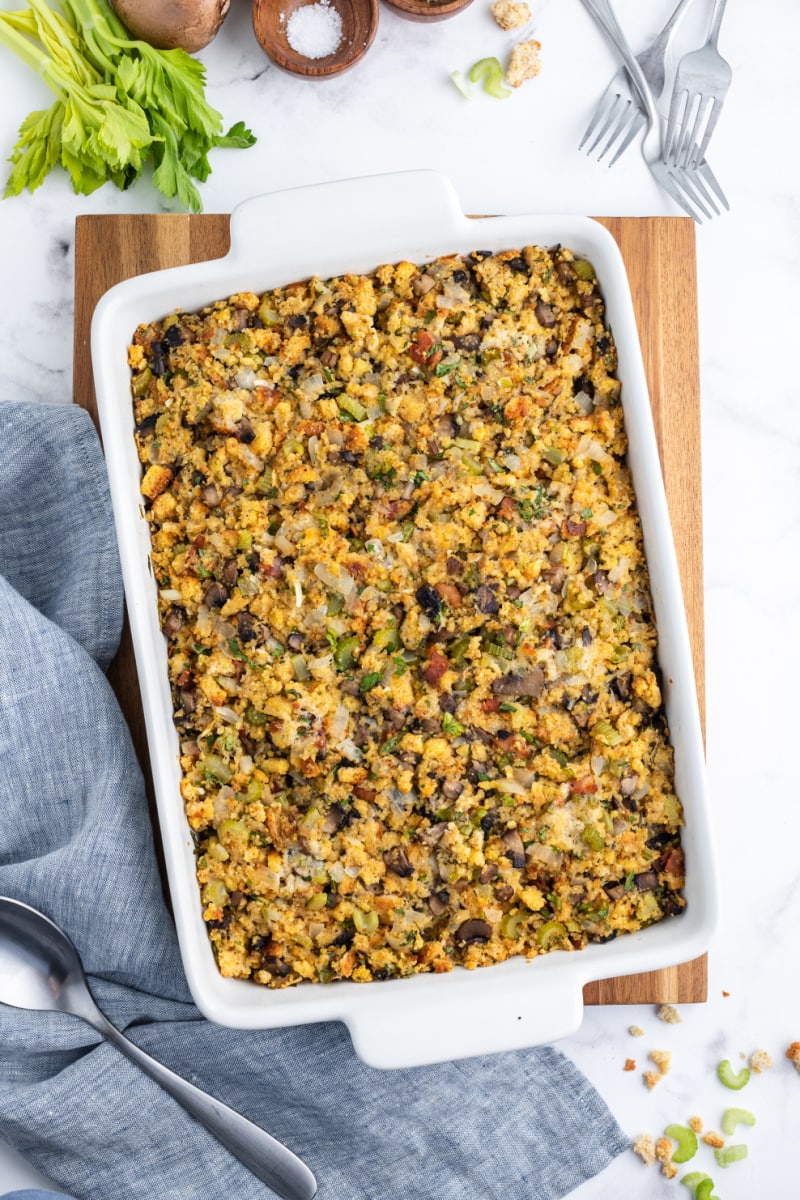 The stuffing is baked (covered) for 45 minutes. That’s it! It’s a pretty simple stuffing recipe to make. And the result is that it’s so delicious! 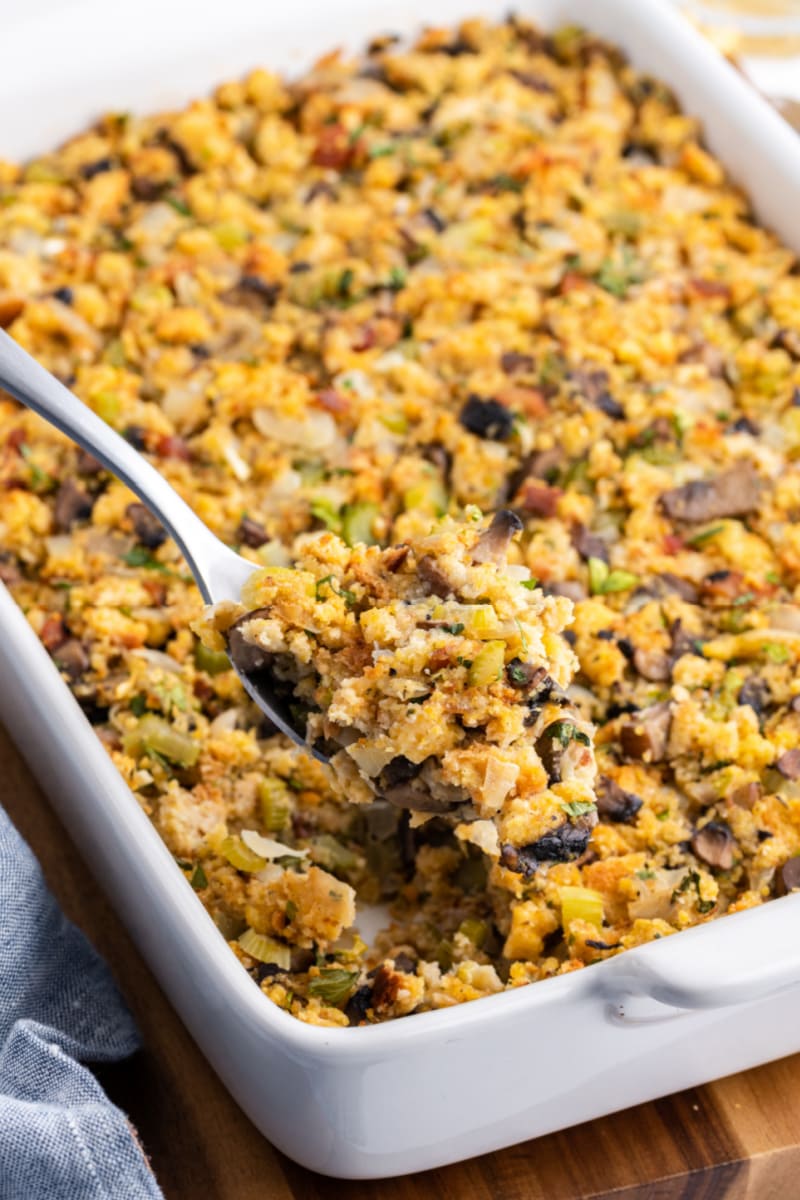 What’s the difference between stuffing and dressing?

It’s pretty simple, really.  The difference is how they’re prepared. Stuffing is defined as a mixture to stuff another food- usually some kind of poultry.  But stuffing can also be cooked in a casserole dish, and people still tend to call it stuffing!  Dressing is generally defined as stuffing that is cooked in a pan outside of the main dish. 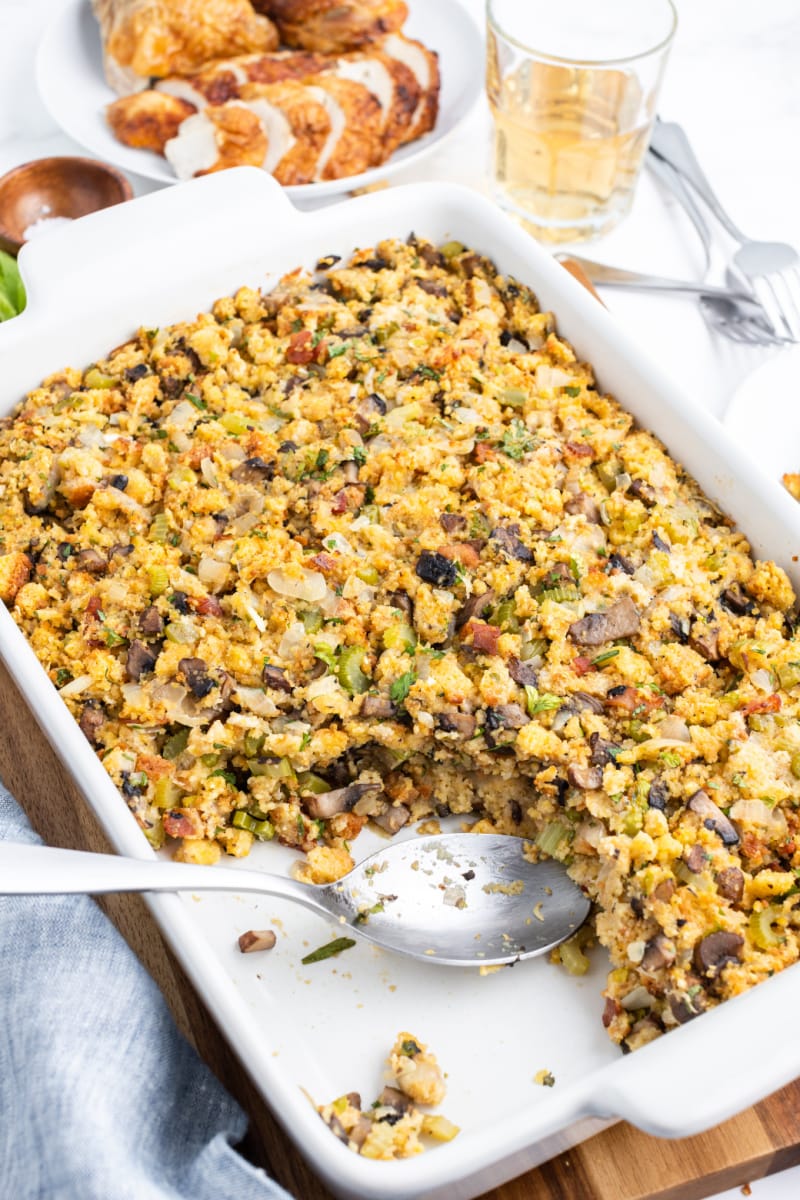 Although the recipe is for portobello stuffing, it’s really okay to use whatever mushrooms you’d like for this recipe. The recipe also calls for using a cornbread stuffing mix. You can use that, but you can also use any kind of stuffing mix. Or you can chop your own bread and toast it to make homemade stuffing bread cubes. If you don’t like to cook with alcohol, you can leave out the wine and use all chicken broth. 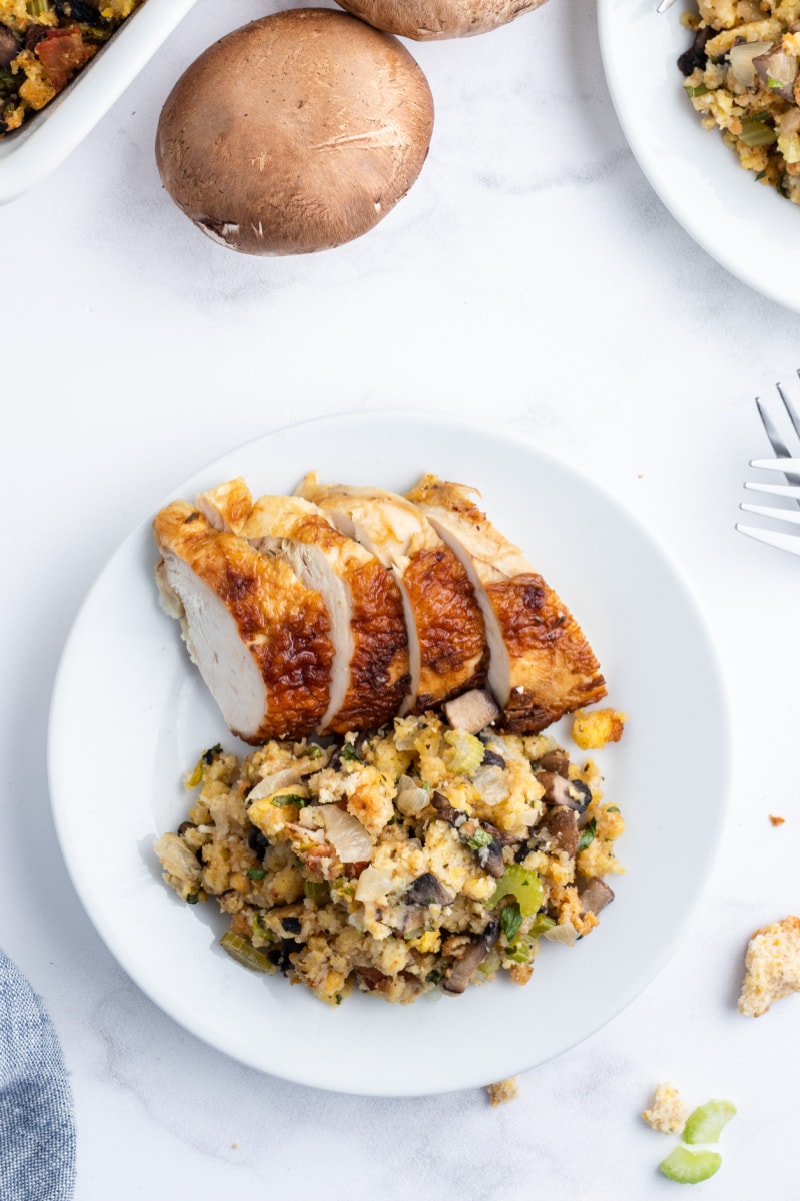 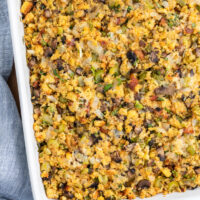 Bacon and plenty of mushrooms are added in to this cornbread stuffing!