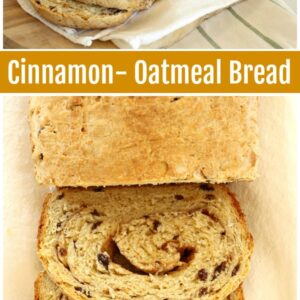 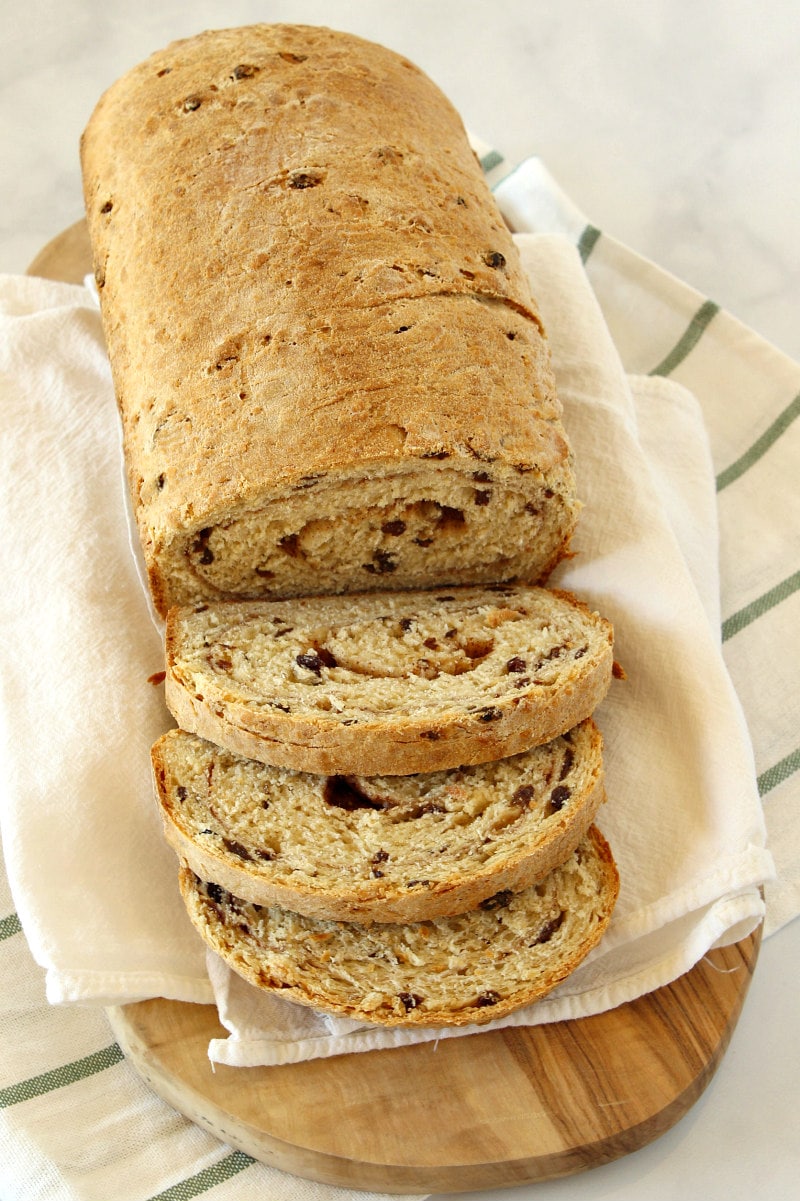 If you are lucky enough to find yeast on your grocery store shelves, then you can make this bread! It’s a beautiful and delicious, homemade bread recipe. And it’s the perfect at-home baking project to try when you’re looking for things to do. It has two rise times, so it’s a task that will take some time. Do it with love. You’ll be so proud of this creation!

How to make Cinnamon Oatmeal Bread:

Be sure to scroll to the end of this post to print out the complete recipe so you can make this recipe at home.

This is a yeast bread recipe. You’ll begin the recipe by combining active dry yeast with a little bit of warm water. This “activates” the yeast so it will work in helping the bread to rise in the recipe. The base of the dough is made with all purpose flour. Milk, brown sugar, salt, eggs and butter are added to the flour and oats. The yeast mixture is mixed in too. And then you will also stir in dried currants or raisins. After the dough is made, it’s kneaded by hand for about 10 minutes. I love the process of hand-kneading because it’s comforting. You can let the hook on a stand mixer do the kneading for you if you don’t wish to do it by hand.

The dough is then put into a bowl, covered with a towel and given about an hour to rise. 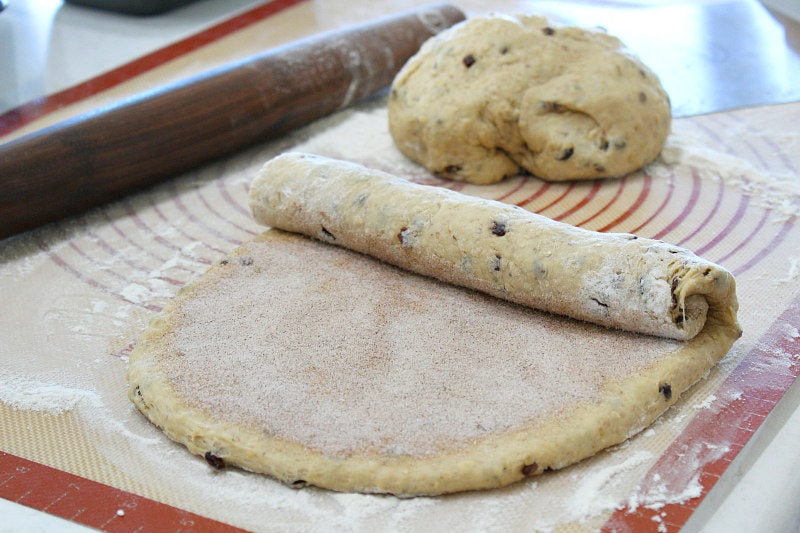 Since this recipe makes two loaves, you’ll divide the dough in half and roll each into a rectangle. You’ll brush each piece of rolled out dough lightly with butter, and top it with a small amount of sugar and cinnamon. Then the dough is rolled up and placed into loaf pans. 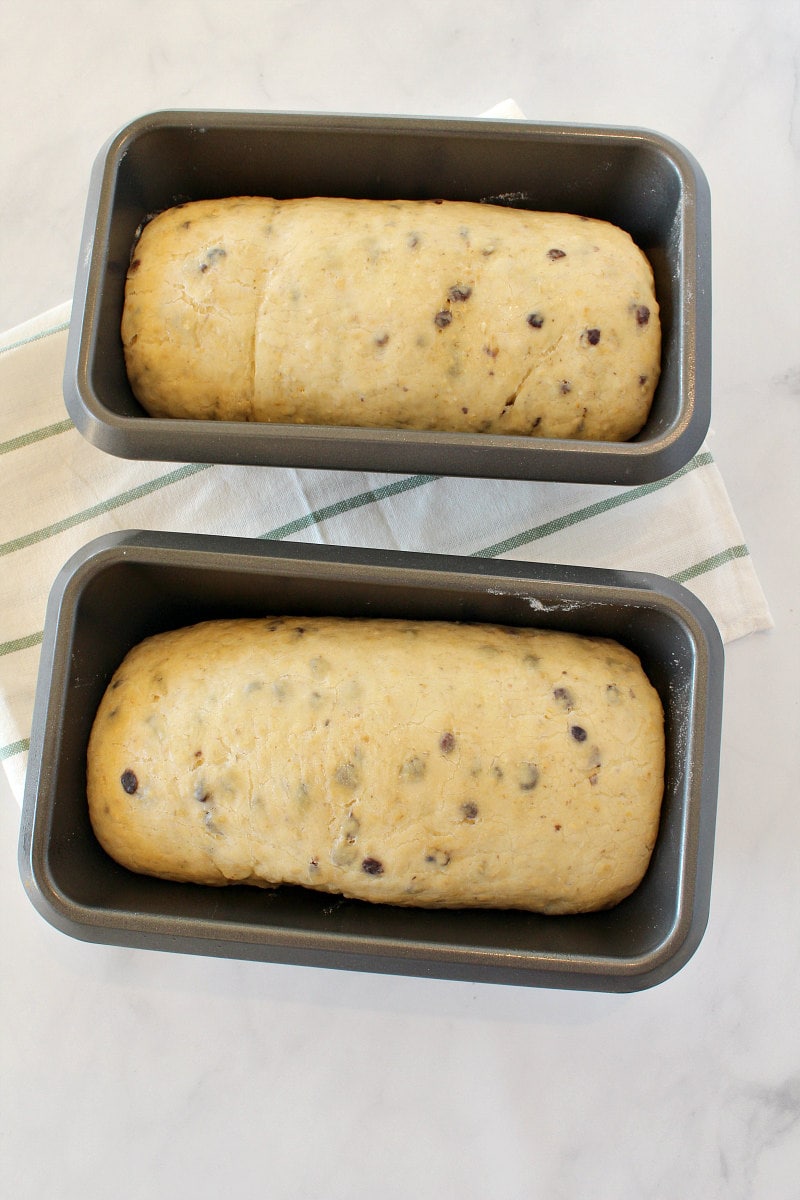 This is the second rise for this dough. Just put a clean dish towel over the pans and let the loaves rise for about an hour. It’s best to put them in a warm place for rising. I usually try to put them near a window if it’s a sunny day. Or near the stove if I’m cooking other things. You can also turn on the light in the oven and let the loaves rise in the oven (no heat turned on– just the light).

After the second rise, the loaves are baked for about 45 minutes. 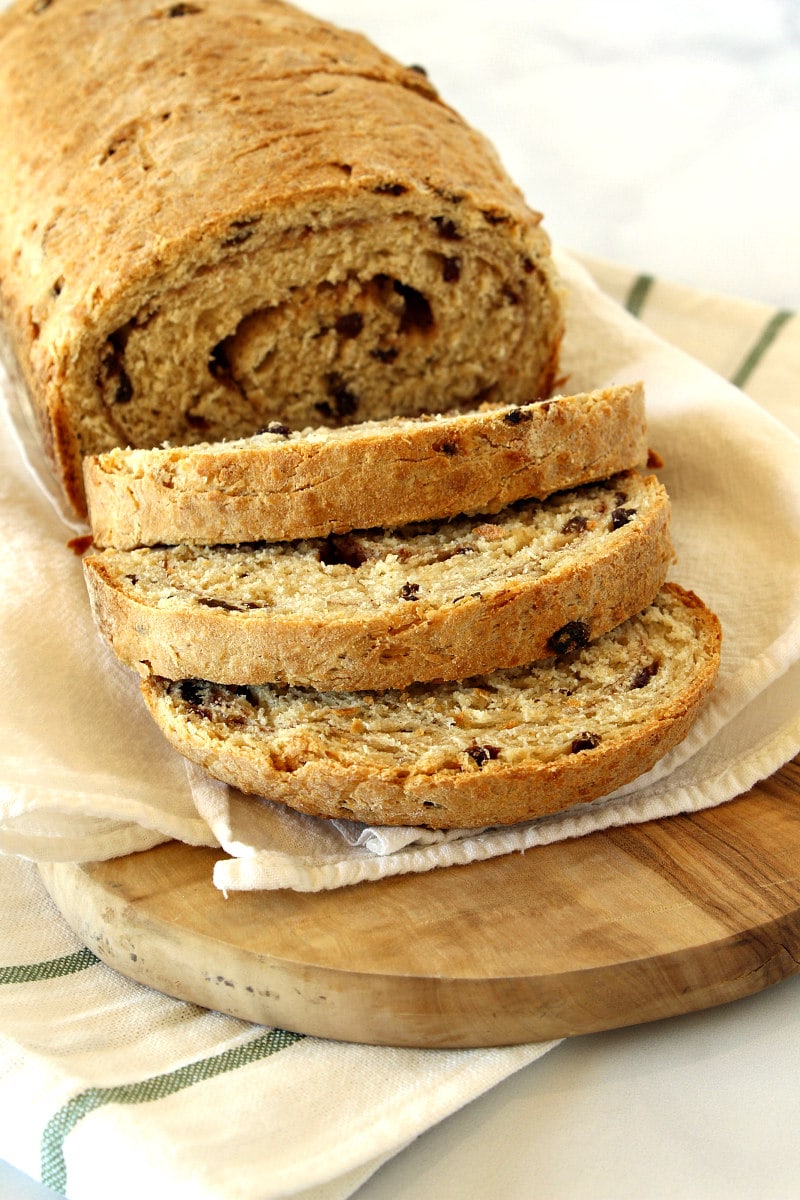 Since this recipe makes two loaves, you can plan to bake and then share one loaf with a friend. Surprise a neighbor by wrapping up a loaf and putting it on the front doorstep with a sweet note. What a nice surprise that would be in these tough times of staying at home! If you have a larger family, keep both loaves! 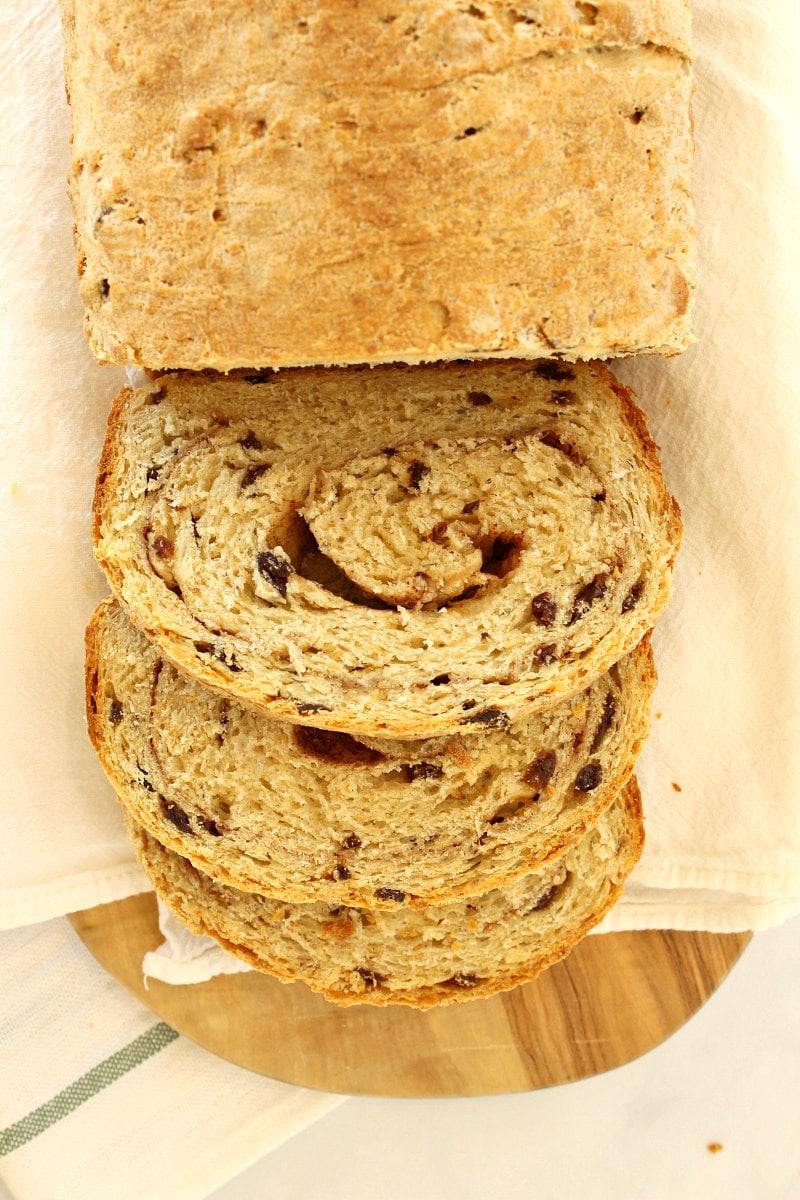 What’s the difference between Currants and Raisins?

Dried currants are dried tiny raisins (usually sold as Champagne grapes). Raisins are dried large grapes. This recipe calls for using currants since they are easily distributed throughout the bread because of their size. Regular raisins can be used as well. They’ll just be larger in size than the currants. 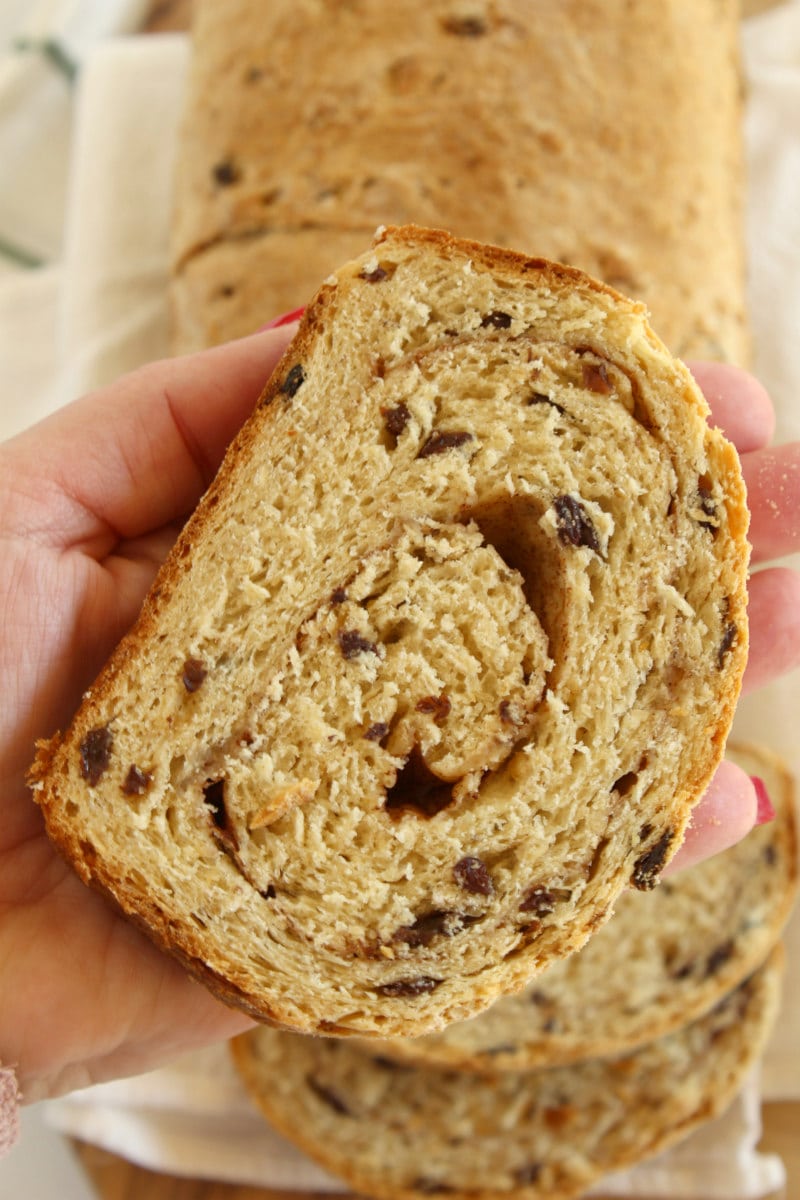 How to store Cinnamon Oatmeal Bread:

Keep any bread that you’re currently eating wrapped well, or you can store it in a covered container. Slice off pieces when ready to eat. If you’d like to freeze one loaf, wrap it well with plastic wrap and foil. Then place it in a freezer zip bag before freezing. 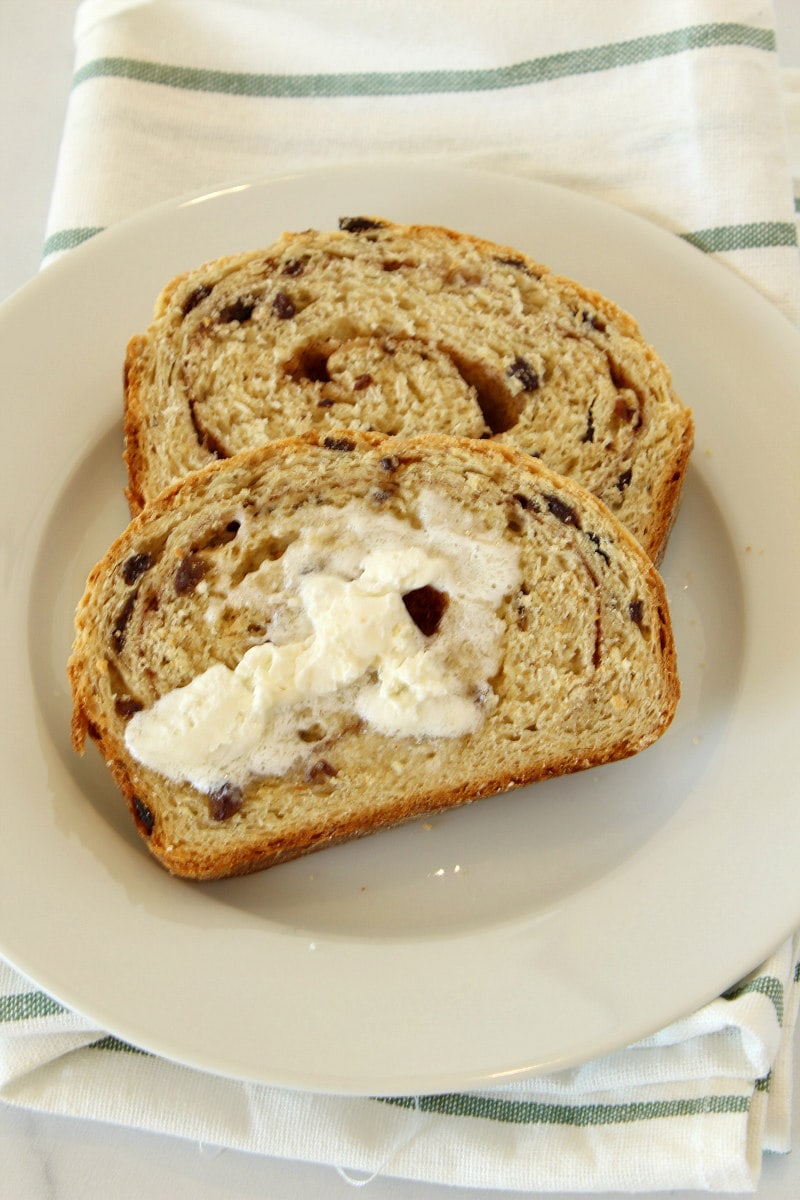 It’s suggested that you toast individual slices and eat them with butter. I like to drizzle a little honey on mine. Enjoy! 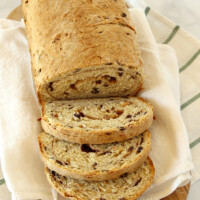 A simple yeast bread with a cinnamon swirl!