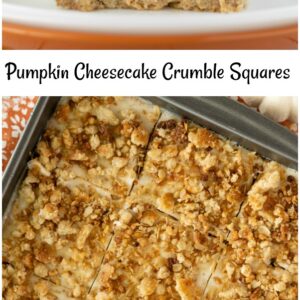 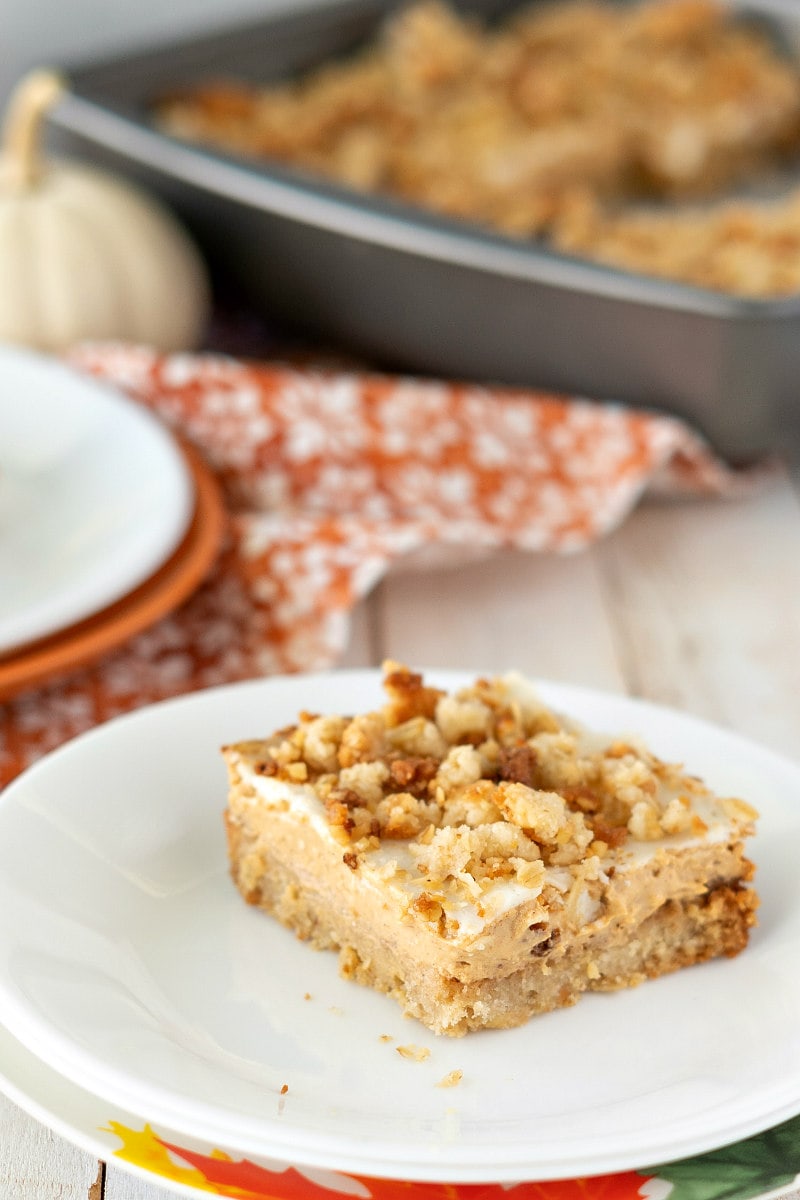 These amazing cheesecake squares originally appeared in Bon Appetit magazine a long time ago. This dessert is made up of three layers: crust, pumpkin filling and a sweet sour cream topping. It’s a great addition to a fall dessert table.  You can cut them into 16 small squares.  They’re a yummy, grab-and-go treat. If you’re a lover of pumpkin cheesecake, that filling in the middle is completely amazing. 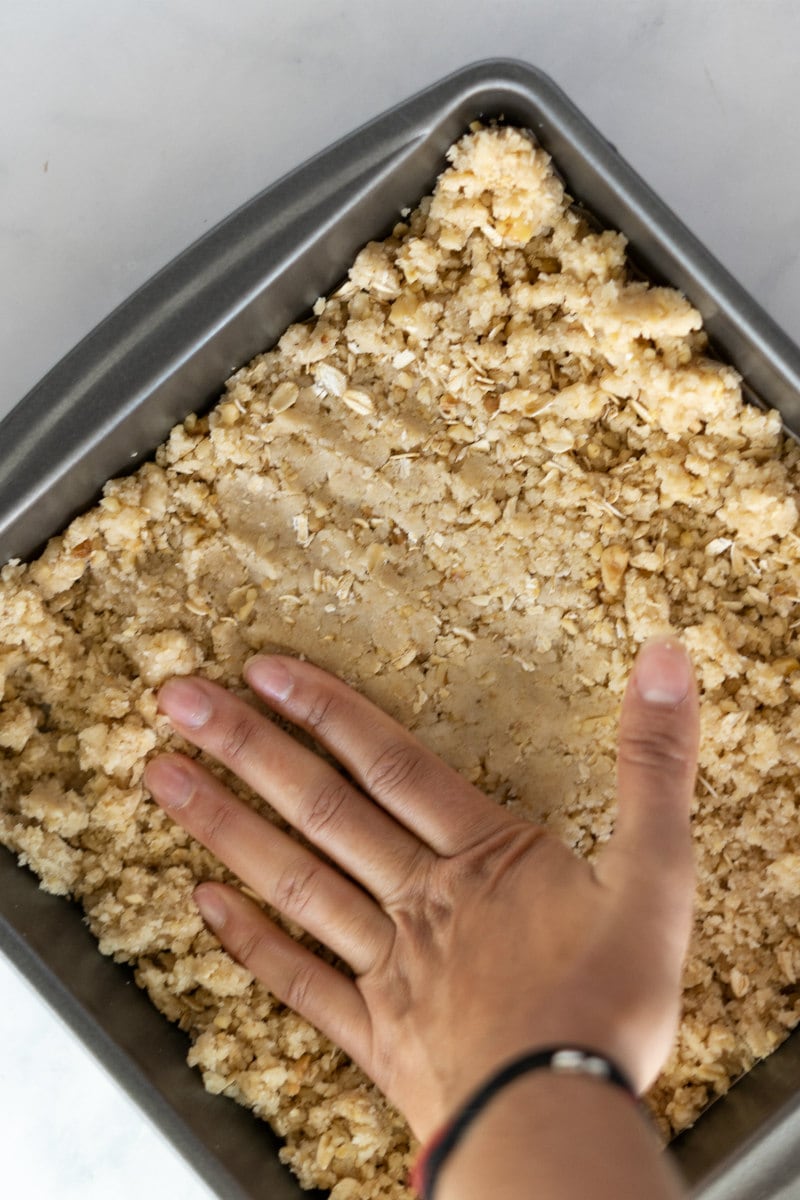 It’s a buttery, pecan-oat crust.  You’ll mix the ingredients and then take out a bit of the crust crumbs to set aside.  The rest are pressed into the bottom of a square pan.  The crumbs you set aside will be baked too– on a separate baking sheet.  Those will act as the crumbly topping for these pumpkin cheesecake crumble squares. 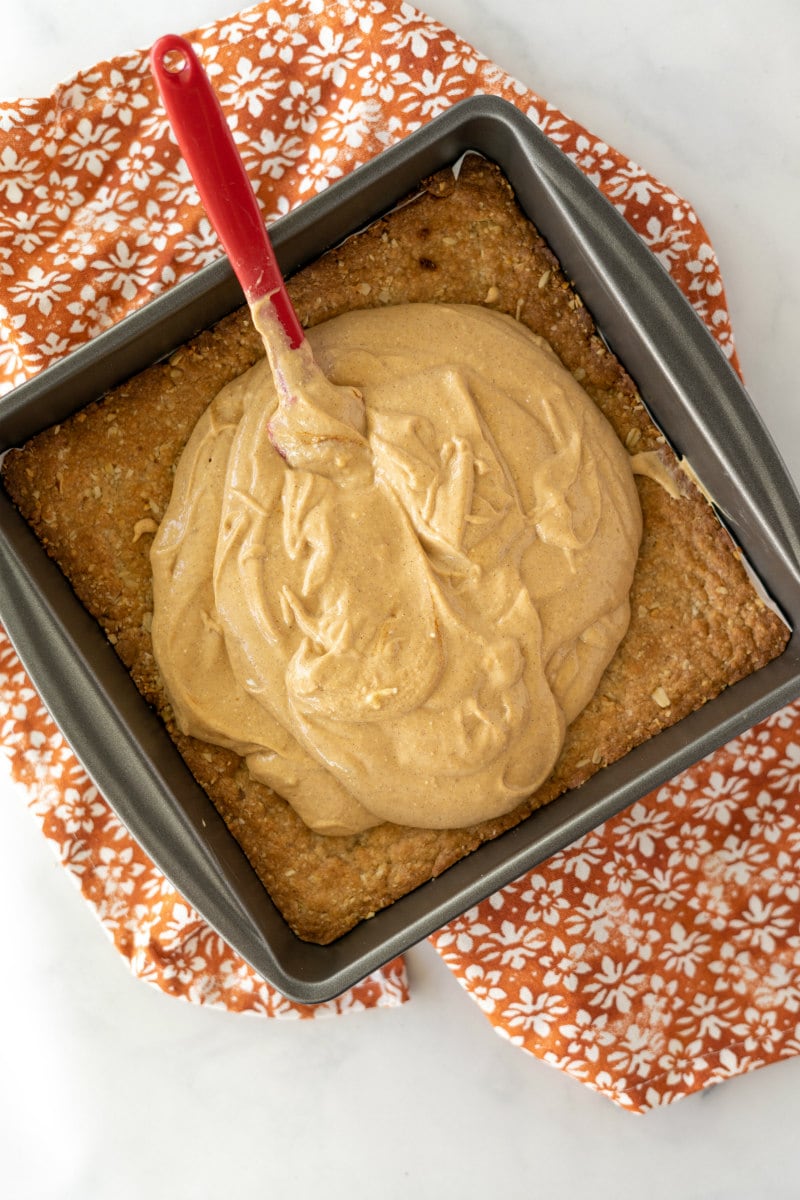 It’s basically pumpkin cheesecake in the middle.  You’ll combine the ingredients, spread them over the baked crust, and then you’ll bake it again. 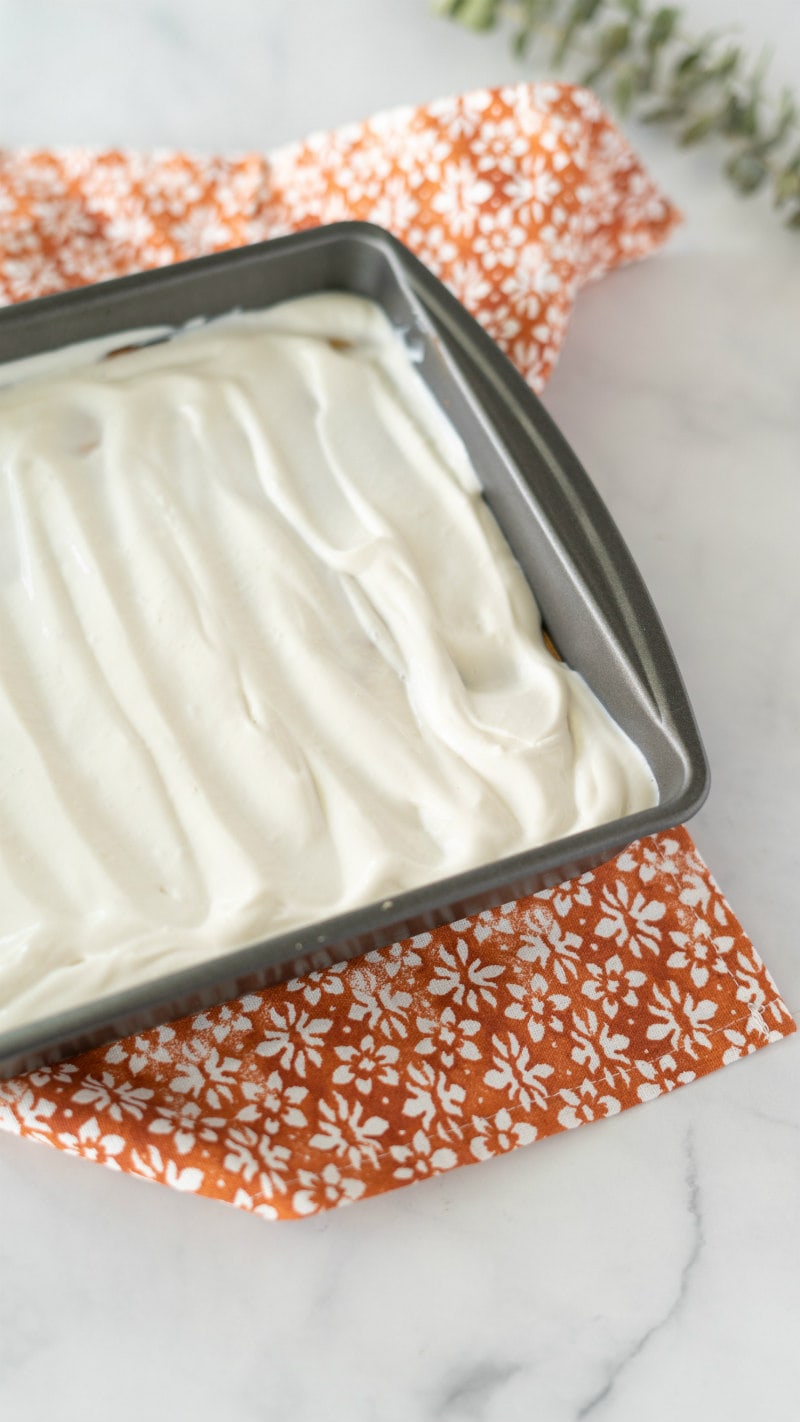 Every good, classic cheesecake has a sweetened sour cream topping, and that’s what this is. It’s a simple mix of sour cream, sugar and vanilla.  It’s mixed and spread on top of the pumpkin cheesecake layer.  Then it’s baked for just 5 minutes. 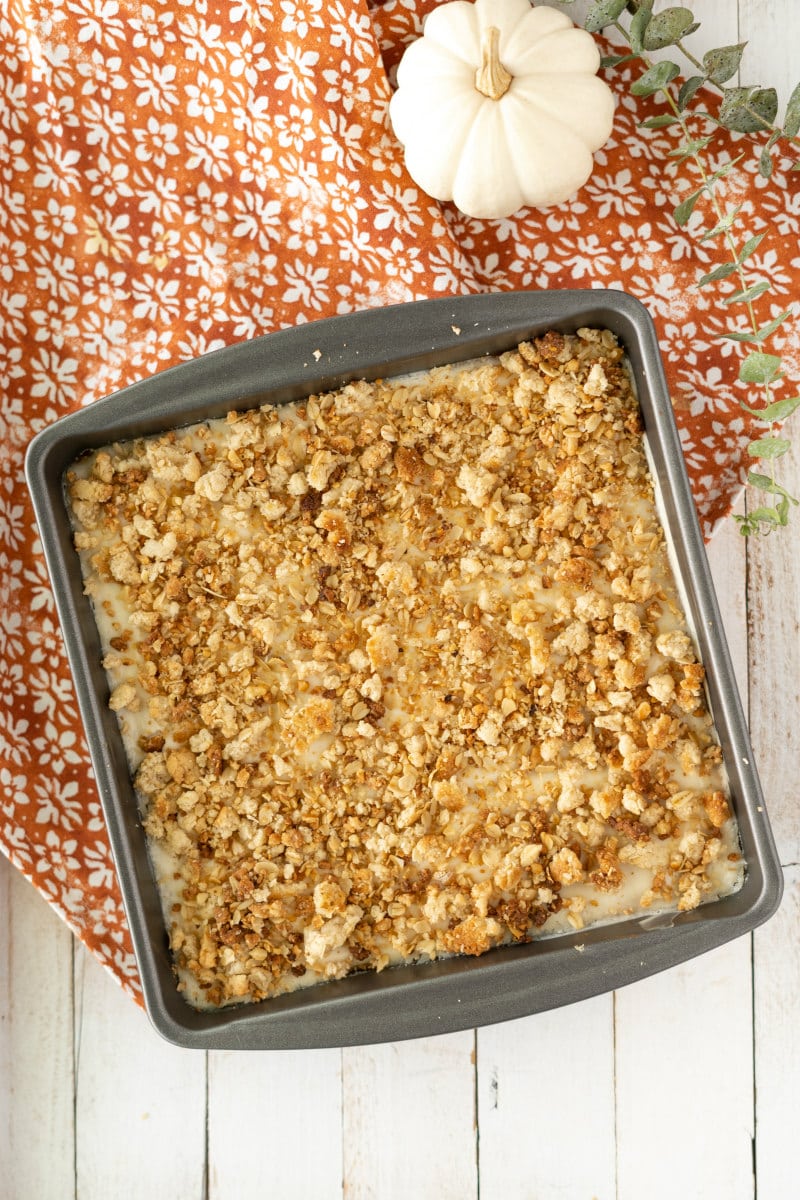 Finally, those crust crumbs that you cooked in the beginning are sprinkled on top and pressed in gently. At this point, the pan should be refrigerated for a least a couple of hours– just until everything is set. 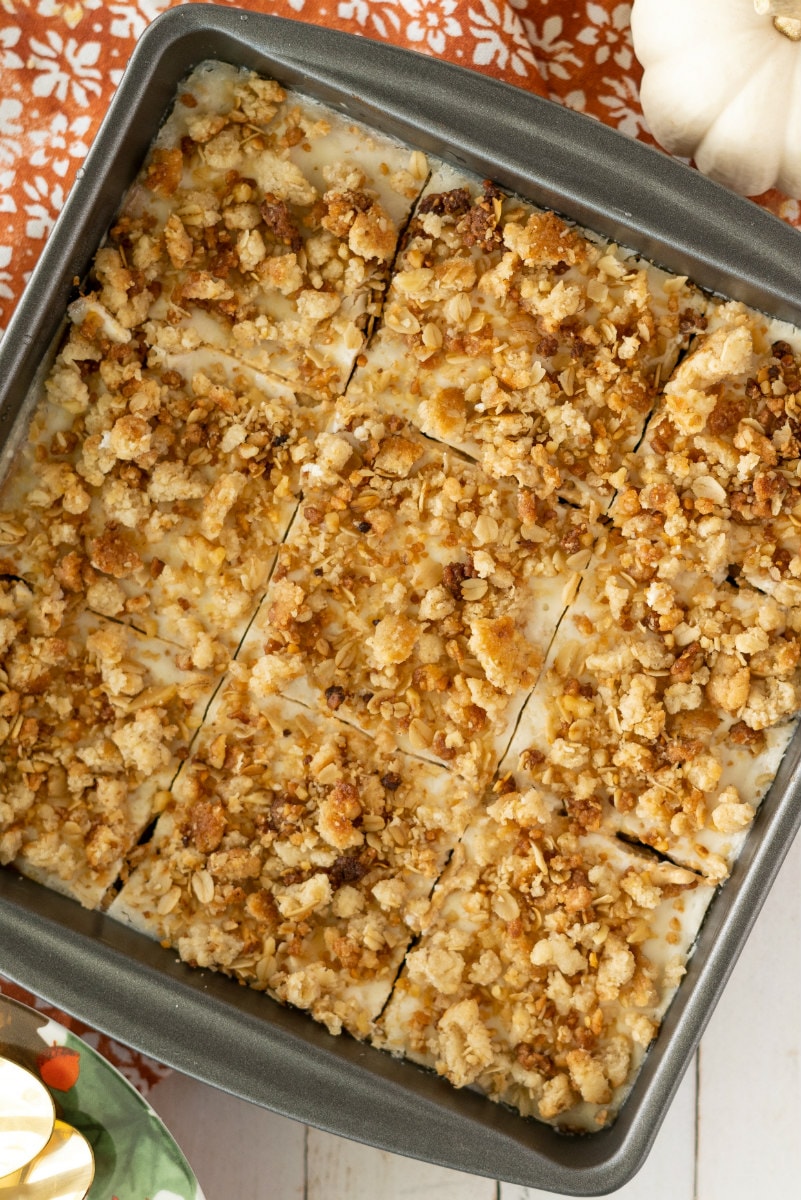 Then you can cut it into squares.  The photo shows nine squares, but that a very generous serving!  It’s better to cut them into 16 squares.  The dessert is rich, so a smaller square serving is just perfect. 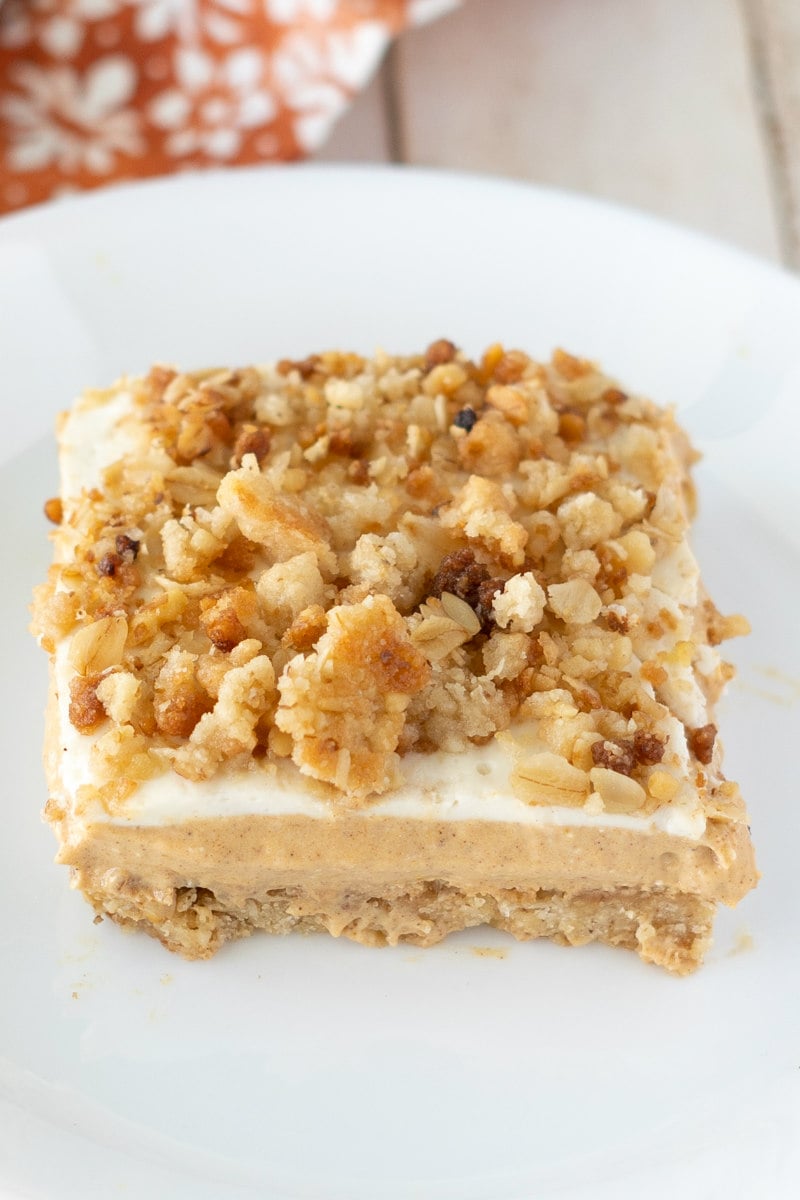 You can prepare this dessert up to two days ahead of serving.  Just keep plastic wrap over them in the refrigerator, and they’ll be just fine.  I’d cut them right before you want to serve them.  Enjoy! 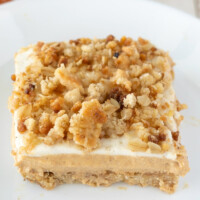 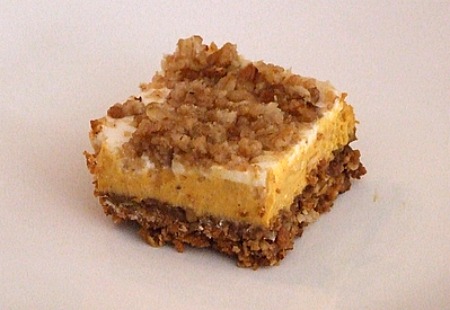