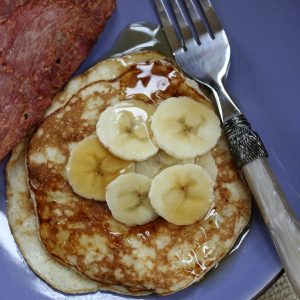 Have you noticed these 2-Ingredient Pancakes floating around on the internet??!  Watch the short video showing you how to make these pancakes, then scroll to the bottom of this post and print out the recipe so you can make them at home. 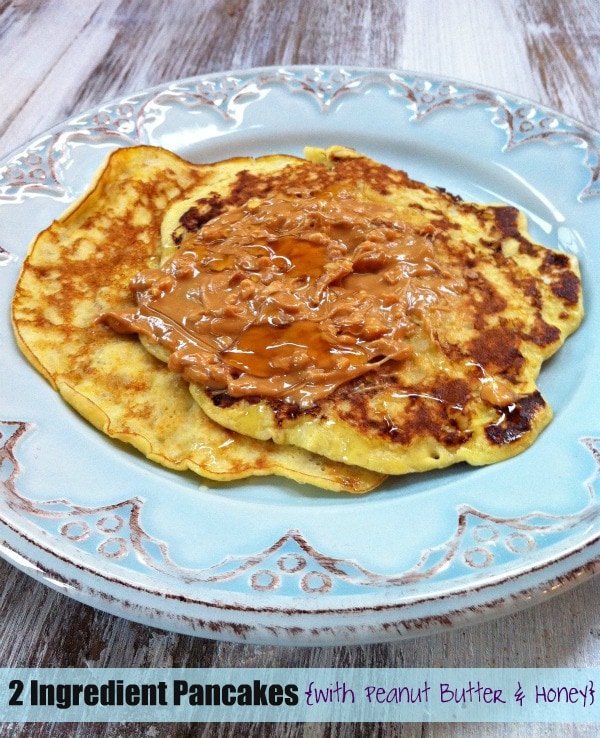 Maybe I’m late to the party, but my son and I have been seeing these all over the internet.  He made them first and shared his version of 2-Ingredient Pancakes on his own blog last week.  We gobbled those down very quickly.  So I thought it would be a good time to share some healthy pancakes here on RecipeGirl.

Since I’ve been trying to cut down on consuming too much bad food in general, I’ve been a little enthusiastic about trying out different variations of this crazy “pancake” concoction. It’s a fun little recipe that everyone should know about (especially my gluten-free friends and anyone watching their weight).  So I’ll share the basic recipe with you here and some suggested ways to play around with 2 Ingredient Pancakes. 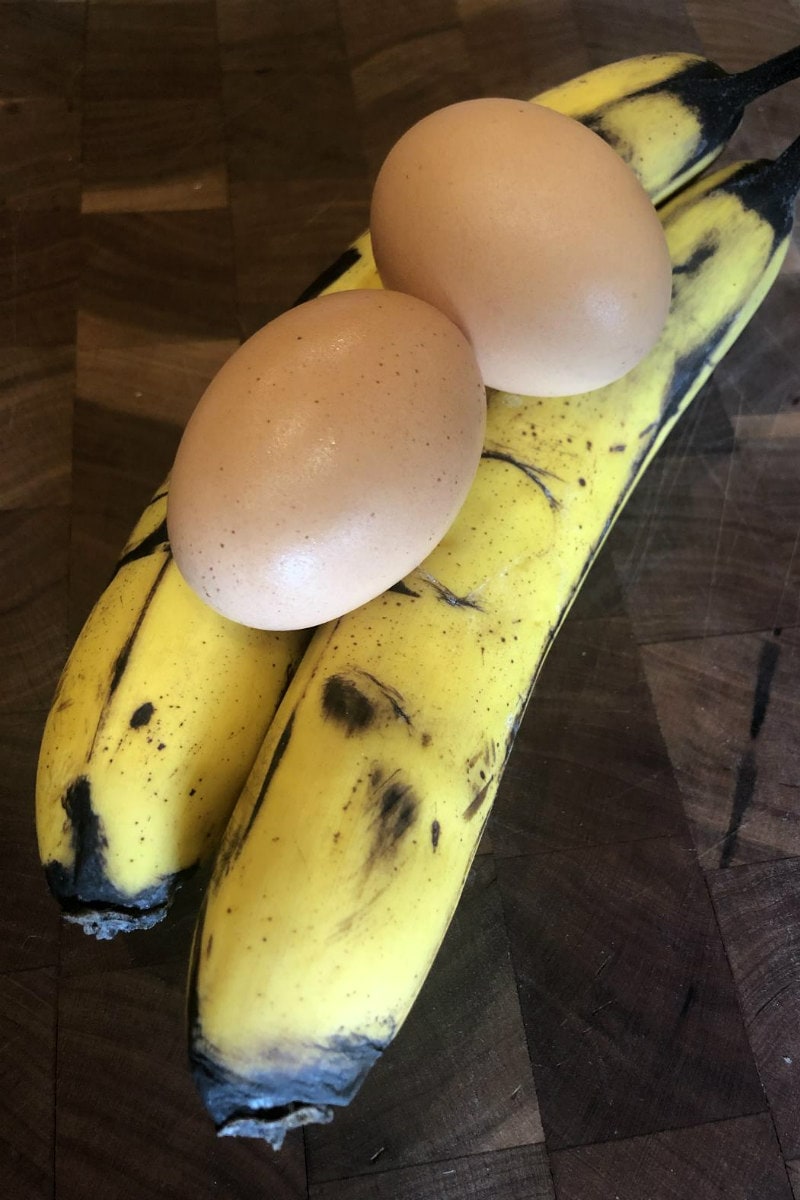 The 2 secret ingredients are: Mashed Ripe Banana and Egg. That’s it. No flour, nothing else. Just banana + egg. Isn’t that crazy?  If you happen to be following the Weight Watchers program, there is a link in the recipe to WW, so you can figure out the points for your program.

So in this first version you see in the first photo of the post, (for only me) I used about 1/3 cup mashed banana + 1 egg. Stir it all up and fry it like a pancake. I topped this one with crunchy peanut butter and a little bit of honey. What does it taste like? Well… it tastes a lot like a banana pancake. It’s not fluffy like a regular flour pancake, but it provides a fairly good simulation of a normal pancake.  It’s definitely NOT the same (so don’t expect that), but I think it’s pretty darn good. 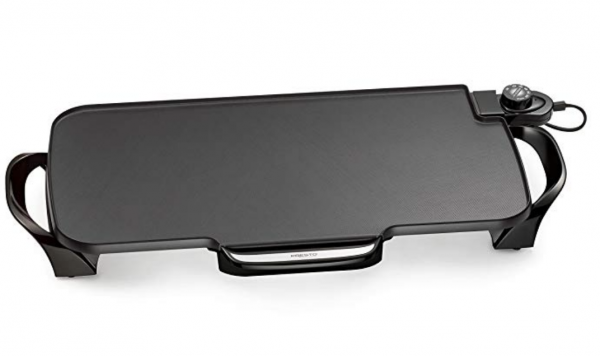 If you’re in need of a good griddle for pancake making, here is the griddle I recommend:  Presto 22-inch Electric Griddle.  I got tired of trying to make pancakes in my nonstick frying pans, so after all these years I finally splurged and bought this griddle.  I love it!  We make pancakes and French toast often on the weekends, so it comes in handy.  It’s also great for making a bunch of grilled cheese sandwiches at the same time! 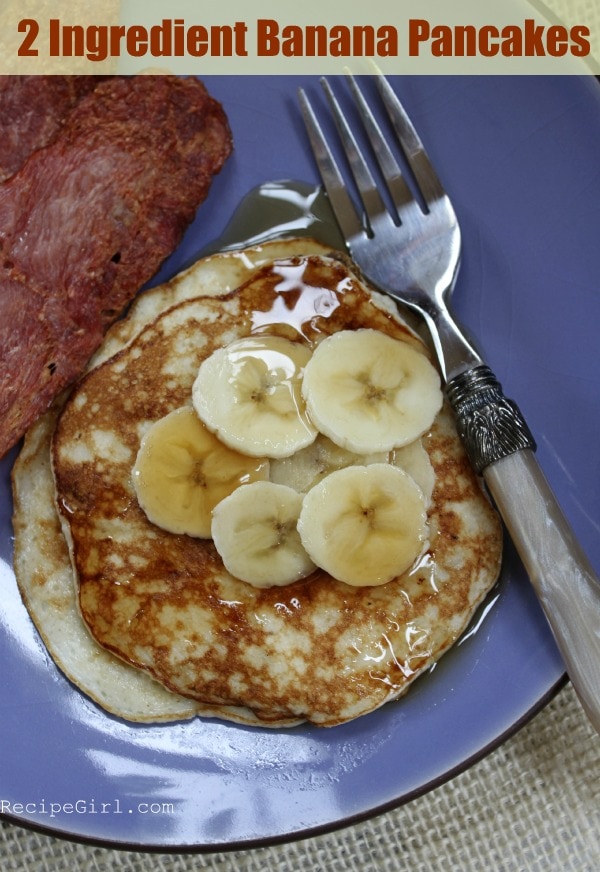 For this second version, I tried using just egg whites.  I used about 1/4 to 1/3 cup mashed banana + 2 tablespoons egg whites, then topped it with a few banana slices and a quick drizzle of light maple syrup. This one definitely tasted like banana pancakes. It was a little lighter in texture than the version above where I used a whole egg. All in all it was still rather good, though I preferred the version where you use the whole egg (plus, I like the idea of that added protein).

So what do you think… are you intrigued enough to try them?  I’d definitely encourage you to play around with the ingredients a little bit- there isn’t an exact ratio of egg to banana or anything. You could always mix in a tablespoon or two of almond flour to get a more substantial pancake, or top the classic version with Nutella and strawberries too. 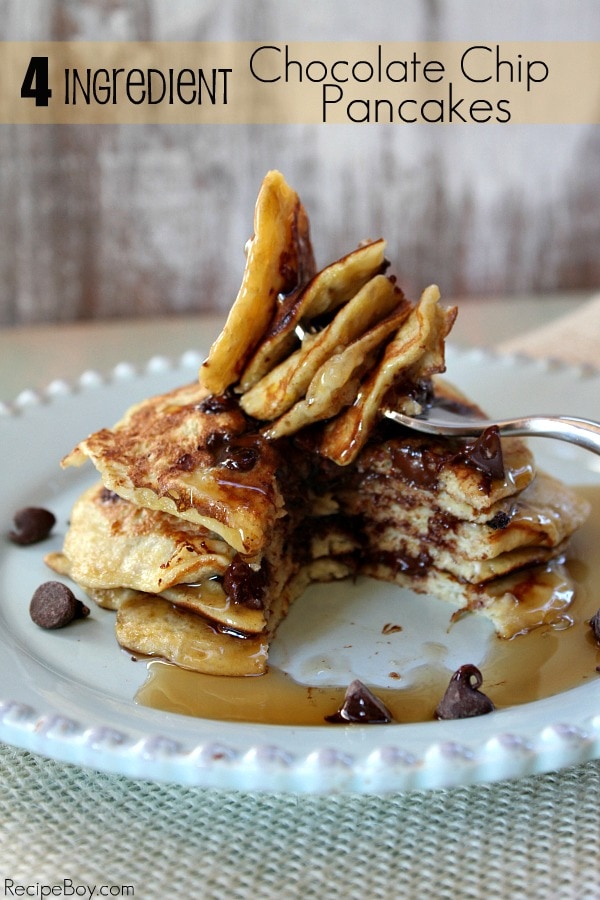 And be sure to check out my son RecipeBoy’s version too: 4 Ingredient Chocolate Chip Pancakes. His actually look much better than mine!  And if you like adding chocolate to your pancakes, his recipe is a good option!  They’re a little fluffier than my version, for sure.

And if you’re looking for pancake recipes that are not quite as mainstream, try these: 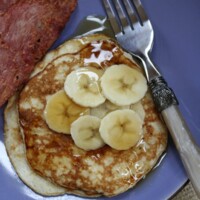 Pancakes with just two ingredients... toppings not counted, of course!  This recipe is for the basic version. Contribute add-ins, as desired.