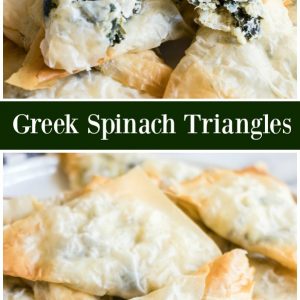 My Mother has been making these Greek Spinach Triangles for the past 40 years. She bakes them up during her annual Christmas party and there is never a bite left. Don’t be afraid of the phyllo dough! This one is worth the effort. 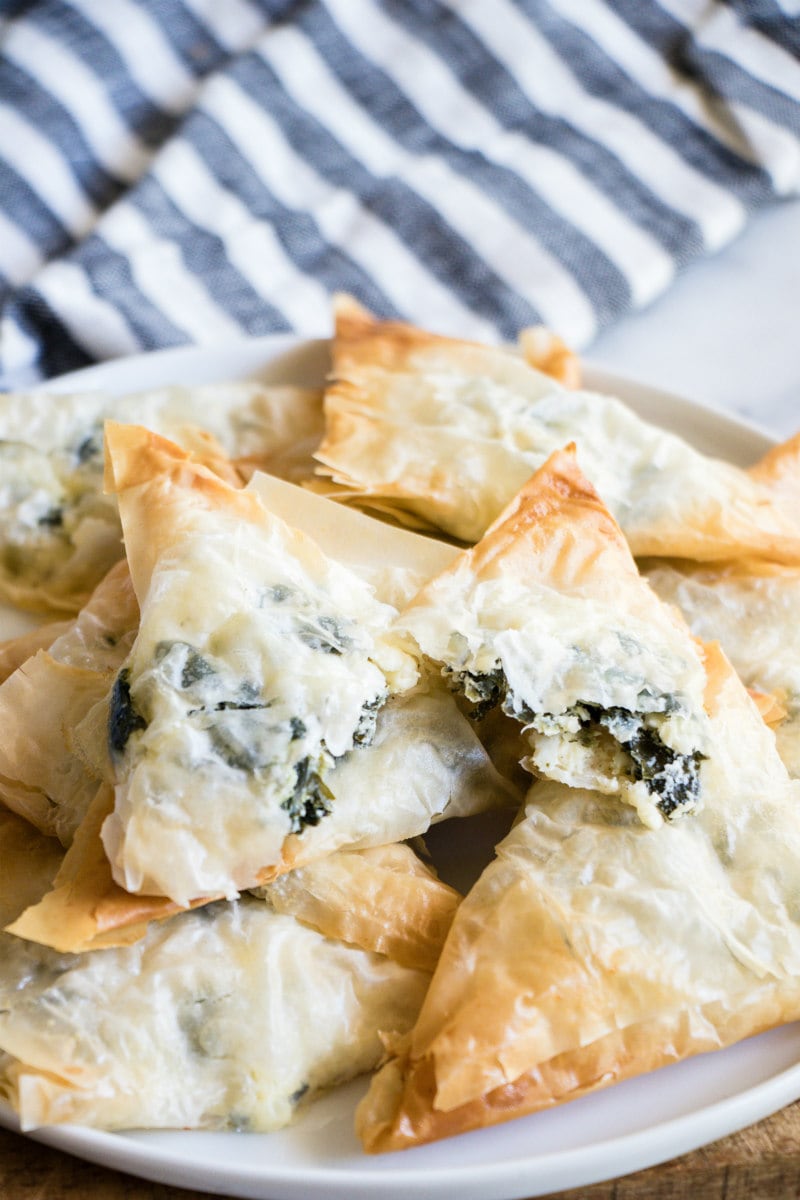 What are Greek Spinach Triangles?

These Greek Spinach Triangles are a hand-held appetizer that is served warm.  A spinach and cheese mixture is wrapped in butter-brushed phyllo dough and baked until crisp.

Are these Greek Spinach Triangles an authentic Greek recipe?

This recipe is not an authentic Greek recipe.  And I have to tell you that because there will be some folks out there who will be wondering why it’s labeled as “Greek” when it’s not a recipe that actually came from Greece.  It’s a Greek style appetizer, and that’s all it is.  I’m sure they make a Spanakopita appetizer in Greece that is similar and much more fabulous than this one.  This is simply my Mom’s Greek Spinach Triangles appetizer recipe that is great to serve at parties! 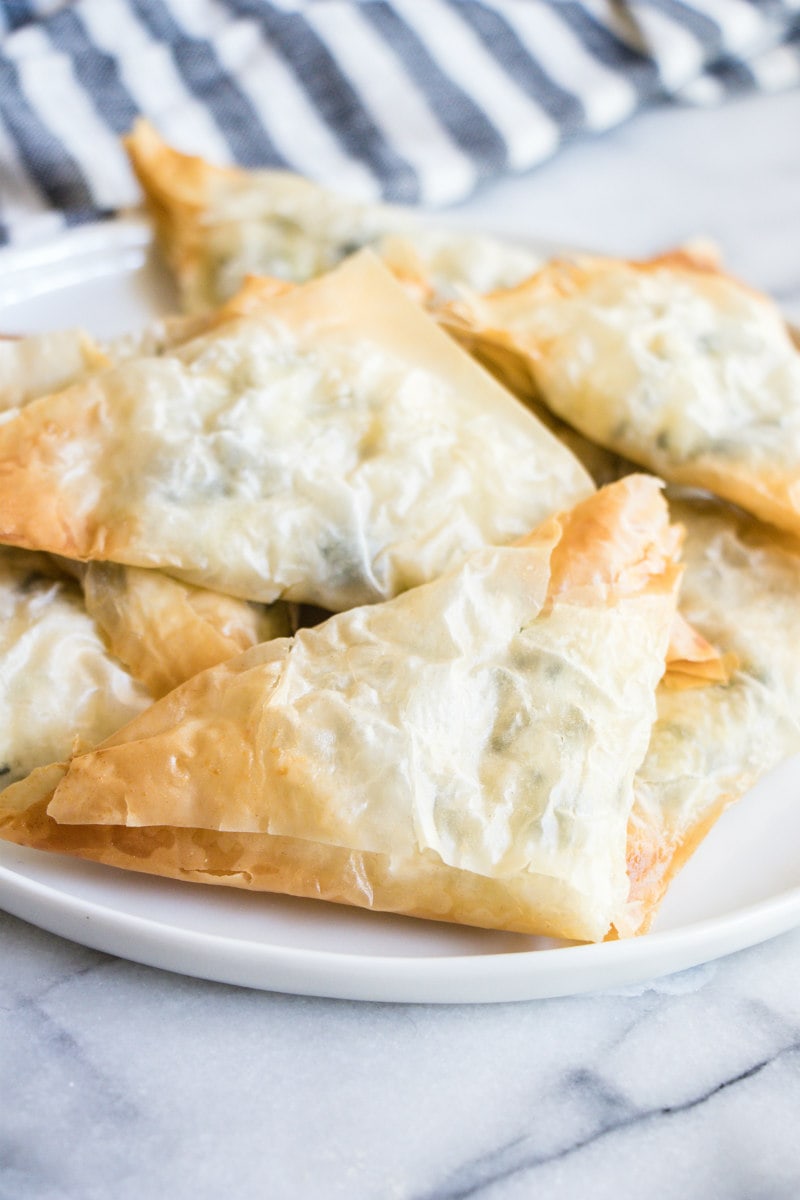 What is phyllo dough, and where can you buy it?

Phyllo dough (also known as filo) is a very thin (tissue thin), unleaved dough used for pastries, appetizers and some main dishes.  Recipes that call for phyllo use layers of it brushed with butter.  It’s baked until the phyllo gets crisp.

Since Phyllo dough is so very thin, it can dry out quickly and tear easily when you’re trying to work with it.  The first important note is to let the phyllo thaw correctly.  Thaw it overnight in your refrigerator- unopened in the box.  You can keep it unopened and refrigerated for up to one month in your refrigerator.

Don’t open the box of phyllo until you’re ready to work with it.  Lay the stack of phyllo out, cover with plastic wrap, and then cover with a damp towel.  Keep it covered when you’re not working with it, and don’t leave it uncovered for more than a minute or two.  Work as quickly as you can.  When brushing the phyllo with butter, start brushing the butter from the edges to keep them from cracking or tearing, and brush toward the middle. 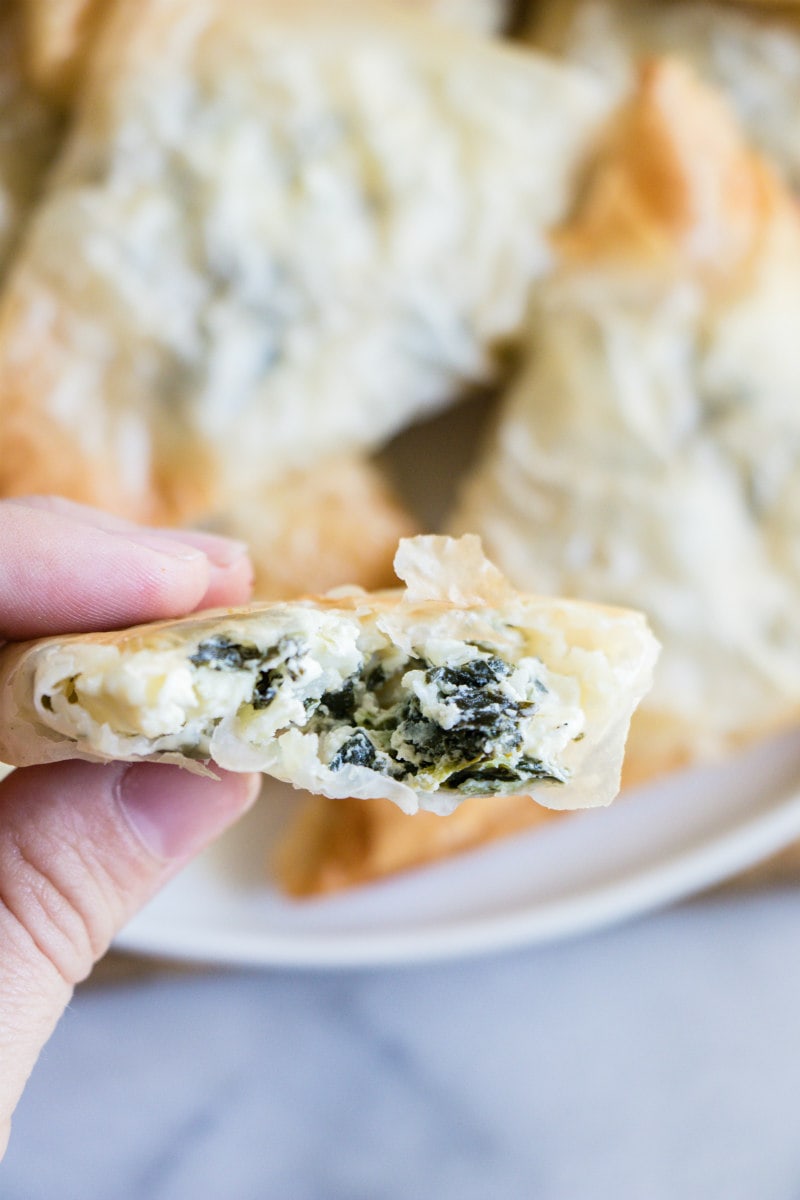 Can you make Greek Spinach Triangles ahead of time?

Yes!  This is a great appetizer to make ahead of time, and it’s actually meant to be made ahead of time.  My instructions have you preparing the triangles and freezing them in a single layer.  Then you can store them in a large zip bag or freezer-safe container until you’re ready to bake them.  They should be baked frozen- right from your freezer.

This is great recipe for when you just want to keep appetizers like this on hand for unexpected company.  Just pop some of them in the oven, and you have a delicious, homemade appetizer to share!  No dip is needed or anything like that.  These are a two-bite appetizer with plenty of packed-in flavor on their own.

If you’re looking for more recipes to make with frozen spinach, you might like to try these Spinach and Sundried Tomato Puff Pastry Pinwheels or my Spinach and Cheese Stuffed Manicotti. Spinach Balls, Spinach Palmiers and Lighter Spinach and Artichoke Dip are great spinach themed recipes too! 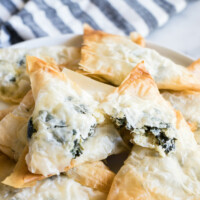 Print Pin Save Saved!
5 from 8 votes